Jorge Mario Bergoglio was archbishop of Buenos Aires from 1998 to 2013 and president of the Argentine bishops’ conference from 2005 to 2011. During these years, as church officials in the US and Europe began addressing the catastrophe of child sexual abuse by clergy – and even as Popes John Paul II and Benedict made public statements – Bergoglio stayed silent about the crisis in Argentina.

In his many homilies and statements (archived on the Buenos Aires archdiocesan website), he attacked government corruption, wealth inequities, and human sex trafficking, but he said nothing about sexual violence by priests.

In On Heaven and Earth (first published in Spanish in 2010), a wide-ranging collection of conversations with Argentine rabbi Abraham Skorka, he suggested in fact that the problem did not exist in his archdiocese:

Bergoglio’s implication, that he handled no abusive priests, is implausible. Buenos Aires is Argentina’s largest diocese, and Bergoglio was one of its top executives from 1992 to 2013 – a period when tens of thousands of victims worldwide reported their abuse to the Church. Based on data disclosed in dioceses in the US and Europe, we estimate conservatively that from 1950 to 2013, more than 100 Buenos Aires archdiocesan priests offended against children and that dozens of them were known to archdiocesan supervisors, including Bergoglio.

BishopAccountability.org presents this overview of Bergoglio’s role and the abuse crisis in the Argentina church in the hopes of facilitating more disclosure and understanding of Pope Francis’s approach to this grave and pressing issue. We highlight Bergoglio’s involvement in five cases, the current response to abuse by other Argentine bishops, and the unusually important role of whistleblowers. Finally, we provide an in-depth database of accused Argentine priests.

Our first non-US database, this marks the launch of our global coverage; we eventually will produce accused priest databases for all countries with significant Catholic populations. (Also see the database in Spanish.)


We can hear Francis' defenders, "It is impossible to know everything that happens in a diocese.  If abuses did happen, in all probability Francis didn't know about it."  BishopAccountability.org has an answer and presents evidence which should lay that line of thinking to rest.

The factors that have produced disclosure by bishops and religious superiors in other countries – civil action by victims, investigations of the church by prosecutors, and governmental inquiries – have occurred little or not at all in the Federal Capital of Buenos Aires, which is the territory of the archdiocese. As a result, almost no information has emerged about Cardinal Bergoglio’s direct management of accused priests. Only one Buenos Aires archdiocesan priest – Carlos Maria Gauna – has been publicly accused. But in the high-profile cases of four child molesters from religious orders or other dioceses – Grassi, Pardo, Picciochi, and Sasso – there is evidence that Bergoglio knowingly or unwittingly slowed victims in their fight to expose and prosecute their assailants. Victims of all four offenders say that they sought the cardinal's help. None of them received it, even those who were poor, struggling on the periphery of society – the people whom Pope Francis has championed. (According to Bergoglio's former spokesman, the cardinal declined to meet with victims.)

• Fr. Julio César Grassi – Grassi was convicted in 2009 of molesting a boy who had lived in a home for street children that Grassi founded. After Grassi’s conviction, Bergoglio commissioned a secret study to persuade Supreme Court judges of Grassi's innocence. Bergoglio’s intervention is believed to be at least part of the reason that Grassi remained free for more than four years following his conviction. He finally was sent to jail in September 2013. See our detailed summary of the Grassi case with links to articles.

• Fr. Rubén Pardo – In 2003, a priest with AIDS who had admitted to his bishop that he had sexually assaulted a boy was discovered to be hiding from law enforcement in a vicarage in the archdiocese of Buenos Aires, then headed by Bergoglio. Pardo also was reportedly hearing children's confessions and teaching in a nearby school. One of Bergoglio’s auxiliary bishops, with whom he met every two weeks, appears to have lived at the vicarage at the same time. Typically, an ordinary must give permission for a priest to live and work in his diocese. It is unlikely that Pardo lived and ministered in Buenos Aires without Bergoglio's approval. See our detailed summary of the Pardo case.

• Brother Fernando Enrique Picciochi, S.M. – After a victim discovered that his abuser had fled Argentina to the US, eluding law enforcement, the victim sought Bergoglio’s help in getting released from the confidentiality order imposed by the cleric’s religious order. He conveyed his request in meetings with Bergoglio’s private secretary and with the auxiliary bishop, current archbishop Mario Poli. The archdiocese would not help. See our detailed summary of the Picciochi case.

• Fr. Mario Napoleon Sasso – In 2001, following a diagnosis as a pedophile at a church-run treatment center, Sasso was made pastor of a very poor parish with a community soup kitchen in the Zárate-Campana diocese. In 2002-2003, he sexually assaulted at least five little girls in his bedroom off the soup kitchen. In 2006, with Sasso in jail but not yet convicted, the parents of the little girls reportedly sought Bergoglio's help. Bergoglio was then president of the Argentine bishops' conference, and the soup kitchen was just 25 miles from the Buenos Aires archdiocese. Bergoglio would not meet with them. See our detailed summary of the Sasso case.

• Rev. Carlos Maria Gauna – Gauna was an archdiocesan priest under Bergoglio's direct supervision. In 2001, two girls at a school filed a criminal complaint saying Gauna had touched them inappropriately. Bergoglio reportedly was going to look into it. Gauna still works in the Buenos Aires archdiocese. Notably, he's now a deacon and a hospital chaplain – possible indicators that Bergoglio considered the allegations credible but decided to demote him rather than remove him from ministry. See our detailed summary of the Gauna case.


To read more on this subject go to BishopAccountability.org or click here to read the  report, Pope Francis and Clergy Sexual Abuse in Argentina.  Why bring this up?  On Monday, 7 July 2014, Francis is to meet privately with eight victims who were sexually abused by priests.  We here at Call Me Jorge... believe this is a public relations ploy and nothing else.  Recall, some of Jorge Bergoglio's recent behavior since he was elected to office. 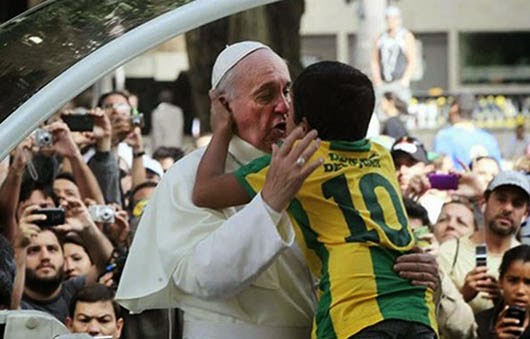 Posted by hereisjorgebergoglio at 12:20 AM

Email ThisBlogThis!Share to TwitterShare to FacebookShare to Pinterest
Labels: BishopAccountability.org, clergy, meeting with sexual abuse survivors, pederasty, pedophiles, sex with children, sexual abuse & clergy in Argentina, sodomy, Who am I to judge?