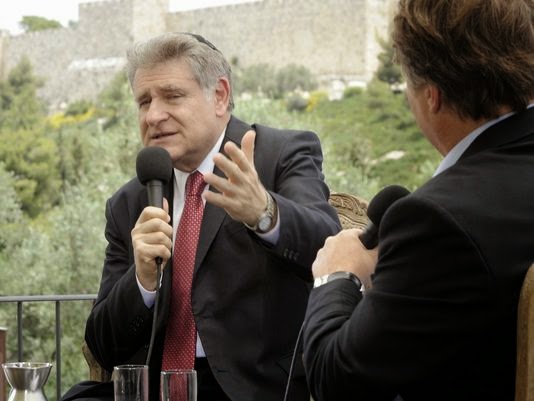 Rabbi Skorka wrote a column today, El viaje del Papa a Tierra Santa: Palabras claras y acciones valientes, 1 July 2014, for Valores Religiosos in which he explains Francis' trip to the Holy Land.  Skorka sees Francis in the same fashion he sees Jesus, as a prophet of the Old Testament.  One who has been commanded by God to give voice to the poor and marginalized of the world, to tell their leaders to get their houses in order.  He also alludes to Francis being a symbol to extremists that despite the extremists best efforts, in the end inter-religious dialogue will bring peace to the world.  (Yeah, a peace under the Talmudic Noachide Laws.)  Lastly, Skorka calls for more inter-religious prayer meetings for peace to help defeat these same extremists.

The pope's trip to the Holy Land: Clear words and courageous actions
by Rabbi Abraham Skorka*

Pope Francisco defined his journey to the Holy Land with the word "pilgrimage", which he said was the essence of his visit to Jordan, Palestine and Israel. Amen (so be it) of the multiple moments of prayer and meeting with leaders of the various Christian denominations, Jews and Muslims, in order to strengthen the bonds of inter-religious dialogue, the Pope had to face the dramatic conflicts between the peoples of the Middle East.  With that term the Pope intended  to throw (off) any possibility of interpreting his trip as purely political one in order to achieve solutions to the difficult problems of the region.  (Francis was) Not intending to act as a mediator between political, economic and strategic interests. It (Francis' purpose) was to cry out for the dignity of every individual, whose palpitations --according to the story of the biblical text of Genesis-- (are) a breath of the Creator. Bergoglio acted according to the paradigm of the Prophets of Israel. These messengers of God loudly expressed sharp criticism against those responsible for the evils that were committed both within their people, (and) in other nations, as described, among others, in the book of Jonah.  The God of the Hebrew Bible, which Jews pray to, (as well as) Christians and Muslims, is not indifferent to the work of each individual, he wants to be honored by the application of justice and the development of profound feeling of love.  The prophets were sent by God to awaken the consciences of men.  His words involving political issues.  Criticized corrupt judges, dishonest officers, the petty priests and all those who from a position of power supported a reality that exploited one another.  His platform was not political, no social aspirations of leadership are in them. They were masters of the spirit.  From a Jewish perspective, Jesus can be seen as a teacher who continues the path of the Prophets.  (In the first chapter of his book "Jesus of Nazareth", Ratzinger, draws a parallel between Jesus and Moses, the greatest of the prophets).  Pope Francisco understood that prophetic fire which must give its message to the world. Clear and compelling words. Committed and courageous actions. The trip to the Holy Land had many points (which) had to be filed down and superlative efforts are required to overcome differences. The meeting of prayer for peace could only be achieved through great efforts and dedication. It is from this perspective that the trip made ​​by the Pope in the Middle East should be analyzed. Not to look forward from one day to the next for their work of magic to be reached, the reality of peace.  But on the other hand, millions in the world, among whom were surely many that support extremists and fanatical ideas --saw Jews, Christians and Muslims together, invoking peace through a prayer meeting.  In a global reality in which the sensitivity that allows (one) to perceive the subtle message of a profound encounter in search of spirituality, is constantly undermined, the Pope sought the assistance of Peres and Abbas to issue a cry, like the ones God told the Prophets should exclaim.  A few days of this pilgrimage, in which I had the honor and spiritual satisfaction to take part in, informed the media about acts of vandalism in the region. The extreme fanaticism, blaspheming, invoking the name of God to defile and destroy his work, was also apparent in all its horror.  Destructive actions covered with dense and dark clouds on horizon seem to form as a monstrous response to the proceedings.  However, history, life, teaches us, these gloomy skies will only dissipate with the power of the sensible word, the one which vibrated in the Vatican gardens, for the hope of a better reality is still intact.

*Rabbi of the Community "Banei Tikva." Rector of the Latin American Rabbinical Seminary.