Monsignor Joseph Clifford Fenton was a priest of the diocese of Springfield, Massachusetts, ordained in 1930. He taught at the Catholic University of America and served as editor of the American Ecclesiastical Review from 1943-1963. In 1931, he received his doctorate degree in Sacred Theology from the Angelicum in Rome. His dissertation was written under the direction of Fr. Reginald Garrigou-Lagrange, O.P. (d. 1964) and was published in expanded form ten years later as The Concept of Sacred Theology (Bruce Publishing).

Under Pope Pius XII, Fenton was named monsignor and received various papal honors (source). He published numerous books and distinguished himself as a gifted, competent, and orthodox Catholic theologian entirely loyal to the Magisterium of the Church. Over the years, Fenton battled many Modernist errors and engaged in heated polemics with their proponents. In particular, he forcefully refuted the error of religious liberty promoted by Jesuit Fr. John Courtney Murray, which later became Novus Ordo doctrine. At the Second Vatican Council (1962-65), Fenton was a theological expert (peritus) for Cardinal Alfredo Ottaviani, the then-Secretary of the Holy Office, who was also a personal friend of Fenton’s.

A number of Mgr. Fenton’s personal diaries have been preserved in an archive of the Catholic University of America. Now, for the first time ever, these journals have been scanned and made available online for worldwide public perusal. We are pleased to share the links with you in an effort to further a greater and more accurate understanding of the true history of the Second Vatican Council and the theological struggles that occurred between Catholics and Modernists before, during, and after the council.

What follows is a list of links to the individual diaries available — numerous explosive quotes from the various journals are found further below in this post.

Mgr. Fenton’s Diaries Online
(in chronological order — titles are Fenton’s own)
Please Note: Each link leads to a downloadable PDF file; these files are large (anywhere from 20 to 150 MB each), so keep this in mind as you try to download or open them.

These diaries, which also provide unique insight into the mind of the competent and zealous anti-Modernist Fenton and make known interesting details about other theologians, are sometimes quoted and cited in various scholarly publications, such as the multi-volume History of Vatican II by Giuseppe Alberigo/Joseph Komonchak. 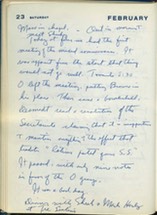 We have had photocopies of a number of these diaries in our possession for a while, and were eventually going to scan and publish them, but we are delighted to see that this work has now already been done for us by the Washington Research Library Consortium.

Of greatest interest to most, of course, will be what Fenton wrote about his struggles against the Modernists during the pontificate of Pope Pius XII, when a lot of errors were being fought that later resurfaced at Vatican II, and about the council itself and the theological discussions that took place behind the scenes. Fenton had a direct connection with Cardinal Alfredo Ottaviani at the Vatican, which gave him much more influence than other theologians had, and also more inside information.

For example, Fenton knew that the Holy Office under Pope Pius XII was preparing to condemn Fr. John Courtney Murray, S.J., and also Jacques Maritain for various doctrinal errors — a condemnation which, however, came to an abrupt halt when Pius XII died on October 9, 1958 (see "The Censuring of John Courtney Murray”, Part II, by Robert Nugent in The Catholic World [Mar/Apr 2008]) and didn’t materialize after the Modernist Angelo Roncalli (“Pope” John XXIII) usurped the papal throne later that same month. In fact, Roncalli made Murray a theological expert at the council, and his successor, Giovanni Battista Montini (“Pope” Paul VI), later elevated Murray’s error on religious liberty to official conciliar teaching.

Though Fenton assisted Ottaviani with drafting various preliminary documents (schemata) for the council to be debated on the floor, at the order of John XXIII all of them were discarded after the council began, and entirely new texts were drawn up in which the Modernist “New Theologians” had the greatest influence (names like Rahner, Ratzinger, von Balthasar, Congar, Chenu, Murray, and de Lubac come to mind). Good Mgr. Fenton was hospitalized several times during the council for heart problems, so he was not able to participate in the pre-conciliar and conciliar discussions and sessions at all times.

The Fenton diaries are of great import also because they give a glimpse into how this anti-modernist theologian tried to cope afterwards with the doctrinal, pastoral, and liturgical disorder the council had produced. Although, from all we have been able to ascertain, there is no evidence that Fenton was ever a sedevacantist, he also knew that the novel “recognize-and-resist” position, so popular among traditionalists (especially the Society of St. Pius X) today, was not an option. The idea of each individual believer sifting church teaching and then “resisting” conciliar errors, while still recognizing the council and the hierarchy as legitimate, was certainly foreign to him.

From what can be gleaned from his diaries, Fenton attempted — as did most priests at the time, of course — to reconcile the teachings of Vatican II with the prior, Catholic magisterium. We must keep in mind, however, that documents and other information back then were not as readily available as they are to us now, and certainly Fenton did not have the benefit of 50 years’ hindsight as we do today with regard to the Novus Ordo Church’s magisterial explanations, clarifications, and developments after the council, which have clearly resolved any ambiguity contained in the conciliar documents themselves in favor of error, not orthodoxy (religious liberty being a case in point).

In any case, Fenton’s journals are an incredibly valuable resource for the historical study of Vatican II, the Modernist errors, and the usurpation of the papal throne in 1958. We share the links to these diaries in order to allow the objective historical record to speak for itself, not to spin the post-Vatican II Fenton in any particular direction.

Mgr. Joseph Fenton died of a heart attack in his sleep on July 7, 1969, less than 5 months before Paul VI’s imposition of the Novus Ordo Missae as the liturgical norm in the Latin rite. The last diary entry is dated March 27, 1969. May he rest in peace.
We now proceed to present to you a select few striking and revealing quotes found in the Fenton diaries.

Highlights from the Fenton Diaries
Before, During, and After Vatican II:

Please share this information with anyone you know who loves the holy Catholic Church and is concerned about what has happened since the death of Pope Pius XII and the Second Vatican Council.