Most frighteningly for John Paul (II), he had come up against the irremovable presence of a malign strength in his own Vatican and in certain bishops' chanceries. It was what knowledgeable Churchmen called the "superforce."
-Keys of this Blood by Malachi Martin p. 632 -

Malachi Martin in his work, The Keys of this Blood: The Struggle for World Dominion between Pope John Paul II, Mikhail Gorbachev & the Capitalist West, posits The Judas Complex.  This thesis really deserves its own write-up as it is riddled with many errors but it suffices to say for this entry The Judas Complex is essentially the following;  The Pope is a traditionalist who has his every move and order blocked by the bishops who are Judases.  This started with the Second Vatican Council which has never been properly implemented and continues up to present day.

Mike has changed from his don't say bad things line about Francis it's spiritual pornography line towards one in which Francis is a good guy and the bishops are evil.  His proof?  Look at Summorum Pontificum it was put into effect by Benedict XVI without the support of the bishops and most have ignored it since.  Yep, "the bishops always hold all the cards!" according to Voris.  So don't criticize Francis, instead criticize the evil bishops.  Thank goodness this excuse doesn't cut it anymore.  Anyone who can use a search engine can look at the Vatican's own website and see Francis' actions, his speeches, etc... Who is buying this line Voris & Company are selling?  Another half honest part of video goes along the lines of,


If you can criticize the bishops why can't you criticize [Francis]?

The viewers of the Vortex must be jumping ship to "unapproved alternative Catholic groups" and Voris must recognize these groups as his competition for him to be so concerned about them.  Don't flee the Novus Ordo church!

Malachi Martin is earning handsome residuals in the land beyond the grave.  First from his false John XXIII prayer and now by providing excuses for apologists of Francis.  This logic which Voris is borrowing is laughable!  Didn't Voris just on the 18 March 2014 Vortex Tell the Pope, Not The World! tell the viewer to write letters to Francis?  Now, he is saying it is a waste of time because the bishops hold all the power!  Mike got us so fired up we wrote letters to our local bishops instead of Francis.  Feel free to use our sample letter as a template below.  According to Voris it is certain to help us win back our parishes!


We must criticize you and your behavior because Francis had Talmudic Jews and Evangelicals over to the Vatican for lunches.  Francis told blasphemous jokes to one group and to the other he said they need not convert.  After having both groups as guests he went and visited them where he apologized for the mean and nasty old church, you know the guys before glorious Vatican II.  To sum up our letter, we are mad that this happened and thanks goodness we watch the Vortex with Michael Voris and now know what to do!  Mr. Voris said on his show it was all your fault, so you better clean up your acts or else!  Start obeying Francis now!  One other thing is also your fault, Francis' favorite painting the White Crucifixion contains blasphemy against Our Lord's Most Holy Name.  See to it this is fixed or you'll be getting more silly letters from us!

P.S.  We included some photos and one video of one of your fellow bishops with the grievous abuse of distributing communion in the hand!  We find it astounding that this bishop has been transferred to Rome no less and unbelievably been promoted!  We reiterate these abuses by you must STOP!

links to points in letter


The Sixth Ecumenical Council, at Constantinople (680-681)

Forbade the faithful to take the Sacred Host in their hand, threatening transgressors with excommunication.

“Do not put the Eucharist in the hands of any layman or laywoman but only in their mouths.” 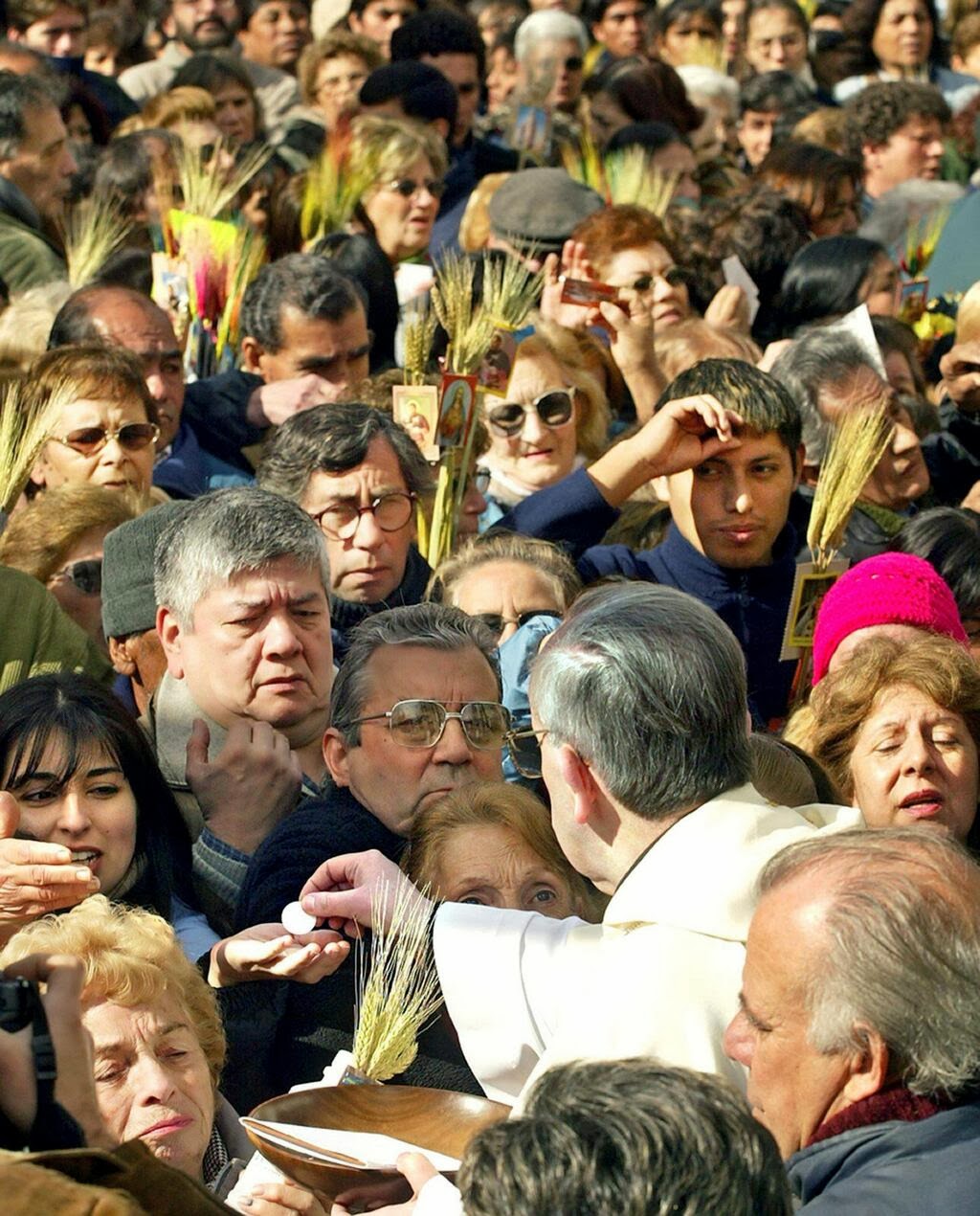 The Council of Saragossa (380)

Excommunicated anyone who dared continue receiving Holy Communion by hand. This was confirmed by the Synod of Toledo. 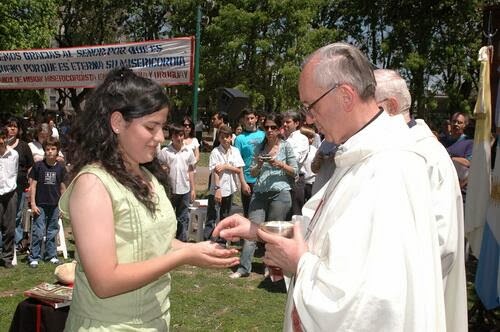 Forbade the faithful from taking the Sacred Host in their hand. 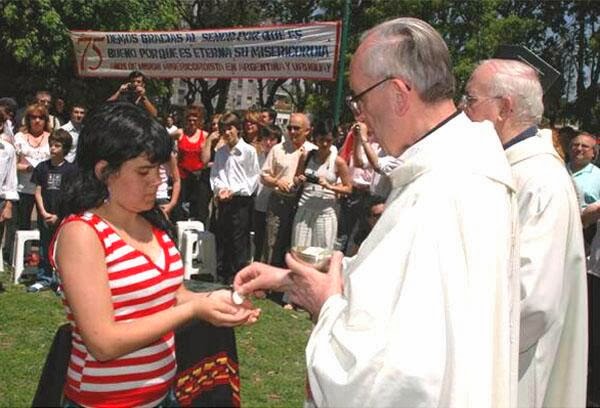 Energetically defended and required faithful obedience to the practice of administering Holy Communion on the tongue of the faithful. 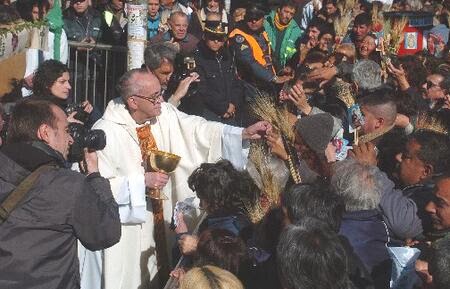 “The fact that only the priest gives Holy Communion with his consecrated hands is an Apostolic Tradition.” 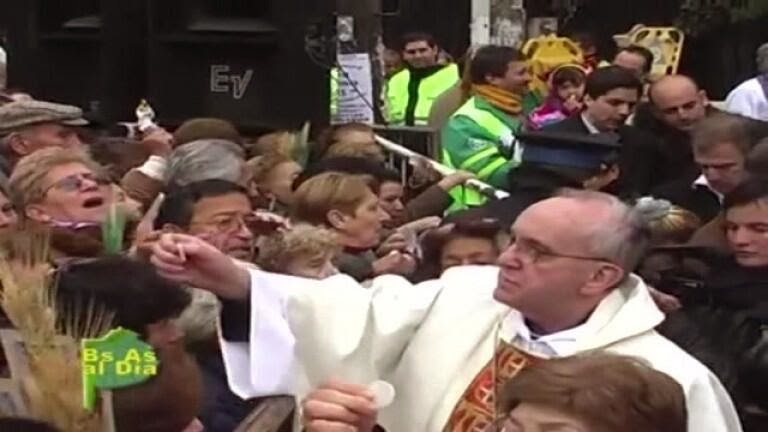 “The dispensing of Christ’s Body belongs to the priest for three reasons. First, because He consecrates in the person of Christ. But as Christ consecrated His Body at the Supper, so also He gave It to others to be partaken of by them. Accordingly, as the consecration of Christ’s body belongs to the priest, so likewise does the dispensing belong to him. Secondly, because the priest is the appointed intermediary between God and the people, hence as it belongs to him to offer the people's gifts to God, so it belongs to him to deliver the consecrated gifts to the people. Thirdly, because out of reverence towards this sacrament, nothing touches it but what is consecrated, hence the corporal and the chalice are consecrated, and likewise the priest's hands, for touching this sacrament. Hence it is not lawful for anyone to touch it, except from necessity, for instance if it were to fall upon the ground, or else in some other case of urgency.”
Posted by hereisjorgebergoglio at 4:18 AM