Francis meets with another Communist Francis met earlier today with Alexis Tsipras a communist and head of SYRIZA (Coalition of the Radical Left) in Greece.  Tsipras is a Greek MP and the Leader of the Opposition.  According to Wikipedia,

His domestic partner is Peristera Batziana, an electrical and computer engineer. The two met in 1987 at the Ampelokipoi Branch High School and both became members of the Communist Youth of Greece. They live together with their two sons.[15] Their youngest son's middle name is Ernesto, a tribute to Che Guevara. Tsipras is an avid football fan and, having grown up near the stadium, supports Panathinaikos, attending every home game that he can.[4] 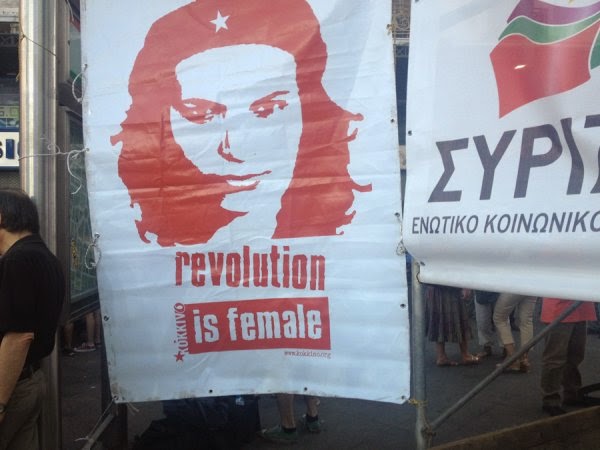 It has been reported that Francis and Tsipras met to discuss a "crisis of values."  The values they talked about included measures to help prevent deaths in Mediterranean Sea of the crossing illegal Muslim immigrants from Africa, global warming, achieving peace in the Middle East, and how they could save not only the banks of Europe but also the people.  Protothema News has the rest of the official story,

Moreover Pope Francis asked Alexis Tsipras to send his regards to Ecumenical Patriarch Bartholomew adding that he was looking forward to meeting him at the Phanar in Istanbul during the celebration of Apostle Andrew’s day.

“We had the opportunity to discuss about the economic crisis, which is primarily a crisis of values” said Alexis Tsipras after the meeting, adding that they talked also about “the need to have peace in the world”.

“We asked him to continue fighting and speaking for the human rights and dignity and to take the initiative for finding a solution for the Middle East crisis”, said Mr. Tsipras adding that he “told him about the dramatic situation of Greece, which after four years of strict austerity is still in deep recession”.


No word has come out, if the two discussed their favorite passion football or if jerseys were exchanged.  One cannot make stuff like this up.  Less than seventy years ago, it would have been unfathomable to have a communist to the Vatican as a guest unless it were to chew the man out and he would have been brought in through a back door, not as a guest!  With Francis however this is becoming more of an every day occurrence.  Recall what Francis was reported to have said in June by Reuters,

"I can only say that the communists have stolen our flag. The flag of the poor is Christian. Poverty is at the center of the Gospel," he said, citing Biblical passages about the need to help the poor, the sick and the needy.

"Communists say that all this is communism. Sure, twenty centuries later. So when they speak, one can say to them: 'but then you are Christian'," he said, laughing.


And don't forget when Francis was asked what it felt like to be called a "Marxist" by Andrea Tornelli in an interview he answered,

“The Marxist ideology is wrong. But I have met many Marxists in my life who are good people, so I don’t feel offended.”

Which lead us to ask is the Leninist ideology correct, maybe Stalinism, perhaps Gramscism, or is it Neo-Gramscism?  Dear reader, also notice how Francis doesn't come out and condemn communism in the above statement, just Marxism.  Michael Voris and his ilk will tell you Francis is surrounded by a "super-force" of evil bishops who are thwarting his ever move.  How about reporting on the un-Catholic actions carried out by Francis for a change Mike?


Francis meets with communist from Greece