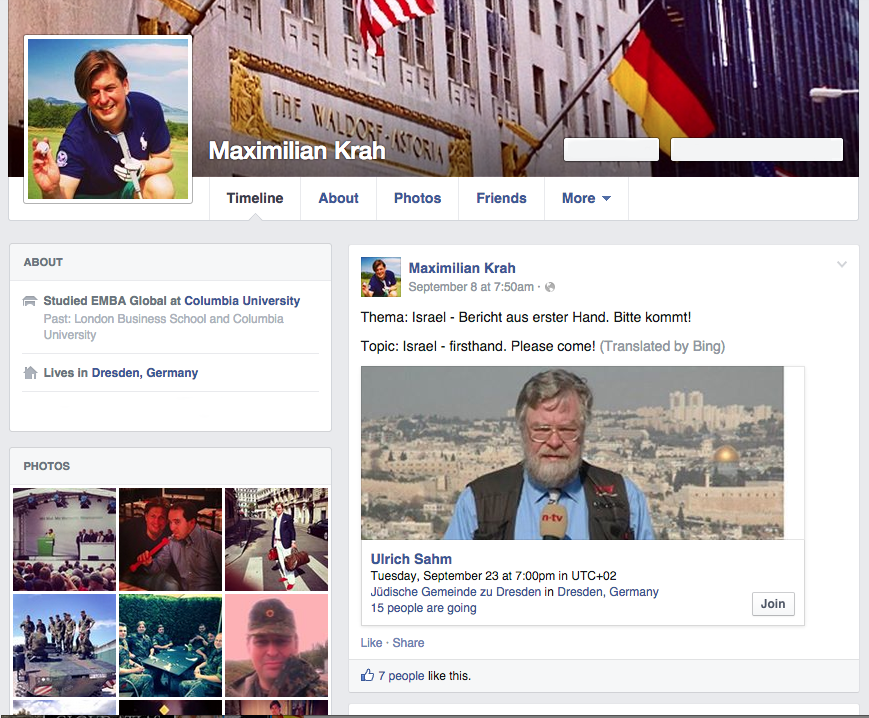 Our favorite uber-Zionist who helped create and administers funds for the Jaidhof Foundation to the FSSPX, has invited not only his friends but anyone who views his facebook page to hear Ulrich Sahm talk on 23 September 2014.  Mr. Sahm is an interesting person to the say the least.

His father, was a diplomat in Paris & London as well as served as ambassador to Turkey & the Soviet Union for the the German government of Willy Brandt (aka Herbert Ernst Karl Frahm). He was married to former abbess of Klosters Mariensee (a Lutheran convent) and later with Christiane von Alten. 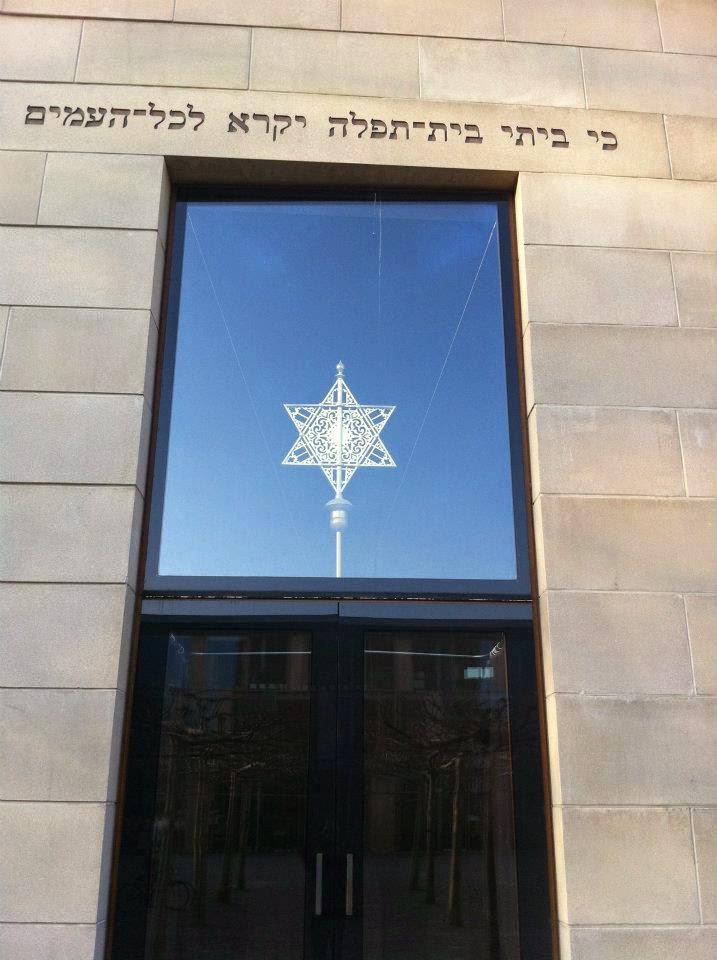 The Dresden synagogue where the talk is being held.
The inscription above the door reads, "My house shall be called a House of prayer for all peoples."

Now onto Ulrich Sahm, who Max Krah is inviting you to hear speak on Israel at a synagogue in Dresden no less!  This talk is organized and sponsored by Dig Deutsch-Israelische Gesellschaft Dresden of which Max is the co-chairman!  Mr. Sahm turns out to be a Lutheran who studied Judaism at university and fell in love with it.  So much he moved to Israel and completed further studies at Hebrew University.  Somewhere along the line Sahm became a reporter for various European television news outlets in addition to freelancing for an Israeli station or two. Sahm like his father has been married more than once.  His second wife is an Israeli who is a historian of Jewish folklore and a professional photographer.  She is the first Israeli photographer to have her photos exhibited at the Vatican.  Her name is Varda Polak-Sahm and she claims to be a secular Jew. 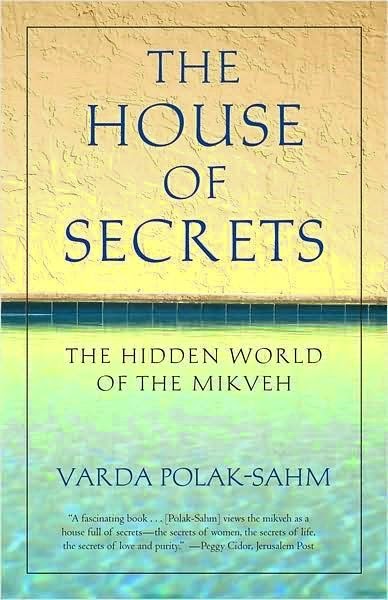 Varada Polak-Sahm wrote a book in 2009 named The House of Secrets: The Hidden World of the Mikveh.  A review below by Carol Poll on the Jewish Book Council website tells us what this book is about.  (The bolds are ours for emphasis.)


The mysterious world of the female mikveh (ritual bath) is fully and referentially revealed in The House of Secrets by Varda Polak-Sahm, a secular Sephardic Jerusalemite writer. Halakha (Jewish law), mandates that Jews practice taharat hamishipaha (rules of family purity) which states that a woman is in a state of niddah (ritual uncleanliness), when she is menstruating, seven days thereafter and after childbirth. At this time all physical contact with men is prohibited. To restore her “ritual cleanliness” and allow sexual contact with men, a woman must totally immerse herself in a pool of “mayim hayim” or “living water” which is natural and untouched by human hands.

To the secular skeptic, the female mikveh and rules of family purity may sound bewildering and misogynist. Polak-Sahm argues that the opposite is true. Based on her decade of research on mikvehs in Israel, she concludes that mikvehs function as “women’s temples” where female balaniyot (mikveh workers) address the needs of other women and women have full authority. The family purity rules serve to put total control of sexual contact in the woman’s hands for she alone decides when she will go to the mikveh and by not going she stops all physical contact with her husband. When she enters into a mikveh she is entering into a women’s world and performing an ancient female ritual. Even secular women report a sense of feeling cleansed by the mikveh and relish the joy of returning to have sexual relations with their “sexually starved” husbands who have waited two weeks to have physical contact with them.

The rules of family purity reflect the foundational underpinnings of Jewish law, which is “very precise in defining categories and drawing boundaries in all areas of life”— sacred and profane, male and female, forbidden and permitted, kosher and non-kosher. Immersion in a ritual bath as a means to attain ritual purity is a basic practice in Judaism and is used in the conversion process and by Orthodox men to achieve ritual purity before the Sabbath and holidays. Of course, in the traditional mikveh, strict sex segregation is practiced and men do not use a female mikveh.

Polak-Sahm supports her conclusions with vivid quotations from women who follow taharat hamishipaha and numerous quotations from biblical, rabbinical, sociological, anthropological, feminist, and Holocaust literature. For some readers, the degree of realism and specificity about the woman’s body and the process of checking for menstrual blood by the balaniyot may be offensive but it truly lifts the curtain on this world, often unknown to all but its participants. The author closes this captivating book with descriptions of two very innovative reinventions of the mikveh being done by two “pioneering” Jewish women, the Israeli attorney Shimrit Beinhorn-Klein in Israel and the renowned American author Anita Diamant in the Boston suburb of Newton.

The important part which seems to have been left out is the role the rabbi plays in this Talmudic obsession with a woman's menstrual blood.  If one looks up the Halakhic law codified in the Shulchan Aruch, one finds that a woman is considered Niddah until she appeases a rabbi (i.e. she has proved to him she has no more menstrual blood and has also ritually purified herself).  When she is Niddah she is not allowed to:  joke, laugh, make light-hearted conversation, play any sports or participate in sporting activities, may not wear make-up, may not touch her husband, hand objects to her husband, hand children to her husband, may not eat at the same table with her husband unless a divider is on the table so neither can see each other, may not visit a cemetery, etc... (and we only provided a few of the hundreds of rules the women must follow when in this state!)  For a sample of some of the rules concerning checking one's menstrual blood see, Hilchos Niddah handout.

So to recap Max Krah who plays the role of lawyer and trustee for the FSSPX is going to the synagogue to hear a fellow Zionist, Ulrich Sahm, talk about Israel & Judaism.  This same Sahm is married to a 'secular' Israeli who wrote a book which thesis is that the minutia of Halakhic female miveh is great! 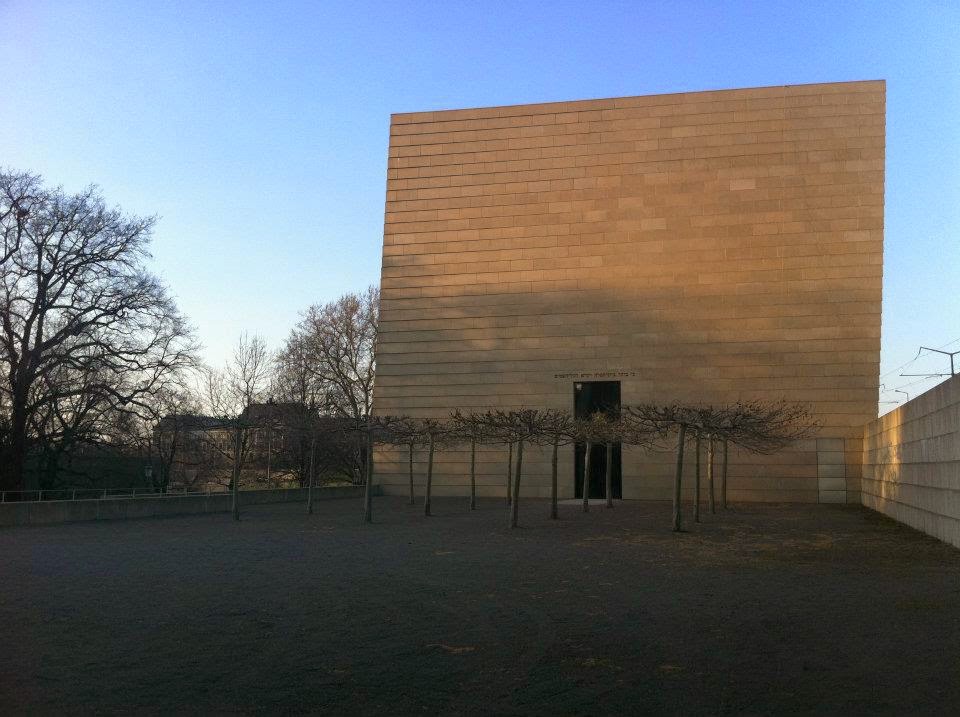 At 7:00PM 23 September 2014, you can go to the synagogue and have a Zionist tell you what to think!
Posted by hereisjorgebergoglio at 7:38 AM