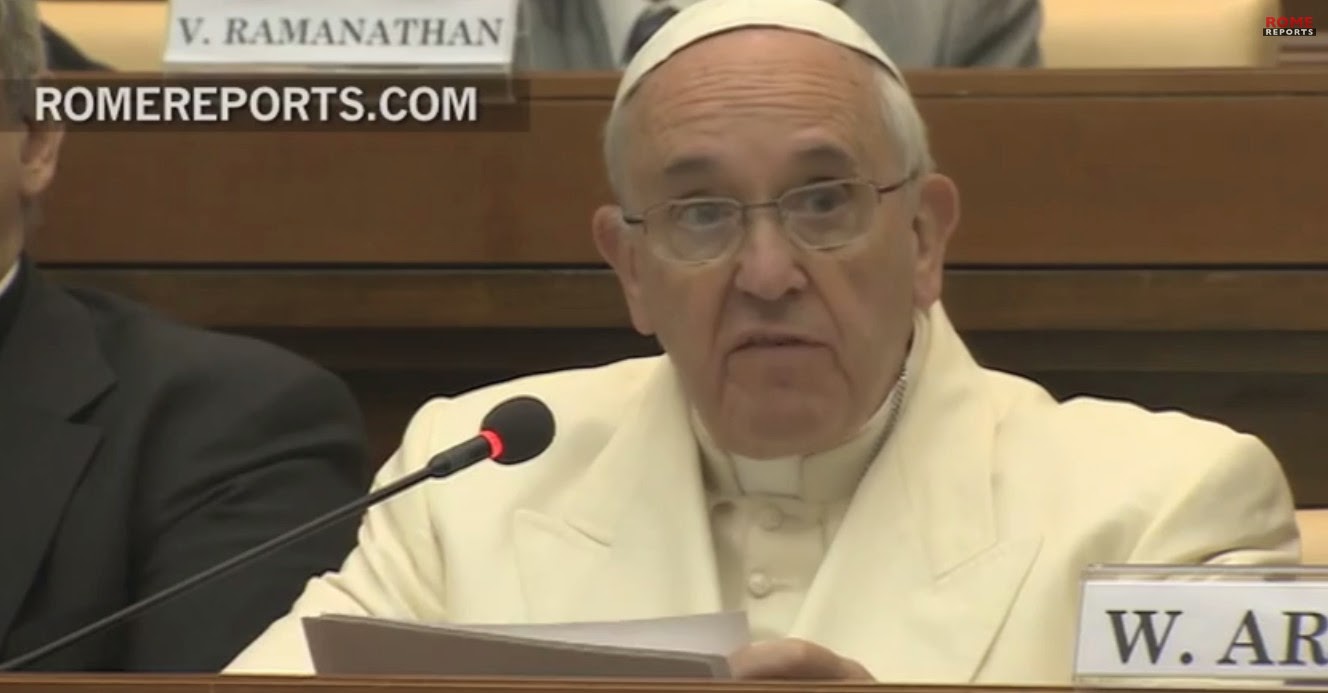 One thing about Francis is he never ever seems to take a day off.  This man says more in a week than Benedict XVI did during his entire pontificate!  Once we report about something Francis has said it is old news as he has usually uttered at least three things even worse in the meantime.  In the article, Pope Francis: ‘Evolution … is not inconsistent with the notion of creation’ by Josephine McKenna for the Religion News Service provided below we read several un-Catholic ideas.  We will only focus on the one underlined.

Pope Francis on Monday (Oct. 27) waded into the controversial debate over the origins of human life, saying the big bang theory did not contradict the role of a divine creator, but even required it.
The pope was addressing the plenary assembly of the Pontifical Academy of Sciences, which gathered at the Vatican to discuss “Evolving Concepts of Nature.”
“When we read about Creation in Genesis, we run the risk of imagining God was a magician, with a magic wand able to do everything. But that is not so,” Francis said.
“He created human beings and let them develop according to the internal laws that he gave to each one so they would reach their fulfillment.”
Francis said the beginning of the world was not “a work of chaos” but created from a principle of love. He said sometimes competing beliefs in creation and evolution could co-exist.
“God is not a divine being or a magician, but the Creator who brought everything to life,” the pope said. “Evolution in nature is not inconsistent with the notion of creation, because evolution requires the creation of beings that evolve.”
Unlike much of evangelical Protestantism in the U.S., Catholic teaching traditionally has not been at odds with evolution. In 1950, Pope Pius XII proclaimed there was no opposition between evolution and Catholic doctrine. In 1996, St. John Paul II endorsed Pius’ statement.
Some wondered if Pope Emeritus Benedict XVI wanted to change that when he and some acolytes seemed to endorse the theory of intelligent design, the idea that the world is too complex to have evolved according to Charles Darwin’s theory of natural selection. Cardinal Christoph Schoenborn of Vienna, a close associate of Benedict, penned a widely noticed 2005 op-ed in The New York Times that said “Evolution in the sense of common ancestry might be true, but evolution in the neo-Darwinian sense — an unguided, unplanned process … is not.”
Giovanni Bignami, a professor and president of Italy’s National Institute for Astrophysics, welcomed Francis’ comments, saying he had buried the “pseudo theories” of creationists.
“The pope’s statement is significant,” Bignami told Italian news agency Adnkronos. “We are the direct descendents from the Big Bang that created the universe. Evolution came from creation.”
Giulio Giorello, professor of the philosophy of science at Milan’s University degli Studi, said he believed Francis was “trying to reduce the emotion of dispute or presumed disputes” with science.
Francis made his speech while unveiling a bust in honor of Benedict, his predecessor, at the Vatican.
“Benedict XVI was a great pope: great for the power and penetration of his intellect, great for his significant contribution to theology, great for his love of the church and of human beings, great for his virtue and piety,” he said.


Because one always hears the excuse, Francis was mistranslated into English, we found an article on the official news site of the Vatican, News.VA.  Even though it is on the Vatican News' website it is an unofficial document.  From, Francesco ad Accademia Scienze: Benedetto XVI, grande Papa. Ampia sintesi by Radio Vaticano,


Our translation of the Italian into the English is as follows:

"When we read in Genesis the story of Creation we risk imagining that God was a magician, complete with a magic wand that make everything.  But (this) is not so.  He created beings and let them develop in accordance with the internal laws that He has given to each one, because they emerged (or developed) themselves; they arrived themselves at (their) own fullness.  He gave autonomy to the beings of the universe at the same time in which he assured them of his continued presence, giving the beings to all reality.   Thus, the creation has been going on for centuries, millennia and millennia until it became what we know today, because God is not a demiurge or a wizard, but the Creator who gives being to all entities. The beginning of the world is not the work of the chaos that has another of its origin, but is derived directly from a supreme Principle that creates with love.  The Big Bang, which today stands at the origin of the world, does not contradict the divine creator's intervention but demands it. Evolution in nature is not inconsistent with the notion of creation, because evolution requires the creation of beings that evolve."


The key word in the quote is 'demiurge'.  According to the entry for Demiurge in the Catholic Encyclopedia of 1908:

The word means literally a public worker, demioergós, demiourgós, and was originally used to designate any craftsman plying his craft or trade for the use of the public. Soon, however, technítes and other words began to be used to designate the common artisan while demiurge was set aside for the Great Artificer or Fabricator, theArchitect of the universe. At first the words toû kósmou were added to distinguish the great Workman from others, but gradually demiourgós became the technical term for the Maker of heaven and earth. In this sense it is used frequently by Plato in his "Timæus". Although often loosely employed by the Fathers and others to indicate the Creator, the word never strictly meant "one who produces out of nothing" (for this the Greeks usedktístes), but only "one who fashions, shapes, and models". A creator in the sense of Christian theology has no place in heathen philosophy, which always presupposes the existence of matter.


And the online The Free Dictionary has for demiurge the following:


1. A powerful creative force or personality.
2. A public magistrate in some ancient Greek states.
3. Demiurge A deity in Gnosticism, Manichaeism, and other religions who creates
the material world and is often viewed as theoriginator of evil.
4. Demiurge A Platonic deity who orders or fashions the material world out of chaos.

The American Heritage® Dictionary of the English Language

a. (in Platonism) the artificer of the world.
b. (in Gnostic and other systems) a subordinate supernatural being who created the  world and is regarded as the creator of evil.

So what did Francis mean by using the word demiurge?  Was it the Catholic thought of a demiurge or the Gnostic idea of a demiurge or the Platonist's version of a demiurge?  Being that he has shown in the past to make up his own definitions to terms (neo-pelagian comes to mind) who knows but Francis what he meant.  Francis is a modernist and always vague about what he says.  We at Call Me Jorge... would guess since he mentioned chaos in his remarks that he was talking about the Platonic diety who fashioned the world out of chaos.  One thing is safe to say Francis is all over the place in his words and ideas.  This is so the initiated few get his message while everyone else reads what they understand into it.  Just like the recent Synod on the Family, it matters little to the conservatives or the liberals what was said as both camps can spin into it their  own ideas and claim victory.  All this talk about demiurge takes the attention away from everything else Francis said to the Pontifical Academy of Sciences. 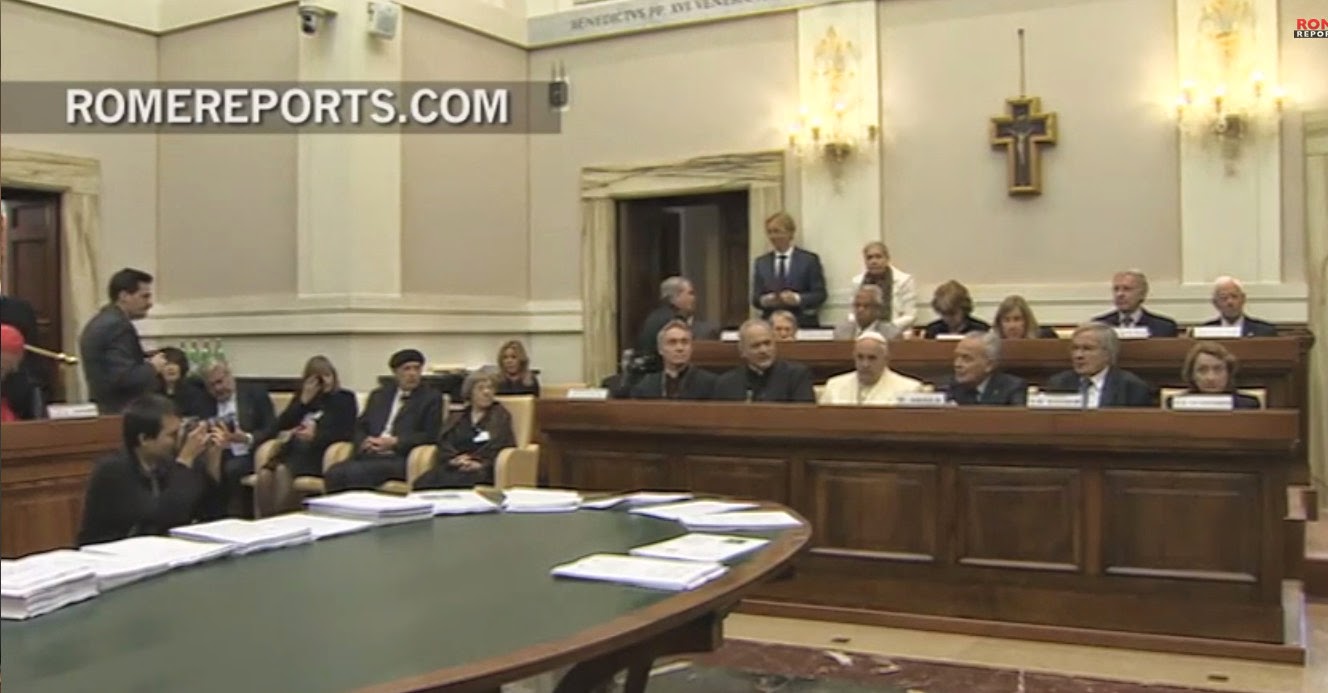 Francis addressing the Pontifical Academy of Sciences
Posted by hereisjorgebergoglio at 12:02 AM