Where did Our Lord Jesus Christ go? 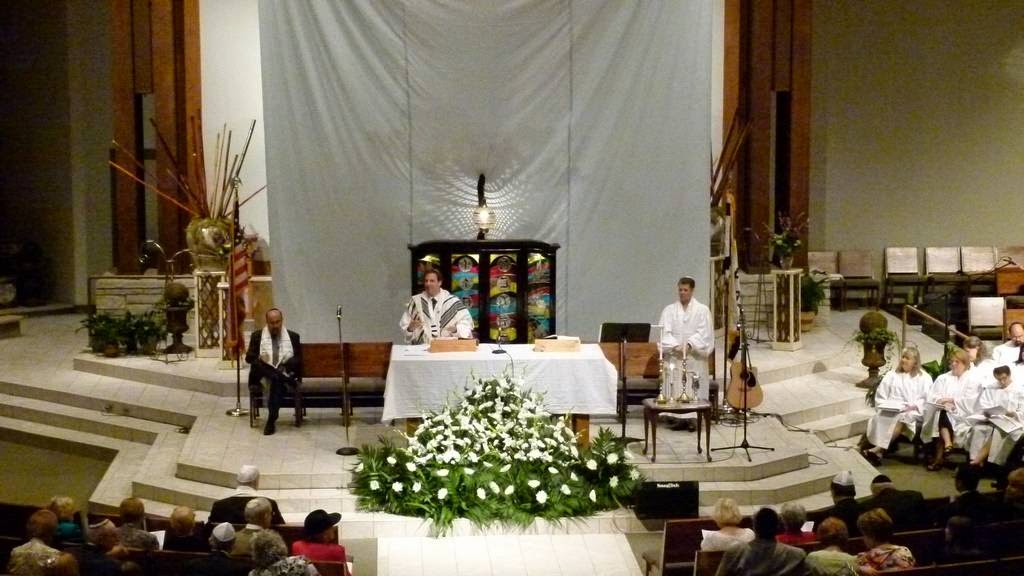 Using a curtain to hide a large sculpture of Jesus on the cross, the Holy Family Catholic Church in Inverness transforms its altar to host last week's Rosh Hashana service for the Beth Tikvah congregation in nearby Hoffman Estates. This is the 10th year the church has hosted services for the Jewish High Holy Days.

The trickiest part about hosting Beth Tikvah's Jewish holiday of Yom Kippur in the sanctuary of the Holy Family Catholic Church in Inverness is finding a discreet and sensitive way to hide Jesus.

From a suspended perch above the altar, a larger-than-life Jesus Christ reaches out from a clear, acrylic cross in Ernest Caballero's magnificent "Cross of New Life" sculpture, which is the focal point in the Holy Family sanctuary. The sculpture, which cost $750,000 when it was unveiled in 1997, measures 16-feet-by-12-feet and weighs nearly 2,000 pounds. But that overtly Christian imagery doesn't mesh with the most solemn of Jewish High Holy Days.

"So we lower it as far as possible and then put a white screen over it," says Heidi Rooney, communications director for Holy Family.

"My ancestors could have never imagined such a possibility," says Taron Tachman, rabbi of Beth Tikvah, a Reform Jewish congregation in Hoffman Estates that doesn't have space in its building for the crowds drawn to Rosh Hashana and Yom Kippur services. This Friday night and Saturday morning will mark the 10th year that Holy Family has hosted Beth Tikvah's High Holy Days.

"The fact that two religions are able to pray in the same sanctuary makes that space even more holy," Tachman says.

"To have our Jewish brothers and sisters atone and ask forgiveness in the same space (as we partake in) the Eucharist on a daily basis, to me, these two thing are very powerful spiritually," says the Rev. Terry Keehan, pastor at Holy Family.

A 10-minute drive from Holy Family, Beth Tikvah can accommodate only about half of the 400 to 500 people who attend High Holy Days services. To prepare for services at the Catholic church, a moving truck hauls the congregation's ark, which houses the Torah scrolls, banners and other items needed for the services, says Steve Pill, who lives in Palatine and serves as co-chair of the Beth Tikvah ritual committee.

Meanwhile, Holy Family not only hides the Jesus sculpture, but it also covers artwork depicting the 12 stations of the cross and even removes bulletins featuring the cross, Rooney says.

"Last year, at Rosh Hashana, we had two weddings," says Keehan, in a statement most priests never have occasion to utter. Both congregations work together quickly to transform the altar from Catholic to Jewish and back again.

No rental price is suggested, and Beth Tikvah makes a donation to Holy Family.

"We call it a mitzveh," Tachman says, using the Yiddish word for a good deed. "They look upon it the same way. It makes them feel good that we're doing this."

Members of both congregations overwhelmingly support the agreement, the rabbi and priest say.

"One year, I put my (priestly) collar on and handed out hymnals just to show them that not only do we welcome them, I welcome them, too," Keehan says. "It's all part of something we take as sacred, and that's welcoming people."

The church created controversy this summer when it fired longtime music director Colin Collette, after he announced online his engagement to his male partner. Keehan says that case involved the church's rules on employment and doesn't change the church's desire to welcome worshippers. Some of the congregation have rallied in support of Collette, and Keehan says a leadership team is working on those issues.

Instead of merely welcoming Beth Tikvah to share its space, the church and the synagogue began sharing thoughts this year as part of a dialogue series between the congregations.

"It's wonderful," says Pill, who explains that people quickly moved beyond the differences between Judaism and Catholicism and now focus on the ways each use religion in their day-to-day lives. "It is pure dialogue. It is not lectures."

"Our relationship goes deeper than just sharing a space," Tachman adds. "We share stories and we share our hearts."

At the core is a mutual "admiration," agree the rabbi and the priest.

Appreciative of the joyful sound of the shofar, the traditional blowing of a ram's horn, to ring in Rosh Hashana, Keehan says Holy Family has sounded a shofar to celebrate the Holy Week that culminates in Easter.

While the union between Holy Family and Beth Tikvah is unusual, the merging of the best of Jewish and Christian traditions isn't unique. The priest points out that Jesus was thought to have attended many Jewish High Holy Days during his youth.

"The Last Supper," Keehan notes, "was a Passover meal." 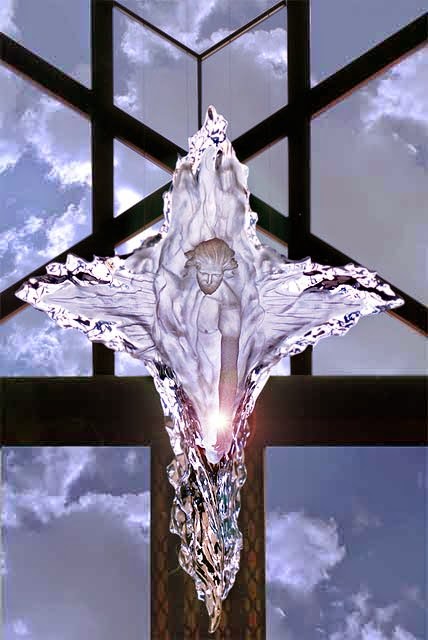 Above is the Cross of New Life by Ernest Caballero which isn't a crucifix but is still offensive to the Talmudic Jews. It appears to be a bird's eye view of a person swimming backstroke laps in a pool. 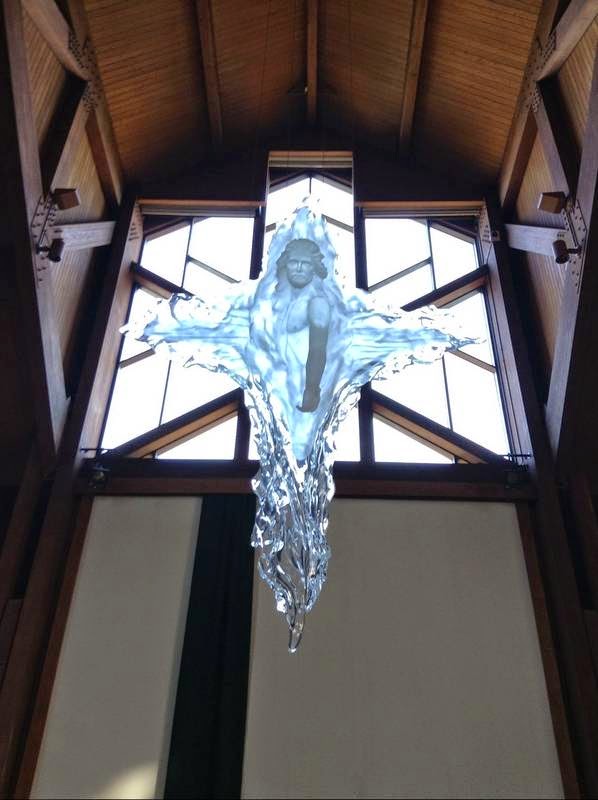 Looking up at the artwork.  Is that a church or a masonic temple?
It matters not as it is soon to be a synagogue! 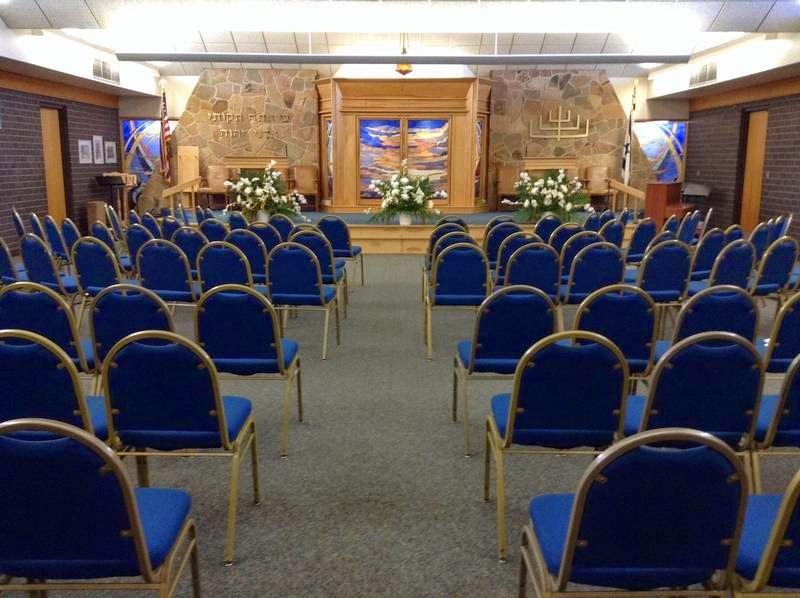 The Beth Tikvah congregation of Hoffman Estates it too small to host the throngs of Talmudic Jews wanting to say their 'Kol Nidre' prayer.  Instead they move its High Holy Days services to the nearby Holy Family Catholic Church in Inverness as part of a special arrangement which is now celebrating its 10th year! 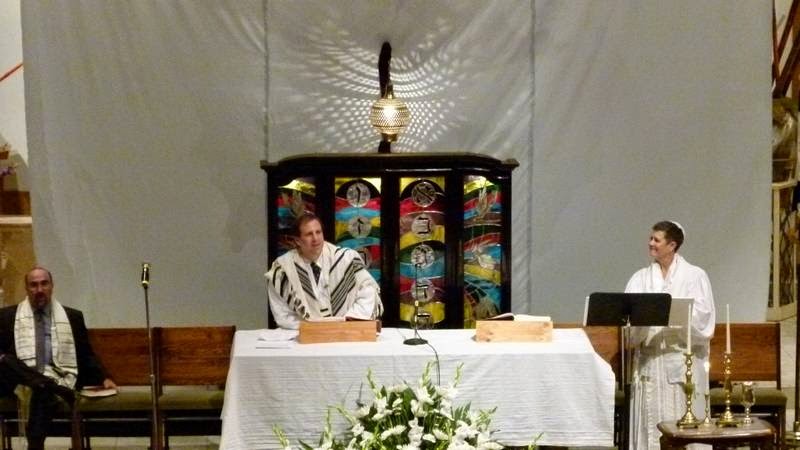