On the miracle of the loaves and fishes


Here is what "Catholic scholar" (Voris' words, not ours) Francis has to say about the miracle of the loaves and fish.  This is not by any means an exhaustive search of what Francis has said on the Miracle of the Multiplication of the Loaves and Fish, nor are the quotes cherry-picked to make him look bad.  Francis really believes what he says.  The underlines are ours for emphasis.  Click on the blue headings to read all of Francis' words in their original context.

...In the Gospel we have listened to, Jesus says something that I always find striking: “you give them something to eat” (Lk 9:13). Starting with this sentence I am letting myself be guided by three words; following [sequela], communion, sharing.

...A final element: where does the multiplication of the loaves come from? The answer lies in Jesus’ request to the disciples: “You give them…”, “to give”, to share. What do the disciples share? The little they have: five loaves and two fish. However it is those very loaves and fish in the Lord's hands that feed the entire crowd. And it is the disciples themselves, bewildered as they face the insufficiency of their means, the poverty of what they are able to make available, who get the people to sit down and who — trusting in Jesus’ words — distribute the loaves and fish that satisfy the crowd. And this tells us that in the Church, but also in society, a key word of which we must not be frightened is “solidarity”, that is, the ability to make what we have, our humble capacities, available to God, for only in sharing, in giving, will our life be fruitful. Solidarity is a word seen badly by the spirit of the world!

...Jesus’ outlook is very different; it is dictated by his union with the Father and his compassion for the people, that mercifulness of Jesus for us all. Jesus senses our problems, he senses our weaknesses, he senses our needs. Looking at those five loaves, Jesus thinks: this is Providence! From this small amount, God can make it suffice for everyone. Jesus trusts in the heavenly Father without reserve; he knows that for him everything is possible. Thus he tells his disciples to have the people sit down in groups of 50 — this is not merely coincidental, for it means that they are no longer a crowd but become communities nourished by God’s bread. Jesus then takes those loaves and fish, looks up to heaven, recites the blessing — the reference to the Eucharist is clear — and breaks them and gives them to the disciples who distribute them... and the loaves and fish do not run out, they do not run out! This is the miracle: rather than a multiplication it is a sharing, inspired by faith and prayer. Everyone eats and some is left over: it is the sign of Jesus, the Bread of God for humanity.

...A few days ago, on the Feast of Corpus Christi, we read the account of the miracle of the multiplication of the loaves. Jesus fed the multitude with five loaves and two fish. And the end of this passage is important: “and all ate and were satisfied. And they took up what was left over, twelve baskets of broken pieces (Lk 9:17). Jesus asked the disciples to ensure that nothing was wasted: nothing thrown out! And there is this fact of 12 baskets: why 12? What does it mean? Twelve is the number of the tribes of Israel, it represents symbolically the whole people. And this tells us that when the food was shared fairly, with solidarity, no one was deprived of what he needed, every community could meet the needs of its poorest members. Human and environmental ecology go hand in hand.

...I would like to encourage the efforts that Brazilian society is making to integrate all its members, including those who suffer most and are in greatest need, through the fight against hunger and deprivation. No amount of “peace-building” will be able to last, nor will harmony and happiness be attained in a society that ignores, pushes to the margins or excludes a part of itself. A society of that kind simply impoverishes itself, it loses something essential. We must never, never allow the throwaway culture to enter our hearts! We must never allow the throwaway culture to enter our hearts, because we are brothers and sisters. No one is disposable! Let us always remember this: only when we are able to share do we become truly rich; everything that is shared is multiplied! Think of the multiplication of the loaves by Jesus! The measure of the greatness of a society is found in the way it treats those most in need, those who have nothing apart from their poverty!

VIDEOMESSAGE FOR THE CAMPAIGN AGAINST GLOBAL HUNGER LAUNCHED BY CARITAS INTERNATIONALIS, 9 December 2013

...When the Apostles said to Jesus that the people who had come to listen to his words were hungry, He invited them to go and look for food. Being poor themselves, all they found were five loaves and two fish. But with the grace of God, they managed to feed a multitude of people, even managing to collect what was left over and avoiding that it went to waste.
We are in front of a global scandal of around one billion – one billion people who still suffer from hunger today. We cannot look the other way and pretend this does not exist. The food available in the world is enough to feed everyone. The parable of the multiplication of the loaves and fish teaches us exactly this: that if there is the will, what we have never ends. On the contrary, it abounds and does not get wasted.

...The second message is sharing. The first is compassion, which Jesus felt, and the second is sharing. It’s helpful to compare the reaction of the disciples with regard to the tired and hungry people, with that of Jesus. They are different. The disciples think it would be better to send them away so they can go and buy food. Jesus instead says: “you give them something to eat”. Two different reactions, which reflect two contrasting outlooks: the disciples reason with worldly logic, by which each person must think of himself; they reason as if to say: “Sort it out for yourselves”. Jesus reasons with God’s logic, which is that of sharing. How many times we turn away so as not to see our brothers in need! And this looking away is a polite way to say, with white gloves, “Sort it out for yourselves”. And this is not Jesus’ way: this is selfishness. Had he sent away the crowds, many people would have been left with nothing to eat. Instead those few loaves and fish, shared and blessed by God, were enough for everyone. And pay heed! It isn’t magic, it’s a “sign”: a sign that calls for faith in God, provident Father, who does not let us go without “our daily bread”, if we know how to share it as brothers.

Francis has said what Voris just criticized "Protestant and Catholic scholars" for saying, the miracle of the loaves and fish was one of sharing!  Sharing is the miracle!

To recap we quote Voris from the above video,


"Almost everyone has heard that the real miracle when Jesus multiplied the loaves and fish was not an actual multiplication, but that he managed to get everyone to share their food with one another. You hear that from pulpits all the time.

That comes directly from the Protestant school of historical criticism adopted by Catholic “scholars.” What effect does it have? It makes Jesus a non-performer of miracles, which means he isn’t divine, which means the Church He established isn’t invested with supernatural authority, which means you don’t have to believe what it teaches. See the flow?"


Does this mean Michael will pull another video and skip communion on Sunday once again?  Will he confess his sin of inadvertent spiritual pornography to a priest?  Obviously, Francis is right and Voris is wrong because Voris considers it his duty to clothe the naked Noah. 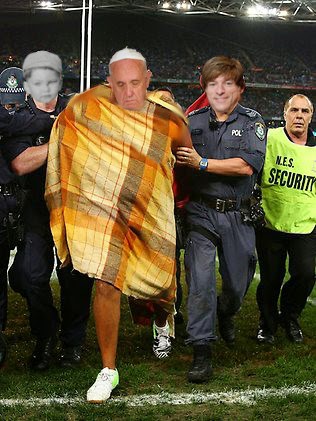 Carroll & Voris helping cover Francis
Posted by hereisjorgebergoglio at 3:33 AM