and answers her critics in an interview! 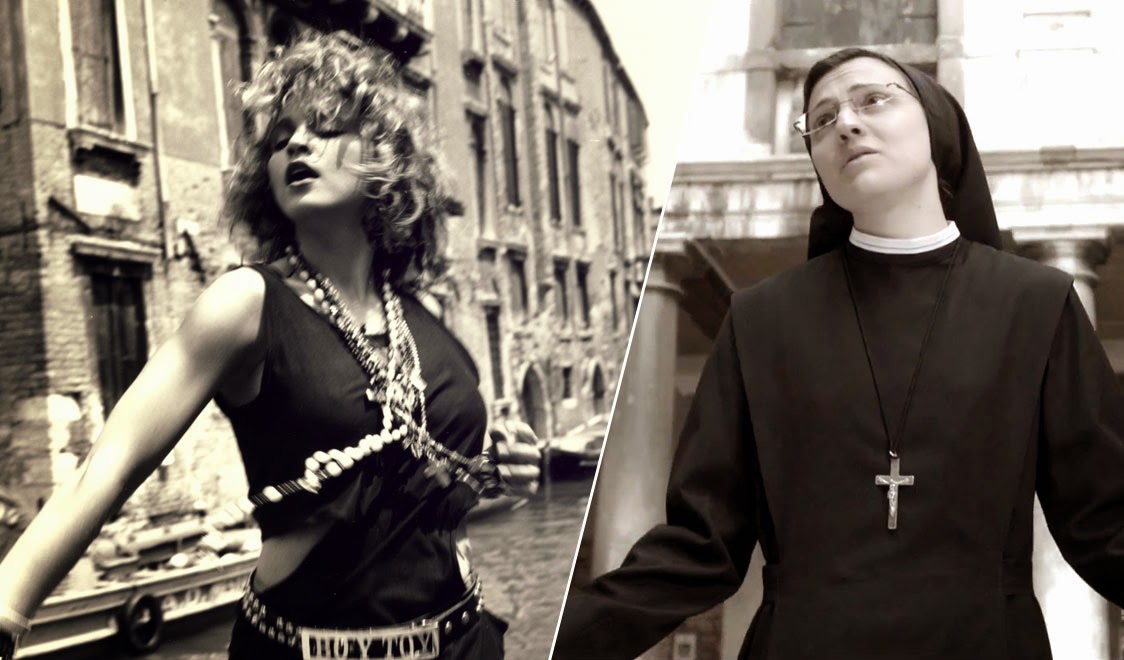 Madonna Ciccone's music video for Like A Virgin was shot in
Venice, Italy as is Suor Cristina's video.

Gonna give you all my love,
My fear is fading fast
Been saving it all for you
'Cause only love can last

Cristina explains what she loves in life & what  the driving force in her life is...


Ooops, she forgets to mention one important thing in her life, Christ!

Get ready. Turning on the radio, from today - Monday, October 20, you could be startled discovering that Sister Cristina, the winner of TV talent show The Voice , decided to sing Like a Virgin by Madonna.  As if that weren't enough, she chose it as her single - that is, as a 'business card' - of her debut album, Sister Cristina, which will be released on November 11th in the world and will contain 10 tracks revisited and reinterpreted : Try, Like A Virgin, Somewhere Only We Know, Blessed Be Your Name, Fix You, No One, I Surrender, True Colors, and Price Tag, Longe ou depois (Ordinary World) as well as two previously unreleased songs: Fallin 'Free and L’Amore Vincera.

Listening to Sister Cristina sing Like a Virgin will make one probably wonder: what came to mind? Where are you going? Doesn't she realize that it will trigger an uproar? Not to mention the irony that will sprout on the web about a nun who sings a song like that, brought to success by a pop star who has often used in a provocative manner religious symbols.

Of all this, Sister Cristina talks exclusively with Avvenire.
We meet in her "home". That is, in the Milanese community of the Ursuline Sisters of the Holy Family.  Three sisters in all, including Cristina. They run a nursery school, a boarding school for thirty universities and collaborate with neighboring parish. She does everything: she teaches catechism, she keeps up with the girls, she takes turns at the front desk, and sings at Mass on Sunday.

I'm going straight to the point.

What came to mind to sing "Like a Virgin" by Madonna?
"I chose it myself. Without any intention to provoke or shock. Reading the lyrics, without being influenced by previous (version), it turns out that it's a song about the ability of love to make people new. To redeem them from their past.  And that's how I wanted to interpret it. For this we turned the track the from pop-dance that it was, into a romantic ballad a bit like Amos Lee. That is something more akin to a secular prayer than it is a pop song. "

Put like that it seems to be talking about (Solomon's) the Song of Songs.
"From a poetic point of view the song refers to a broad tradition, which includes many important texts. However, I am ready for any criticism because for this album we worked with professionalism and honesty. "

Has the pop star Madonna heard the song?
"No, but I'd love to see her face when she does and (when they) say that it is a nun who sings."

How does it feel to know that all over the world, from Australia to the Philippines, from South America to New York, hundreds of thousands of people are expected to buy his album?
"I still have not made it. Why, it is not because of me that all this has happened.  I still do not have the idea of ​​what is going on.  I feel small in front of all of this.  I am 26 years old, (and) I am small. But I know that I have a great responsibility. What I have to give is a testimony.  And I like that. Why I'm thrilled to have met Christ and I would like anyone who has met him."

Did you ever regret having participated in the TV talent show "The Voice" which launched (you) but it has also completely changed your life, it made you a star?
"Sometimes, yes. Especially when, after winning, I felt an almost morbid curiosity on the part of the media.  Some photographers followed me everywhere. I have bent over backwards to go to Mass without being discovered."

How have you been able to withstand the pressure of the fans and media, and the criticisms that have rained down on you?
"After the victory of The Voice , I pulled the plug. I stayed here in the community. I kept silent.  And prayed a lot.  I focused on the fact that I had to renew my vows, that is, the most important thing for me: to protect my spiritual life."

Maybe it is the first time it happened, but it is not easy to get used to the idea of ​​a nun who could become a pop star world.
"No, for me is it not easy. The thing that made me and makes me keep my feet on the ground is to belong to a community that helps me and protects me.  And to know that they are a tool in the hands of God, not a pop star.  I know it's hard to believe, but if I could hide myself, I would do it gladly.  I am an insecure girl and fearful. On stage, I seem very sure, but behind the scenes I tremble like a leaf."

But then why not instead retire and stop all this, why decide to make a debut in the world, making choices inevitably destined to cause a fuss?
"Because I had a great gift: my voice. And I can not hide it, I have to yield to a greater good.  For the community.  And then my insecure side helps me - along with the sisters (of the order) - to always stay ten steps back and not let it go to my head."

But how does a gift to remain pure when it inevitably becomes all about business, money and success?
"You have to preserver every day. For this reason, I try to look at all this with detachment.  For this I pray a lot."

An album that comes out in the world, however, it also means major gains (monetary). Your order also includes a vow of poverty. Who will manage and to what end the money will come?
"For now, after The Voice , it is not there. If and when it arrives, I will have no doubt we will use the money to subsidize projects of benefit to the congregation. For our home in Brazil, but also for a project in my Sicily, where there is plenty of poverty.  I would love to help other associations.  In any case, any choice, I will make with the whole congregation."

I wonder if this will be enough to change the mind of those who critique you because a nun should not be in show (business) on TV.
"The best answer for those who think that is not me, but is Pope Francis. The Church, as he shows it is alive.  We must go out, to meet people.  And then everyone has to put at the service of the community their talents.  At the risk of going against the current."

Have you ever met or heard, maybe on the phone, from Pope Francis?
"No, but I can not wait to meet him.  I wish he would give me his blessing and a sort of official "mandate" to go into the whole world to sing."

You taught catechism in the parish. How do the eyes of children to stay (focused) on, pass me (help me with) the term, a nun "real" and not Sister Christina of "The Voice"?
"It's difficult. It weighs on me that so many see me as "that famous (nun)."  It weighs on me but I know that, thanks to my presence on television, there are also passed on important concepts.  Like when I recited the Our Father in front of everyone."

The year 2015 will be a year dedicated to the consecrated life. Do you feel it is an important tool to reveal its beauty or its reputation could paradoxically become so cumbersome as to become a sort of stumbling?
"I feel a humble instrument. Who hopes to be able to be useful to the Church in such an important year for the consecrated life.  I have already made a proposal to participate in an event at the Vatican.  If they deem it useful, I will be happy to give my contribution."

Excuse me if I insist. But who made you do "Like a Virgin"?  Was this forced by the record company?
"No. I was free in the choices I have made. Of course, as in all partnerships, we come to an agreement. But this song I decided on.  And I'm glad to be playing as both the video clips that we shot in Venice (as did the pop star Madonna in her Like a Virgin - Ed.)  We wanted to convey serenity and poetry.  I believe that we have succeeded."

But I am afraid that the first reactions to your "Like a Virgin" will not be all marked with serenity. To tell you the truth: I do not envy you.  And it's just ...
"I know what's going to be said, and it is only the beginning. But I am calm and will remain serene." 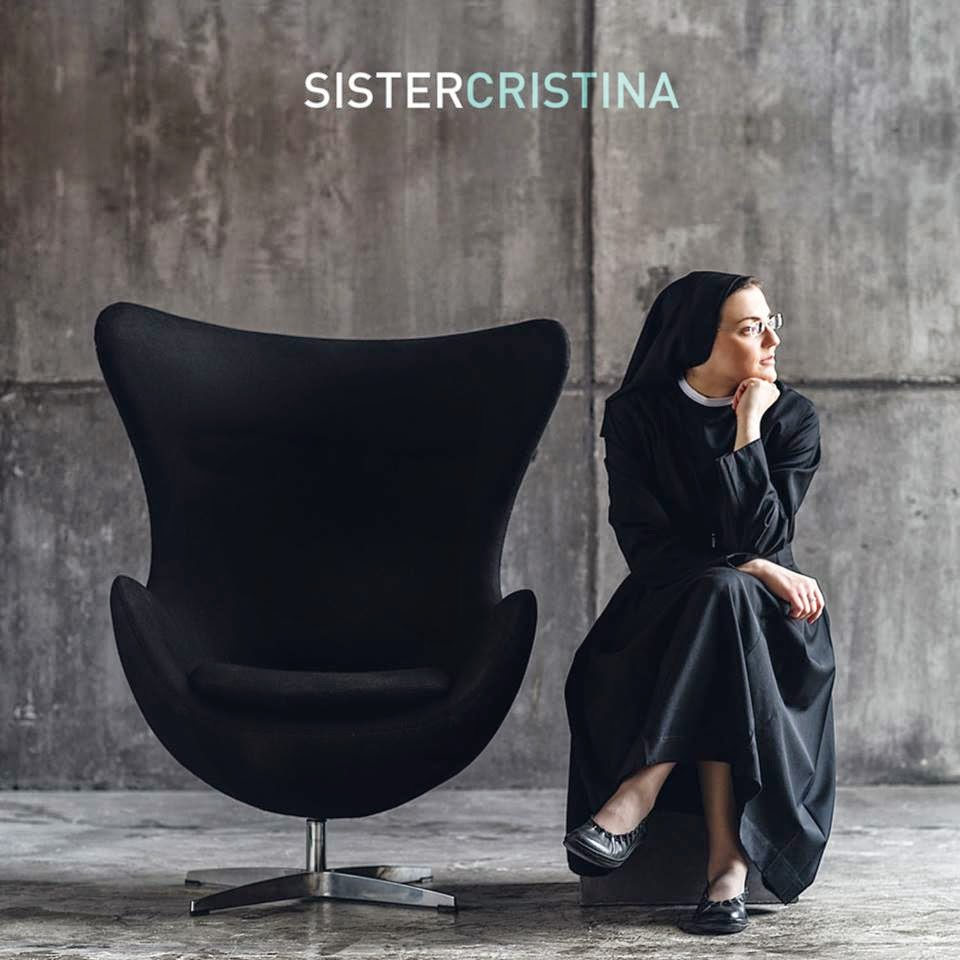 What's Cristina going to sing on her next album?

Led Zepplin's Stairway to Heaven?
Posted by hereisjorgebergoglio at 2:39 AM