the circus at the Vatican 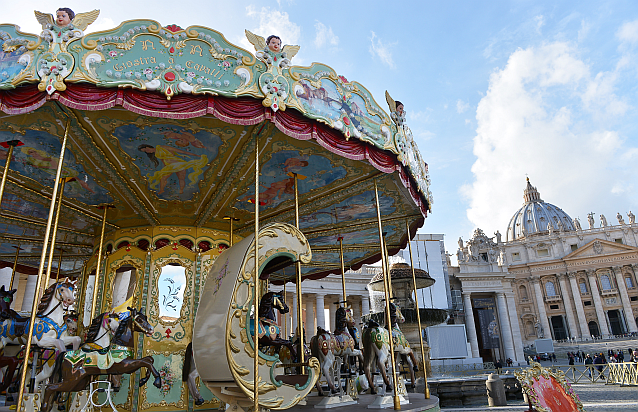 We have to disagree with the kosher approved super-reporter extraordinaire, John Allen, even if it is only in a matter of degrees.  The Synod isn't like a soap opera but is a circus just like the Novus Ordo church.  Which tent do you want to be a part of?


ROME – Every day, the 2014 Synod of Bishops on the family, a summit of 260 bishops and other participants convened by Pope Francis, seems more and more like a daytime soap opera. Today brought more surprising turns on multiple fronts.

For one thing, the bishops made the unprecedented decision to release internal reports of small group discussions about a working document released Monday that became a sensation due to its positive language about same-sex unions, couples who live together outside of marriage, and others in “irregular” situations.

The reports photograph a vigorous debate within a divided synod, with one camp seemingly embracing a more positive vision of situations that fall outside the boundaries of official Catholic doctrine, and another clearly alarmed about going soft.

Austrian Cardinal Christoph Schönborn, one of the leaders of the moderate camp, today compared the situation in the synod in which a mother says “watch out, be careful,” and the father says “no, that’s fine, go ahead.”

In part, the decision to release the reports was probably a response to accusations that a policy of not providing individual speeches bishops had given earlier in the synod was intended to suppress conservatives who don’t support the line believed to be favored by Pope Francis.

Also today, the Vatican released a slightly modified English translation of the report from Monday which softened its language on gays; for instance, changing “welcoming” homosexuals to “providing for” them, and saying their unions can provide “valuable support” for partners rather than “precious support.”

Paradoxically, however, the Vatican also insisted that the Italian version is the definitive one, where the word accoglienza, meaning “welcome,” remains.

On a different front, Metropolitan Hilarion of the Russian Orthodox Church used his speech in the synod today to take a shot at the Greek Catholic Church in Ukraine, basically telling them to stop complaining about Russian foreign policy and the support for Russian incursions in Ukraine voiced by Russian Orthodox leaders.

Cardinal Timothy Dolan of New York was sufficiently outraged that be grabbed Archbishop Sviatoslav Shevchuk, head of the Greek Catholic Church, who was also in the synod hall, and immediately taped a segment for his radio show in New York to object to Hilarion’s rhetoric.

Outside the synod, things were no less interesting.

In an interview with Rome-based journalist Edwin Pentin, Cardinal Walter Kasper, renowned as the champion of the permissive camp on the question of allowing divorced and remarried Catholics to take Communion, said that African bishops at the synod “should not tell us too much what we have to do.”

Kasper later disassociated himself from the comments.

The emergence of the Africans has been one of the more intriguing bits of subtext to the 2014 synod. The fact that they tend to be conservative on matters of sexual morality, especially gay relationships, is no surprise; what has raised eyebrows has been the forceful way they’ve been inserting themselves into the conversation.

After Pope Francis named a six-member editorial committee to shape the synod’s final document, for instance, Africans objected that he hadn’t included anyone from the continent. (Naturally, conspiracy theorists saw this as part of the plot to muzzle the conservative voice.)

Today the Vatican announced that the pope had added Cardinal Wilfrid Fox Napier of South Africa to the group, along with Archbishop Denis Hart of Melbourne, Australia. Two days ago, Napier told a Vatican briefing that it “is not true” the entire synod stood behind the message delivered in Monday’s document.

One cardinal speaking on background today said that the Second Vatican Council in the mid-1960s, the Africans weren’t much involved in the discussion. Now, he said, they’ve come of age and are making sure their voice is heard.

In other words, the fault lines at the 2014 synod don’t just run left/right, but also north/south.

Each one of these twists probably deserves its own commentary, but for now here are three general observations.

First, tune in Saturday evening to see what happens with the final document the bishops are slated to vote on, paragraph by paragraph.

Given the divisions that have surfaced — which Francesco Miano, one of the laity in the synod, today phrased as a tension between truth and mercy — it’s virtually certain that some of the daring language from Monday’s interim report will be tweaked, more citations of Church teaching will be inserted, and a stronger focus on sin and the negative elements of certain relationships will emerge.

The drama is whether after all of that is done, the basic message of outreach and — even though the term has been redacted in English — welcome expressed in Monday’s document will still be there.

A cardinal put the question this way today: “Is the synod going to end up being more hesitant than the pope?”

Two, on the keenly debated issue of Communion for the divorced and remarried, it’s abundantly clear that there is no consensus one way or the other, and so the final document seems likely to call for further study rather than making a verdict.

Even that, however, would arguably mark a breakthrough of sorts for the reform position, given that the concluding document of the last synod specifically devoted to the family, in 1980, confirmed the existing rule “founded on Sacred Scripture, of not admitting the divorced and remarried to Holy Communion.”

That document was titled Familiaris Consortio, and was issued by Pope John Paul II. It was confirmed again in a letter from the Vatican’s doctrinal office in 1994, signed by the future Pope Benedict XVI.

Third, it will be fascinating to watch what bishops do over the next year, in the run-up to the larger Synod of Bishops on the family called by Pope Francis for October 2015.

Some will undoubtedly use the synod’s final document as a basis for open debate on the issues raised, without any pre-determined idea of how they should be resolved. Others, however, may well use the following 12 months to marshal their forces to bolster the positions they support, much as happened during the periods between sessions of Vatican II.

Next year, coincidentally, will mark the 50th anniversary of the closing of Vatican II in 1965. In many ways, the experience of this synod and what’s likely to happen from here is as close as the Church has come in the period sense to living some of the same drama.

Whether that’s a welcome development or something to rue, of course, depends on one’s point of view.

The Circus Show never ends with Francis!
Posted by hereisjorgebergoglio at 2:25 PM