Where Francis gets his ideas 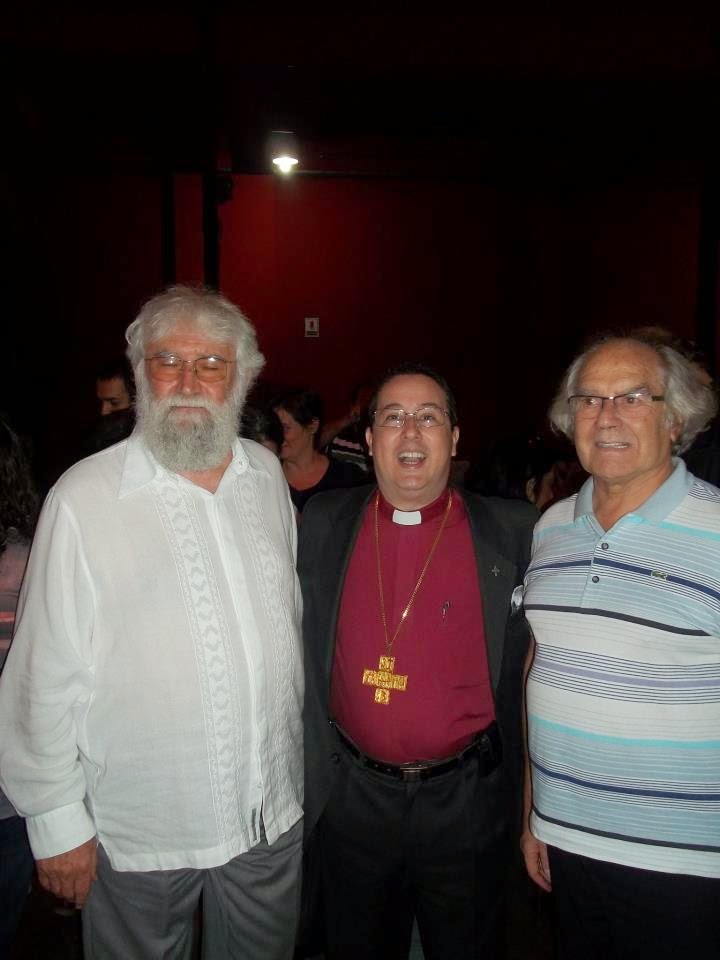 One of the people Francis gets his ideas from is Leonardo Boff the catholic priest, professor, and theologian.  Strange as this sounds it is true.  Francis and Boff are not only admirers of each other but also confidants.

Boff was the first one to notify the non-Argentinian press that a change was in the winds concerning catholic doctrine.  Leonardo Boff stated in an interview that Jorge Cardinal Bergoglio helped homosexuals adopt children:

For example, a few months ago he explicitly permitted a homosexual couple to adopt a child. He kept in touch with priests who were expelled from the official church because they had gotten married. And no one could ever persuade him to change his position, which was: we have to be on the side of the poor, even if it means opposing the powerful.


Recall Francis' first trip abroad as the pontiff for World Youth Day Rio 2013 to Brazil, the homeland of Leonardo Boff?  Here is what Juan Arias of El Pais wrote about it:

On arriving in Brazil, the Pope asked for a copy of the recently published book by "rebel" theologian Leonardo Boff titled Francisco de Assis e Francisco de Roma (Francis of Asissi and Francis of Rome), where he analyzes the breakthrough this Pope is bringing to the Church with a return to the origins of Christianity.

...However, Boff confided the following: "A friend of the Pope's from when he was Archbishop of Buenos Aires, with whom Francis talks on the phone every week, told me she asked the Pope if he intended to receive me and his answer was 'I want to do it, but only after I've finished the reform of the Curia.'"

...Boff told me that Pope Francis has accepted the most primitive concept of liberation theology in his program. "Remember, Juan, that theologian Carlos Scanone, who launched that theology in Argentina, was a professor of Bergoglio, the future pope, when he was teaching theology in a school on the outskirts of Buenos Aires."

Boff pointed out that Scanone developed a liberation theology that was tied to "populist theology", different in some ways from the one that was developed later by the current that was inspired by the theory of Marxism which claims to rescue the poor and excluded through changing political structures. According to Scanone's theology, it's the people who must carry out their own liberation from the power structures that enslave them.

"In that sense, we could say that Francis is a liberation theologian along the lines developed by Scanone, which was the one that in some ways supported some of the attitudes of Peronism," Boff added.


This isn't the only interview Boff has given where he has explained his relationship with Francis and how they are in communication.  From La Stampa's Vatican Insider, (quote in Italian) or (quote in Spanish):

You talk with the Pope? In what way?

"We have a mutual friend in Argentina. They talk every Sunday, they talk often. I send a few things to her and he (Francis) asks me others."


So what ideas has Boff been sharing with Francis recently?  Well dear reader you are in luck as Leonardo has a blog where he shares his thoughts.  This one has to be read to be believed as it is so heretical.  Boff's construct of the Holy Ghost being female appears to come from rabbincal Judaism's Shekinah and Hermaphrodite god.  After reading the blog entry below, one can safely say these ideas are most certainly not coming from God.

The Feminine Side of God by Leonardo Boff
18 September 2014

Early one sleepless morning, I returned to my usual work on the computer. Suddenly, it seemed that I heard something. I do not know if it came from the celestial world or from my mind in an altered state, but a voice, like a whisper, told me: “Son, I will reveal to you a truth that has always been there, in my Gospel writer Luke, but that the eyes of men, blinded by centuries of patriarchy, could not see. It is about the intimate and ineffable relationship between Mary and the Holy Ghost”.

And the voice continued whispering: “The one who is third in the order of the Trinity, the Holy Ghost, is the first in the order of creation. He came first to the world; then came the Son of God. It was the Holy Ghost who soared over the primitive chaos, and took from there all the orders of creation. As is said by my Gospel writer Luke recounts, that Spirit creator told Mary: He will come to you, Mary, and will set up his tent over you. This is why the engendered Saint will be called Son of God. To set up the tent, as you know, means to dwell, to inhabit definitively. If Mary, perplexed, had not said her fiat, let it be done according to Your word, the Son would not have been incarnated and the Holy Ghost would have not been feminized.

Listen, son, to what I am telling you: The Spirit came to dwell definitively over this woman, Mary. He identified with her, united Himself with her in such a radical and mysterious form that within her began to take shape the holy humanity of Jesus. The Spirit of life produced the new life, the new man, Jesus. To you and to all the faithful it is clear that the masculine was made divine through the man, Jesus of Nazareth. Now go to the Gospel of Saint Luke, and you will see that through Mary of Nazareth, the feminine was made divine as well, by the Holy Ghost. The Holy Ghost set up His tent, this is, He came to definitively dwell in her. Note that John, the Gospel writer, says the same about the Son: He set His tent in Jesus. Is it not the Spirit, the same voice whispers, that takes the prophet on a predetermined mission, and, when that mission is fulfilled, His presence within him ends? With Mary, it is different. He comes, dwells, and never leaves. She is elevated to the loftiness of the Divine Holy Spirit. Hence, logically, the engendered Saint will be called Son of God. Such is the case of Mary. Not without reason is she blessed among women.

Son, this is the truth you must proclaim: though Mary, God was revealed as both God-the-Father and God-the-Mother, also with the characteristics of the feminine: love, tenderness, caring, compassion and mercy. These virtues also are present in men, but they find a more visible expression in women.

Son, when you say God-the-Mother you will discover the feminine side of God, with all the feminine virtues. Never forget that no woman ever betrayed Jesus. They were faithful to Him even at the foot of the cross. While His disciples, the men, fled – Judas betrayed and Peter denied Him – but the women expressed a faithful love to the extreme. The women, well before the apostles, were the first to give testimony of the resurrection of Jesus, the greatest event in the history of salvation.

Maternity does not exhaust the feminine side of God, which is also revealed wherever there is intimacy, lovingness, gentleness and sensibility, which are perceptible in the feminine. Never let anyone, for any reason, discriminate against a woman for being a woman. Offer all the reasons that she must be respected and loved, because she reveals something of God that only she, together with man, can create, in My image and likeness. Support her struggles, gather her contributions to society, to the Churches, to the equilibrium between men and women. Women are a sacrament of God-the-Mother of all, the path leading us to the tenderness of God. Let’s hope that women embrace their divine side, found in one of their compañeras, Mary of Nazareth. The day will come when the blinders that cover your eyes will fall and then men and women will feel that they are made divine by the Son and by the Holy Spirit.”

When I came to, I knew with a clear mind just how much truth had been communicated to me. And, moved, I was filled with praise and thanksgiving.

Free translation from the Spanish sent by
Melina Alfaro, alfaro_melina@yahoo.com.ar, 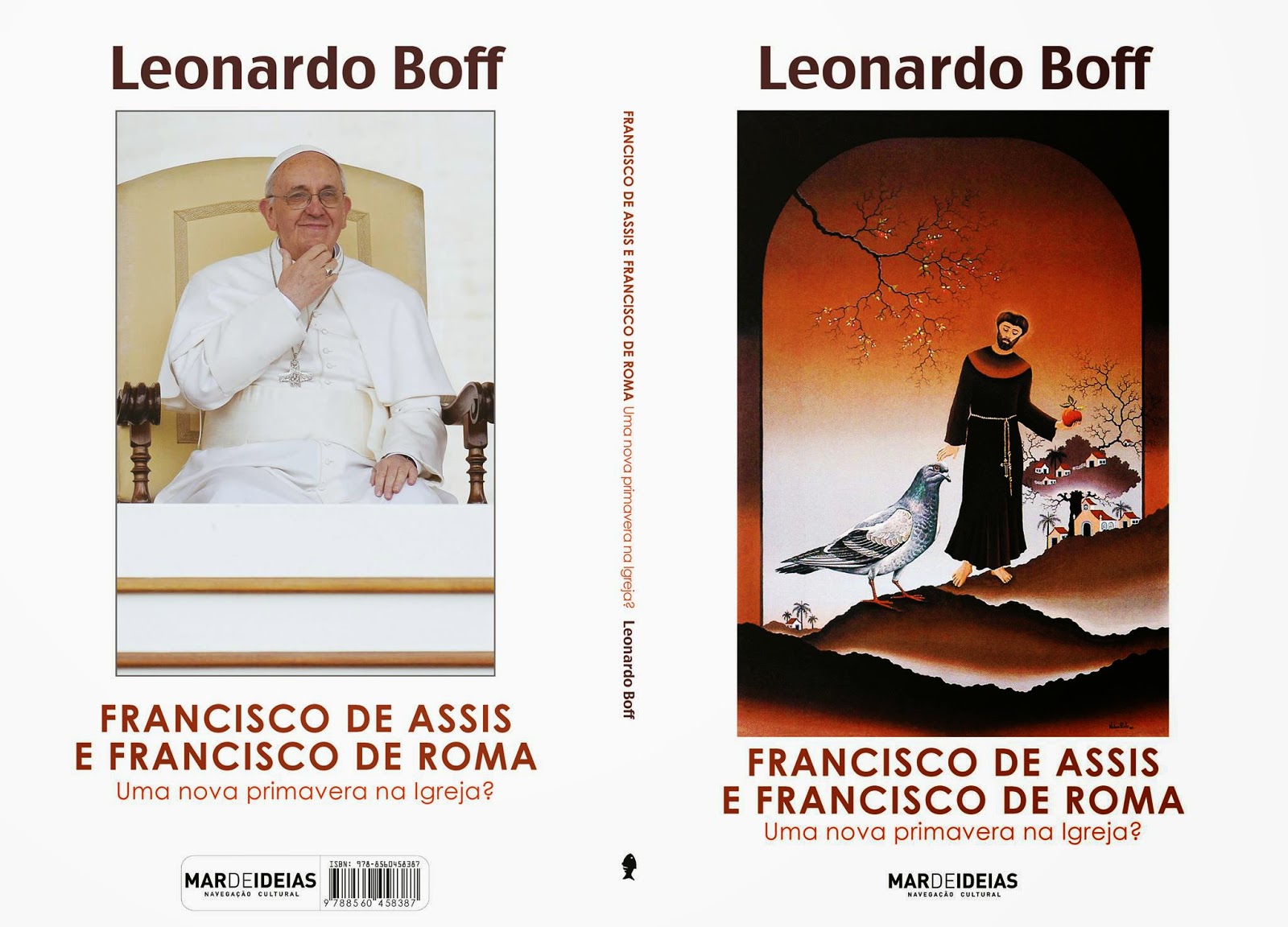 left to right: back cover & front cover of Boff's book, Francis
of Asissi and Francis of Rome, which Francis requested
Posted by hereisjorgebergoglio at 1:20 AM