Straight from the horse's mouth...

(Our apologies to horses, we mean no offense.) 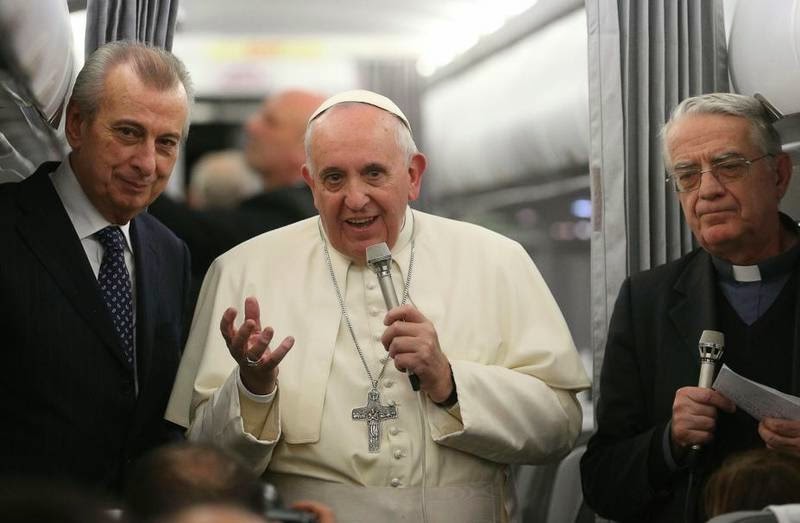 Francis' latest off-the-cuff interview was on the recent airplane ride back to Rome from Istanbul, Turkey.  Some of the bombshells Francis said:

Transcribed by Vatican Insider's Andrea Tornielli in the article, “In the mosque I prayed to the Lord for these wars to stop!”  Underlines in the Q & A are ours for emphasis.

“It is true that there has been a reaction to these terrorist acts not just in this region but in Africa as well. “If this is Islam it makes me angry!” So many Muslims feel offended, they say: “But that is not what we are, the Quran is a prophetic book of peace, this (terrorism) is not  Islamism. I can understand this. And I sincerely believe that we cannot say all Muslims are terrorists, just as we cannot say that all Christians are fundamentalists – we also have fundamentalists among us, all religions have these little groups. I told President Erdogan that it would be good to issue a clear condemnation against these kinds of groups. All religious leaders, scholars, clerics, intellectuals and politicians should do this. This way they would hear it from their leader’s mouth. There needs to be an international condemnation from Muslims across the world. It needs to say, “no, this is not what the Quran is about!”. There should also always be a distinction between what a religion proposes and the concrete use of that proposal by a concrete government. The way you govern your country may not be Islamic or Jewish or Christian. The name is often used but the reality does not reflect what the religion says.”

“I’m going to speak frankly: (we) Christians are being chased from the Middle East. In some cases, as we have seen in Iraq, in the Mosul area, they have to leave or pay a tax that may be unnecessary. Sometimes they chase us away kindly.”

“I had what was probably the most wonderful conversation regarding this with the president for Religious Affairs and his team. When the new Turkish ambassador to the Holy See came to deliver his letters of credence, I saw an exceptional man before me, a man of profound piousness. They said: Now it seems like interreligious dialogue has come to an end.” We need to raise the bar. We need to bring about a dialogue between religious figures of different faiths and this is a beautiful thing: men and women who meet other men and women and share experiences: it’s not theology we are talking about but experience.”

Prayer in the Mosque

“I went to Turkey as a pilgrim, not as a tourist. And I went especially for today’s feast celebrated by Patriarch Bartholomew . When I entered the mosque, I could not say: now I’m a tourist! I saw that marvellous place; the Mufti explained things very well to me, showing great meekness; he quoted the Quran when he spoke about Mary and John the Baptist. At that moment I felt the need to pray. So I asked him: Shall we pray a little? To which he responded: “Yes, yes”. I prayed for Turkey, for peace, for the Mufti, for everyone and for myself ... I said: Lord, let’s put an end to these wars! It was a moment of sincere prayer.”

“Last month, the Metropolitan Hilarion attended the Synod as a delegate and he spoke to me not as a Synod delegate but as the President of the commission for Orthodox-Catholic dialogue. We spoke for a while. I believe we are moving forward in our relations with Orthodoxy, they have the sacraments and apostolic succession, we are moving forward.  If we wait for theologians to reach an agreement, that day will never come! I am sceptical: theologians work well but Athenagoras said: “Let us put theologians on an island to discuss among themselves and we’ll just get on with things!” Unity is a journey we need to go on together, it is spiritual ecumenism, praying together, working together. Then there is ecumenism of the blood: when they kill Christians, bloods mix. Our martyrs are crying out: we are one. This is what ecumenism of the blood is. We must follow this path courageously and carry on moving forward. Perhaps some are not able to understand this. The Eastern catholic Churches have a right to exist, but uniatism is a dated word, another solution needs to be found.”

I want to meet the Patriarch of Moscow

“I told Patriarch Kiril, we can meet wherever you want, you call me and I’ll come. But he has a lot on his plate at the moment  what with the war in Ukraine. Both of us want to meet and move forward. Hilarion suggested the commission hold a study meeting on the primacy issue. We have to continue along the footsteps of John Paul II: help me to find a solution to the primacy issue that is also acceptable to the Orthodox Churches.”

The origin of divisions between Churches

“The thing I feel most deeply about on this path toward unity, I mentioned in yesterday’s homily on the Holy Spirit: the path of the Holy Spirit is the only right path, he is full of surprises, he is creative. The problem – and I as I said in the general congregations before the Conclave this may be self-criticism  – is that the Church has the bad and sinful habit of being too inward-looking, as if it believes it shines of its own light. The Church does not have its own light, it needs to look at Jesus christ. Divisions exist because the Church has been focusing on itself too much. At table today, Bartholomew and I were talking about the moment when a cardinal went to communicate the Pope’s excommunication to the Patriarch: the Church was focusing on itself too much at that moment. When one focuses on oneself, one becomes self-referential.”

Primacy in the Church

“The Orthodox accept the primacy: in today’s litanies they prayed for their pastor and primate, “he who leads the way”. They said this in my presence today. We have to look back at the first millennium to find an acceptable solution. I am not saying the Church did everything wrong (in the second millennium), no, no! It paved its historic path. But now the way forward is to follow John Paul II’s request.

On the ultraconservatives who look suspiciously at open approaches

“Allow me to say that this problem is not only ours. This is also a problem they face, the Orthodox, some monks and some monasteries. For example, ever since the days when the Blessed Paul VI was Pope, there has been an ongoing discussion regarding the date of Easter and we still haven’t reached an agreement. At this rate, our great grandchildren risk celebrating it in August. The Blessed Paul VI had suggested a set date, a Sunday in April. Bartholomew was courageous: in Finland, where there is a small Orthodox community, he said they could celebrate on the same day as the Lutherans. Once, I was in Via della Scrofa, Easter preparations were underway and I heard a member of the Eastern Church say: my Christ will rise from the dead in a month’s time. My Christ, your Christ. Problems do exist. But we must be respectful and not tire of engaging in dialogue, without insulting others, without dirtying ourselves, without gossiping. If someone does not want dialogue, well ... But, patience, meekness and dialogue.”

I want to go to Iraq

“I wanted to go to a refugee camp, but it would have meant staying one more day and it was not possible for many reasons, not just personal. So I asked to meet the young refugees that are being looked after by the Salesians. I would like to take the opportunity to thank the Turkish government for its generosity. It is generous with refugees. Do you know what it takes to have to provide healthcare, food, a bed and a home for one million refugees? I do want to go to Iraq. I have spoken with Patriarch Sako. For now, it is not possible. If I went right now, it would be a problem for the authorities, for security.”

I did not discuss the EU with Erdogan

“No, we didn’t talk about that. It’s strange, we talked about so many things but not that.”

“I am convinced that we are experiencing a fragmented third world war, a war in chapters, everywhere. There are rivalries, political problems and economic problems behind this, to save this system where the god called money is at the centre instead of the human person. There are also commercial interests behind this: arms trafficking is terrible; it is one of the most powerful businesses right now.  In September last year, there was talk of Syria possessing chemical weapons: I do not believe Syria is in a position to produce chemical weapons. Who sold them these? Some of those who accused them of having them in the first place perhaps? There is a great mystery surrounding this weapons business. Humanity has not learnt its lesson on nuclear power. God gave us creation so that we could create culture out of this lack of culture. Humans did this and discovered nuclear energy which has many positive uses but they also used it to destroy humanity. This lack of culture manifests itself in another way too: I don’t want to talk about the end of the world, but it is  a culture which I call “terminal” culture; then you have to start from scratch again, just as the cities of Nagasaki and Hiroshima did.”

“On the anniversary of the genocide, when Erdogan was till Turkey’s prime minister, the Turkish government made a gesture which some considered too weak. But he was reaching out and this is always positive. Regardless of whether I hold my hand out a little or a lot, this is always a positive thing. The Turkish-Armenian border is an issue that is very close to my heart: it would be wonderful if that border could be opened! I know there are geopolitical problems that don’t help things much, but we must pray for this reconciliation among peoples. Many events have been scheduled for next year to commemorate the Armenian genocide, let us hope that the path of little gestures will be followed; small steps toward rapprochement.

“The Synod is a path, it is a journey. It is not a Parliament, it is a protected space in which the Holy Spirit may speak. The final report will not mark the end of the journey either. For this reason, we cannot just take the opinion of one person or one draft document. Personally, I disagree with someone publicly saying this person said this. Only what was actually said should be made public, and this is what happened: the Synod is not a Parliament. There is a need for protection in order for the Holy Spirit to speak.” 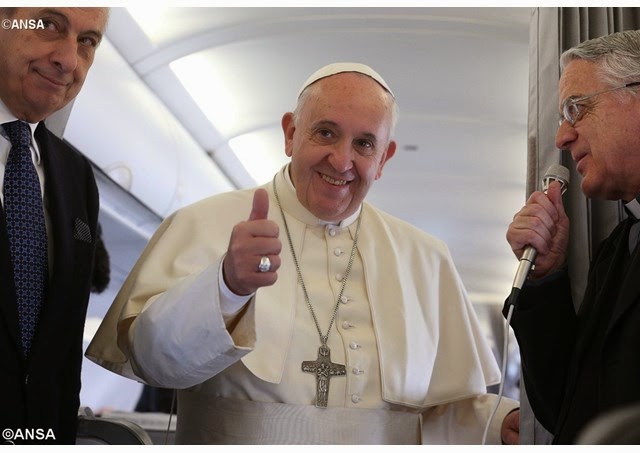 Posted by hereisjorgebergoglio at 10:54 AM