Francis' Hasidic concept of the god of surprises 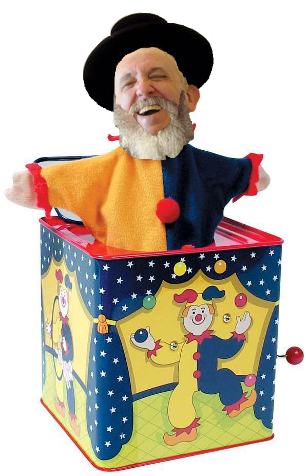 Recently, we have posted, Reading Francis through Heschel, and re-posted an entry from Maurice Pinay, Pharisee Pope Francis teaches for doctrine the contrivances of the rabbis, which show Francis' ideas come straight out of the Hasidic branch of Talmudic Judaism.

Francis met with young people during his recent trip to Manila.  In his remarks to them, he touched upon one of his favorite themes which was that 'God is a God of surprise'.

"Real love is about loving and letting yourself be loved. It’s harder to let yourself be loved than to love. That is why it is so difficult to come to the perfect love of God. We can love Him but we must let ourselves be loved by Him. Real love is being open to the love that comes to you. The love that surprises us. If you only have information you are not surprised. Love surprises because it opens a dialogue of loving and being loved. God is a God of surprise because He loved us first. God awaits us to surprise us. Let us allow ourselves to be surprised by God. Let us not have a computer psychology that makes us think we know it all. All answers on computers - but no surprises. The challenge of love. God reveals himself through surprises.

Think of St Matthew. He was a good banker. But he let people down because he imposed taxes against his own people to give to the Romans. He was full of money. Jesus passed by, looked at him and said: “Follow me”. He couldn’t believe it. It you have the opportunity, see Caravaggio’s picture of him. Jesus calls him and those around say: “Him? He betrayed us! He is no good! He hoards money!” But the surprise of being loved overcomes him. The day when Matthew left home for work, saying goodbye to his wife, he couldn’t imagine he would come home without money and have to prepare a feast for the one who loved him first. God surprised Matthew more than the money he had. Allow yourselves to be surprised by God. Don’t be afraid of surprises. They shake the ground beneath our feet and make us insecure, but they move us forward in the right direction."


The first time we became aware of this idea which Francis encourages was in his closing address to the Synod on the Family.

One, a temptation to hostile inflexibility, that is, wanting to close oneself within the written word, (the letter) and not allowing oneself to be surprised by God, by the God of surprises, (the spirit); within the law, within the certitude of what we know and not of what we still need to learn and to achieve. From the time of Christ, it is the temptation of the zealous, of the scrupulous, of the solicitous and of the so-called – today – “traditionalists” and also of the intellectuals.

"From sterility, the Lord is able to restart a new lineage, a new life. And that is the message of today. When humanity is exhausted and can no longer go forward, grace comes, the Son comes and Salvation comes. And that exhausted Creation gives way to a new creation.”

"This too makes me think of our mother Church and of so much sterility within our Mother Church: when because of the weight of the hope in the Commandments, that pelagianism that all of us carry within our bones, she becomes sterile. She believes she is capable of giving birth… no, she can’t! The Church is a mother and only becomes a mother when she opens to the newness of God, to the strength of the Spirit. When she says to herself: "I do everything, but I’ve finished, I can’t go forward!”, the Spirit comes.”

"And today is also a day to pray for our Mother Church, because of so much sterility within the people of God. A sterility arising from egoism, from power … when the Church believes she can do everything, that she can take charge of the consciences of the people, walk along the road of the Pharisees, of the Sadducees, along the road of hypocrisy, yes, the Church is sterile. Let’s pray. That this Christmas our Church may be open to the gift of God, that she may allow herself to be surprised by the Holy Spirit and be a Church that gives birth, a mother Church. Many times I think that in some places the Church is more like an entrepreneur than a mother.”

The Child and the Thief

In the book, Hasidic Tales: Annotated & Explained, by Rabbi Rami Shapiro, there is the story of a rabbi who wants to obtain enlightenment concerning the Ten Principles of Divine Service, so he visits his rabbi for advice.  His rabbi tell him that he can learn the first three principles from a child and the last seven from a thief.  Rabbi Shapiro in his notes to this tale explains some of the qualities of God. 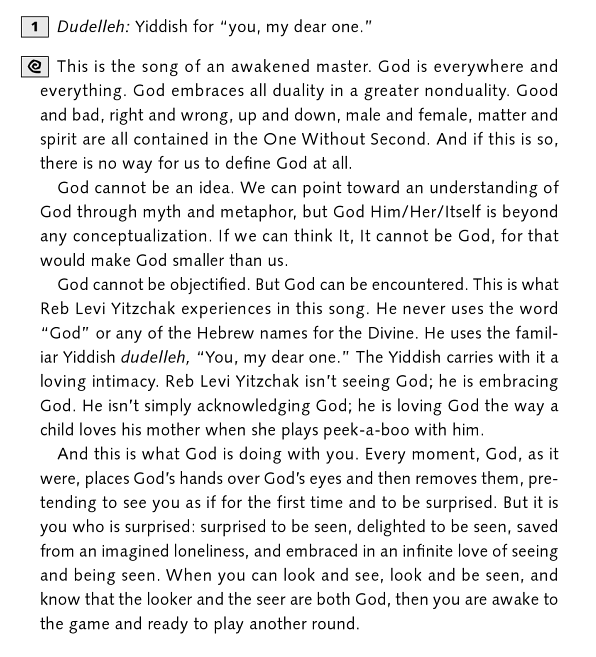 Francis has even borrowed the concept of a child's love for his mother as being like a person's love for god from Hasidism.  Francis homily on 11 December 2015,

“God’s closeness is such that he is presented like a mother, a mother who talks to her baby, and sings lullabies to her baby” The Pope said that the mother even taken on the voice and the language of a child so much so she can seem ridiculous if one does not understand how great the context actually is..."


Barbara Lerner Spectre, who is infamous for one of her anti-Christian quotes (see video below) and is trying to eradicate Christianity from Europe, also believes in a God of surprises.  In an essay she wrote on Judith, the hidden heroine of Hannukah one reads,

straight from Barbara's own mouth 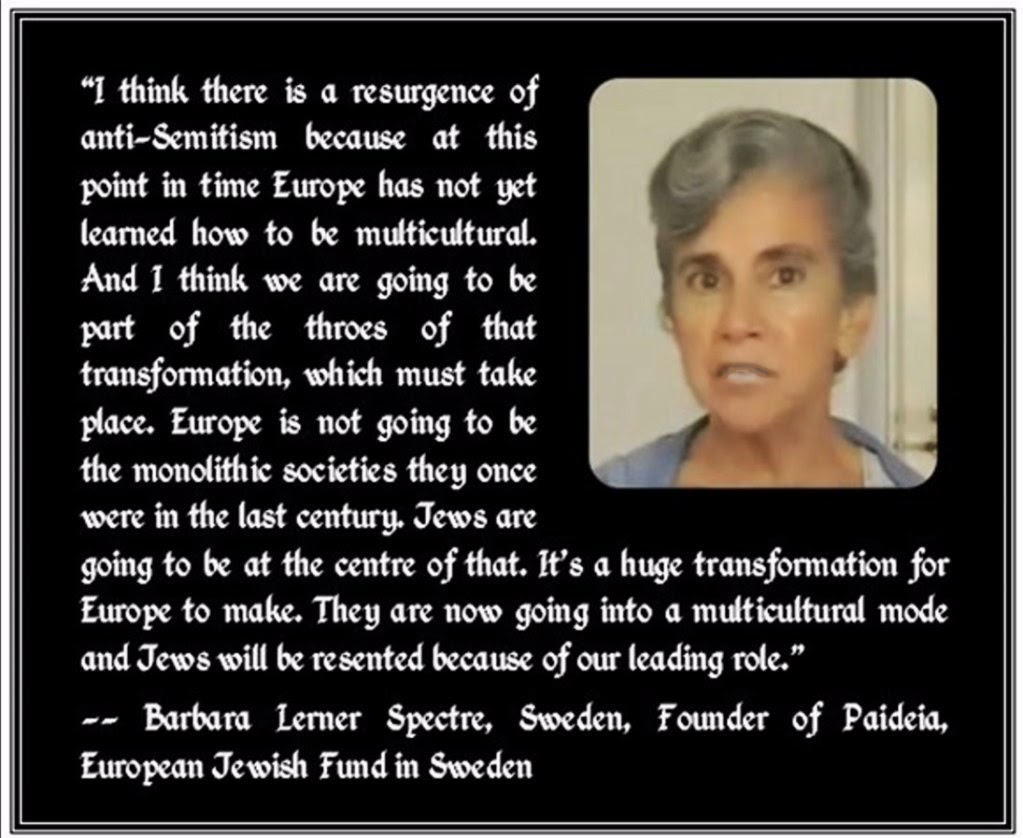 Interestingly, Francis with his pro-illegal immigration policy appears on the surface to also share in this goal of transforming Europe's religious demographics.   We guess Francis would sum it up by chuckling and saying, 'God is going to surprise the Europeans.'  On the return flight to Rome from Manila Francis taught,

"That example i mentioned shortly before about that woman who was expecting her eighth (child) and already had seven who were born with caesareans.  That is an irresponsibility (That woman might say) 'no but I trust in god'  But God gives you methods to be responsible. Some think that, excuse me if i use that word, that in order to be good Catholics we have to be like rabbits. No. Responsible parenthood! This is clear and that is why in the church there are marriage groups, there are experts in this matter, there are pastors, one can seek and i know so many, many ways out that are licit and that have helped this. you did well to ask me this"


This sounds to our ears as if Francis telling Catholics it is OK not to have large families.  Yes, he does use the word 'licit' but in today's world of the poorly catechised, how many know and understand what Francis was saying?  (We are giving Francis every benefit of the doubt here.)  We fear that like the media all that the listener heard was 'good Catholics shouldn't breed like rabbits'.

In a future essay we hope to write, we plan on addressing Francis' theme of 'encountering God' and how this concept has also been adopted from Hasidism which considers it one of the central tenets of their man-made religion.

This brings us at Call Me Jorge... to ask rhetorically, why doesn't Francis take his concepts of God from the tradition of the Catholic Faith as handed down by the Church?
Posted by hereisjorgebergoglio at 7:31 AM