As one can tell by the title of this blog, it is on the life and times of Jorge Mario Bergoglio.  Br. Alexis Bugnolo interviewed Senor Jack Tollers at the From Rome blog.  On its own this is a very interesting piece which helps flesh out exactly who Francis is.  One interesting tidbit of information is in the answer to question number five,


"Rabbi Abraham Skorka who happens to live with him in Santa Marta, believe it or not."

What!?  A Talmudic Jew living at the Vatican and one who is a rabbi!  This would explain much about the reading material of Francis and where his ideas are originating, if it can be confirmed.  The interview follows below. 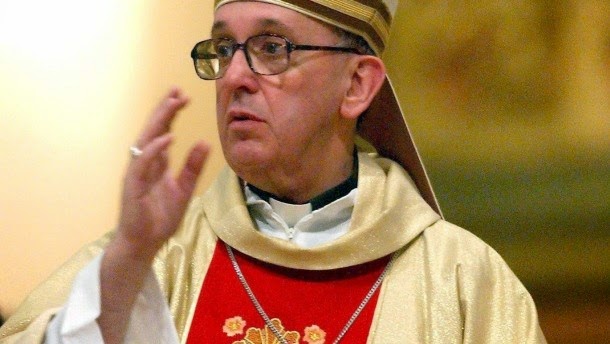 An Interview with Señor Jack Tollers

February 12, 2015: There has been avid interest in the person behind Pope Francis since the evening he first walked out on the loggia of St. Peter’s Basilica on the fateful day of March 13, 2013.  Since that time the main stream media has done little to inform the world about who Jorge Mario Bergoglio really is or really was.

To fill in this lacuna, the From Rome blog is honored to host an exclusive and new interview with a leading Catholic from the Archdiocese of Buenos Aires, Señor Jack Tollers, who has extensive experience in criminology. He is the author of the book, Fr. Leonardo Castellani: an Introduction, available from Smashwords.com.

Here is the text of our unedited interview, which we conduced by email:

Q.1 Can you tell the readers of the From Rome Blog something about yourself, where you are from, what’s your education and professional background?

I’m a middle aged Argentine with an English mother and an Argentine father, born in Buenos Aires, partially educated in England and France. A criminal prosecutor, I have been married for the better part of nearly 40 years, with one of those “bunny-like” families Bergoglio seems to hate so much (fifteen grandchildren and counting).

Q.2 What parts of Argentine have you lived in?

I have lived most of my life in Buenos Aires’ outskirts.

Q.3 When did you first hear the name Jorge Mario Bergolio?

I think that that was in the early eighties when he became the Rector of the “Colegio Máximo”, the Argentine Jesuit’s main college, not far from where I live. In those days a group of us youngsters were very good friends with a local Jesuit priest very much known for his anti-progressive stance. In those days, most Catholics in this country leaned one way or the other. But I remember quite distinctly how this Jesuit told us that this Bergoglio fellow played quite another game, playing the progressive music most of the time, but now and again switching sides to the more conservative band if need be. This was when John Paul II had been recently elected and of course there was quite a lot of “band switching” going on in those days. But Bergoglio did it in a somehow blatant manner that was the talk of those days, all of it underscored by a surprisingly successful career. 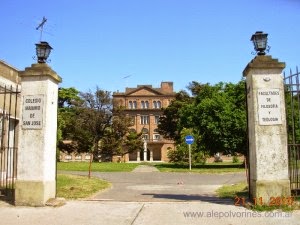 Q.4. What did the newspapers say of him when he was Archbishop of Buenos Aires?

Bergoglio was very wary of the Press in general, and had few friends among journalists in general. However he was always very much highly touted by “La Nación”, the country’s “serious” newspaper (if you know what I mean), and always openly praised by it’s  foreign correspondent in Rome, one Elisabetta Piqué, who’s 2001 interview of the recently appointed Archbishop was something of a scoop. By 2005 she wrote that Bergoglio had very good chances of being elected Pope, and when Benedict was finally chosen, said that Bergoglio had been the Cardinal’s second favorite. Of course, none of us believed it, not for one second. Now we take her more seriously. But going back to your question, I don’t remember any Argentine newspaper (except “Página 12”, and that for political reasons only) criticizing Bergoglio, ever, on any count (even when same-sex marriage was legally approved in the country: despite the general brouhaha that preceded and ensued, Bergoglio kept to himself in a very who-am-I-to-judge fashion).

Q.5. Do you know any of his family or friends personally?

His family is very small and from quite humble origins (the class question cannot be discarded here, it is quite obvious that Bergoglio resents any mention of his parents or sister). So nobody that I know of has ever known or met anyone of his family. As to friends, he never had them, not old friends, that is to say, friends who have nothing to do with his personal ambitions, his power games, his downright careerism. Not a single Jesuit, not a single priest, not a single friend from old times, shall we say. A quite different story you will hear if you refer to people like Rabbi Abraham Skorka who happens to live with him in Santa Marta, believe it or not. 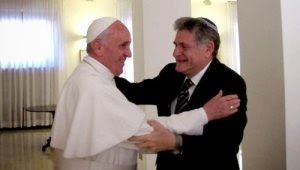 Q.6. Do the Jesuits in Argentine have or did they at one time have, a reputation for fidelity to the Catholic Faith?

Yes, I suppose so, before Vatican II, Jesuits were generally seen as conservative in a conventional, freezed, deadpan way, I suppose so. Fr Castellani was their enemy and he got into hot water when he decided to confront them in the Forties, long before the Council. He was expelled by these conservative Jesuits who later were to play the liberation-theology game, among other things. But of course, as Louis Bouyer has so frequently pointed out: yesterday’s conservatives are today’s progressives, because they are in the same league, a league in which truth, fidelity and so on are… how shall I put it?, subject to change. But all this is irrelevant: Bergoglio is way over these sort of distinctions, he doesn’t give a fig, he belongs to altogether another cabal.

Q.7 Did he have a reputation for fidelity to Catholic Doctrine, when he was in Argentina?

He certainly did not.

Q.8. There is a very disturbing report by Sandro Magister, “Francis’ Patient Revolution”, Expresso Online Oct. 24, 2014, at  http://chiesa.espresso.repubblica.it/articolo/1350910?eng=y . In this report, it says that as Archbishop of Buenos Aires, Bergoglio actively promoted the reception of communion by those who were not living in accord with Church rules.  Is that true, are the sources reliable? Do you have any personal knowledge that this was the case?

Everyone in this country knows of Bergoglio’s typical dealings as those depicted by McGavin (see Magister’s article). By the way, Magister’s take on Bergoglio is, in general, spot on.

Q.9. In all his years as Archbishop of Buenos Aires, can you cite anything which he said or taught which was contrary to the Catholic Faith?

Nope. That wouldn’t be Bergoglio. He just isn’t like that. One must never forget that, before anything else, he’s a Jesuit (and if St Ignatius didn’t want his offspring to take up high positions in the Church, then he had very good reasons to forbid them doing so. Not that they would ever obey him here, ha, ha).

Q.10  Some Catholics, confused by Bergoglio’s speaking style, consider it very likely that he is a sociopath, namely, that for him, there is only the right and wrong which his conscience agrees with, and that this right and wrong is not based on Christ’s teaching, but on his own personal whims.  Do you think that is an accurate description of the man?

Yes, I agree. But a “sociopath”? That was Kolvenbach’s take on him when he quite publicly opposed Bergoglio being appointed Archbishop of Buenos Aires. And yes, lots of people think he’s in some way or another a deranged person. But I’m not so sure. For instance, what we take to be a “confused” manner of speaking is no such thing for him. In Bergoglio it’s deliberate, it’s a way of going forward, it’s an agenda. No “whims” here. His “confused” speak responds to a “confused” faith, which in turn only echoes a very, very, confused character whose name I will not mention here. But who is out to confuse us all. If that maddens us, it doesn’t mean that they (pace C.S. Lewis) Screwtape, his nephew, et al, are entirely mad, in the sense that they think and act meaninglessly, without a purpose.

Q.11. Was Cardinal Bergoglio ever friendly with the Freemasons in Argentina?

As I’ve said, he has no friends. But, yes, I wouldn’t be surprised. In this country now and again they express praise for the man and celebrated his election in quite a public manner.

Q.12 Is it possible that Pope Francis is consciously and deliberating trying to transform the Church into something more compliant with the New World Order?

Of course. If not something worse (but that defies description).

Posted by hereisjorgebergoglio at 12:49 AM