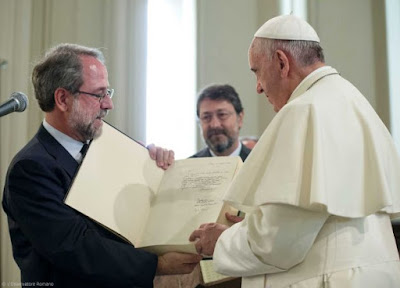 Eugenio Bernardini, the Moderator of the Waldensian Church presents Francis
with a facsimile reproduction of the first Waldensian Bible.

During Francis' two day visit to the city of Torino, he visited the Chiesa Valdese di Torino.  He did several things there which we hope to cover in the near future on Call Me Jorge... but only one which will be the topic of this entry.  Francis kissed the bible of the heretical Waldensian church!  This bible was translated into French by Pierre Robert Olivétan at the behest of Piotr Valdo and published in 1535 because Piotr felt that the Latin Vulgate of the Holy Roman Catholic Church was faulty.  Since it was filled with errors or so they believed, Olivétan based it off of his translations of Greek and Hebrew texts he had access to.  Interestingly the introduction to his bible was written by his cousin, another famous heretic, none other than John Calvin himself! 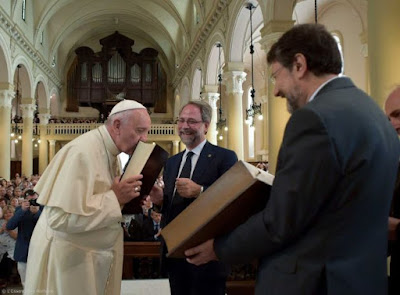 Here's Francis kissing his gift from the Waldensian Church, their heretical bible! 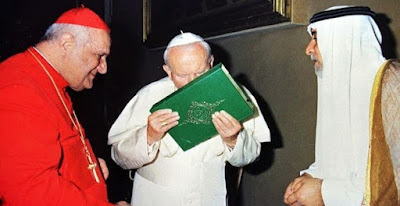 We feel it's only a matter of time until Francis kisses a Koran like St. John Paul II.
Posted by hereisjorgebergoglio at 11:22 PM