Francis Address to the Delegation of B’nai B’rith International

I am pleased to greet you during your visit to the Vatican. My predecessors met with delegations of B’nai B’rith International on several occasions, and today I offer you my welcome with renewed respect and affection.

Your organization has enjoyed relations with the Holy See since the promulgation of the Conciliar Declaration Nostra Aetate. This document constituted a milestone on the path of mutual knowledge and esteem between Jews and Catholics, based on the great spiritual patrimony that, thanks be to God, we share in common.

Looking back on these fifty years of regular dialogue between the Catholic Church and Judaism, I cannot help but thank the Lord for the great progress that has been made. Many initiatives fostering reciprocal understanding and dialogue have been undertaken; above all a sense of mutual trust and appreciation has developed. There are many areas in which we as Jews and Christians can continue to work together for the good of the peoples of our time. Respect for life and creation, human dignity, justice and solidarity unite us for the development of society and for securing a future rich in hope for generations to come. In a particular way, we are called to pray and work together for peace. Unfortunately, there are many countries and regions of the world that live in situations of conflict – I think in particular of the Holy Land and the Middle East – and that require a courageous commitment to peace, which is not only to be longed for, but sought after and built up patiently and tenaciously by everyone, especially believers.

During these moments together, I wish to recall with heartfelt gratitude all those who have fostered friendship between Jews and Catholics. I particularly want to mention Saint John XXIII and Saint John Paul II. Saint John saved many Jews during the Second World War, met with them numerous times, and greatly desired a conciliar document on this theme. Regarding Saint John Paul, his various historical gestures remain very much alive in our memories, such as his visit to Auschwitz and to the Great Synagogue of Rome. With the help of God, I wish to walk in their footsteps, encouraged too by the many beautiful encounters and friendships I enjoyed in Buenos Aires.

May the Almighty and Eternal One bless our dialogue abundantly, especially during this year in which we celebrate the fiftieth anniversary of Nostra Aetate, so that our friendship may always grow deeper and bear abundant fruit for our communities and the entire human family. 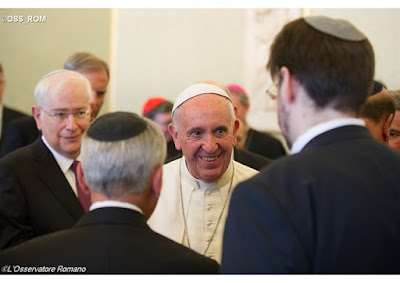 Francis friendship with his Talmudic buddies bears abundant fruit for their co-religionists. 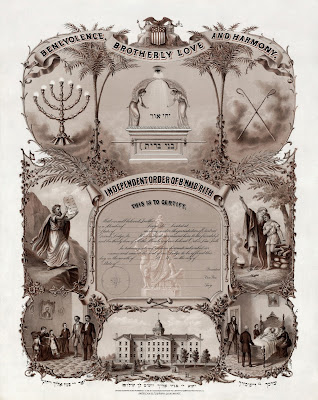 Since Francis has participated in several Kristallnacht services sponsored
by B’nai B’rith International, it is only natural to wonder if he has a
framed membership certificate in his rooms in Casa Santa Marta.
Posted by hereisjorgebergoglio at 12:39 AM