Tomorrow is the scheduled release date for Francis' newest encyclical.  The often delayed encyclical had a draft copy leaked to the press.  Since it is a 'Jubilee Year of Mercy', Francis the humble decided to demonstrate his Chesed of Gevurah and relieved Sandro Magister, the journalist who leaked the encyclical, of his 41 year old press credentials to the Holy See.  Imagine what he would have done if he hadn't been in so 'merciful' a mood! 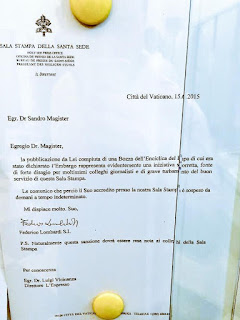 Call Me Jorge... took a cursory look at the Italian document and we were not impressed.  In it Francis quotes; the heretic Pierre Teilhard de Chardin (pushed the fraudulent 'Piltdown Man' as one example of evolution), Evangelii Gaudium #222, Ali Al-Khawwas (an illiterate Moslem Iman), then blames global warming on human beings, and much, much more!  It will be interesting to see how the final document compares to the draft copy and if Francis incorporated any suggestions from his 333 rabbinical brethren.  One can safely bet that the encyclical will be full of feel good platitudes which are there to further enslave the peoples of the world to the finance/usury elite and finish the steps of processing them into the Noahide mindset.

As for everything Francis utters, it is do as he says, not as he does.  Remember his trip down to Brazil for World Youth Day in 2013?  Francis' bishop ordered 334 century old trees to be cut down as to accomadate the anticipated crowd there to see Francis.  As told by Caitlyn Schmidt in U.S. Catholic's article Another reason for Brazilians to protest: Deforestation for the pope's visit,

As the country with the largest Catholic population prepares for the pontiff’s visit, church leaders from the diocese of Sao Sebastiao de Itaipu, in the city of Niteroi, are literally clearing the way for his arrival. Now negative environmental impact of land is being added to Brazil’s already lengthy list of reasons to protest.

To accommodate the expected 800 pilgrims who will join his for Mass, more than 300 centuries-old trees have been cut down at the edge of the Serra da Tiririca National Park and on church-owned property. The vacant land will now be enough to space for the papal Mass and all of the churchgoers.

Niteroi’s vice-mayor Axel Grael, however, claimed that church leaders never asked for permission to deforest the land. In an article in O Globo, a Brazilian newspaper, he said, “The incident is lamentable. An event for youth should be educational and demonstrate a commitment to the environment and the future. This removal is a criminal act.” Many Brazilian officials are pressing criminal charges against the Catholic Church for these actions.

Someone should definitely have been asked before they cut the trees down. To remove trees on private property is one thing (although probably not advised), but in a national park, it is illegal and, not to mention bad for the environment. 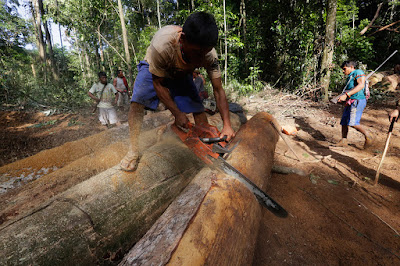 Cutting down the Brazilian rainforest for Francis.


“God always forgives … our misdemeanours, our abuse, God always forgives; men forgive at times; but the Earth never forgives. We must care for our sister the Earth, our Mother Earth, so that she does not respond with destruction.”
Francis, L’ Osservatore Romano, November 28, 2014, p. 16.


Francis' name is on the front door and he didn't own up to what the bishop under him did.  He can't even get the small stuff correct but he expects to get the big things right.  Just remember most members of the Novus Ordo Church will ignore the soon to be released encyclical when in fact it is doctrine as explained by Pius XII in Humani Generis,

20. Nor must it be thought that what is expounded in Encyclical Letters does not of itself demand consent, since in writing such Letters the Popes do not exercise the supreme power of their Teaching Authority. For these matters are taught with the ordinary teaching authority, of which it is true to say: "He who heareth you, heareth me";[3] and generally what is expounded and inculcated in Encyclical Letters already for other reasons appertains to Catholic doctrine. But if the Supreme Pontiffs in their official documents purposely pass judgment on a matter up to that time under dispute, it is obvious that that matter, according to the mind and will of the Pontiffs, cannot be any longer considered a question open to discussion among theologians.


We at Call Me Jorge... dread to read this upcoming encyclical.
Posted by hereisjorgebergoglio at 3:23 PM