Vatican confirms Fellay is a first-instance judge appointed by them

Will the FSSPX obey in this episode or disobey? 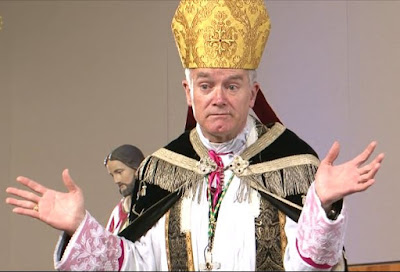 Excerpted from the article, Holy See puts Fellay in charge of trying one of his own priests, by Andrea Tornielli.


“Now, sometimes, unfortunately,” Bishop Fellay said, “also priests do silly things, and they need to be punished. And when it is very, very serious, we have to make recourse to Rome. So we do. And what does the Congregation of the Faith do? Well, they did appoint me as the judge for this case.  So I was appointed by Rome, by the Congregation of the Faith, to make judgements, canonical Church judgements on some of our priests who belong to a non-existent Society for them (for Rome,Ed.). And so, once again, a beautiful contradiction indeed.”

This is not the first time the SSPX has made recourse to Rome when it comes to “delicta graviora” and dispensations from priestly obligations. What is new in this case is that the former Holy Office headed by Cardinal Gerhard Ludwig Müller has decided to entrust the case to Mgr. Fellay himself, making him first-instance trial judge. An expression of attention. A sign that the path toward full communion with the Lefebvrians continues, as Archbishop Guido Pozzo confirmed in a statement toVatican Insider. He archbishop, who is also Secretary of the Pontifical Commission Ecclesia Dei, said: “The decision of the Congregation for the Doctrine of the Faith does not imply that existing problems have been resolved, but it is a sign of benevolence and magnanimity. I see no contradiction here, but rather, a step toward reconciliation.”

Readers will recall that another important sign came last April, when the Archbishop of Buenos Aires gave the green light for Lefebvrians to be registered by the Argentinian government as a “diocesan association”. Also, a large group of SSPX pilgrims was allowed to celebrate the Eucharist in Lourdes Basilica.

So why does Fellay speak of a contradiction? His comment was in reference to last February’s pilgrimage to Rome, which saw the participation of 1500 faithful. The pilgrimage was organised by Dominican sisters with links to the SSPX. A request was submitted to the Pontifical Commission Ecclesia Dei for mass to be celebrated at the altar of St. Peter’s Basilica. On this occasion, however, the heads of the Commission, decided that the celebration of a mass by a Lefebvrian priest before existing problems were resolved in view of canonical regularisation and full communion would have sent out the wrong signal. Nevertheless, Pope Francis gave his approval to a proposal for the requested mass to be celebrated in St. Peter’s Basilica but by an Ecclesia Dei priest and according to the old rite. Leaders of the Fraternity declined the offer.

Still, the Congregation for the Doctrine of the Faith’s appointment of Fellay as first-instance trial judge, shows that progress is being made in terms of the dialogue between the Church and the SSPX.

Read Fellay's May 2015 - Letter to Friends and Benefactors # 84 (by clicking here) in which he says that 2015 is indeed a 'Year of Mercy' but then corrects one of Francis' top men, Cardinal Maradiaga who is in charge of the committee reforming the Curia by the way, by writing that Maradiaga's mercy is one-sided and without repentance so therefore it cannot be true mercy!  In the same letter Fellay states the Church has lost its unity not only in faith and morals but also in the liturgy and government.  Is the water too hot or too cold Bp. Fellay?  Would you please make up your mind.  This quote from Fellay's letter is equally applicable to him and the society he leads [bracketed in bold are our changes],


It is very difficult to tell, since for two years [44 years] the messages coming from Rome [Menzingen] have been so contradictory, as some cardinals [priests] acknowledge privately and several Vatican [FSSPX] watchers openly admit.

Posted by hereisjorgebergoglio at 6:02 PM