What did Putin and Francis talk about at their meeting?

Call Me Jorge... speculates as to what was said during the 50 minutes.

On 10 June 2015, Vladimir Putin met with Francis at the Vatican.  The media made a big fuss out of Putin being one hour late for the appointment.  (This is funny because if one is a bishop who wants to meet with Francis, one basically shows up at the Vatican and waits for days, even weeks to talk to the man.  This is because Francis keeps his appointment book on his person and only shares his plans with his inner circle.)  Less important to them was what they discussed.  It was reported they talked of the Ukraine and the Middle East.  We wonder if they shared a good laugh that the head of NATO, Jens Stoltenberg worked for the KGB (code name "Steklov") or maybe Putin explained how Russia through its use of KGB assets Gerhard Schroeder and Angela Merkel (code name "Erika") helped make the European Union dependent upon Russian energy.  Perhaps, Francis even asked Putin if Max Krah was a Stasi agent.  More likely, Putin shared with Francis how he is helping to turn Russia into a multicultural cesspool by using the policies of Alesandr Dugin which promote illegal immigration, continue to allow abortion, and construct a pan Turkish-Russian Eurasia. 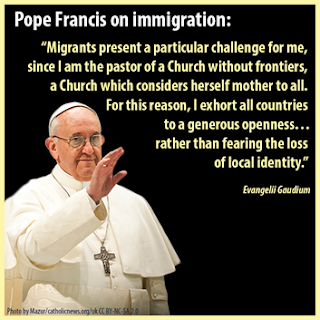 Illegal immigration is near and dear to Francis' heart.

They probably also compared notes on how they run their public relations and their respective countries by constantly keeping everyone confused.  Francis has certainly kept Bp. Fellay in that state of mind.

Of course it wouldn't be a Noahide meeting if Francis didn't share some stories of his first kosher job working for Talmudic Jews or how he helped hide communist books from the Argentine government for his mentor, Esther Careaga, who was yes a communist.


Did he brag about how he is helping
to Talmudize the Russian peoples?

Maybe they reminisced about...

...going to the Western Wall

Posted by hereisjorgebergoglio at 8:10 PM