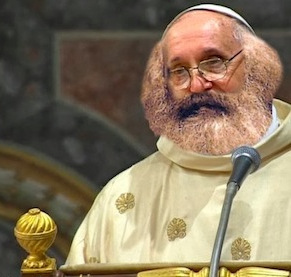 Francis is currently in the middle of a South American tour and in Bolivia.  Shortly after arriving, he stopped his motorcade at the spot where the dead body of Fr. Luis Espinal Camps, S.J. had been dumped and found. There Francis said a few words, “Dear sisters and brothers. I stopped here to greet you and above all to remember. To remember a brother, our brother, a victim of interests who did not want him to fight for the freedom of Bolivia.”  And concluded with, “May Christ draw this man into himself. Lord give him eternal rest and may light shine for him that has no end.”

Who was Luis Espinal?


Born in 1932 in Barcelona, Fr. Espinal studied both philosophy and theology before entering the Jesuit novitiate in Veruela in Zaragoza at the age of 17.

The same year he traveled to Bergamo, Italy to study audiovisual journalism. After two years he returned to Spain and began to work for Spanish radio and television corporation TVE at the height of Francisco Franco's rule.

Fr. Espinola denounced the censorships placed on TVE under Franco and left Spain. He moved to Bolivia in August 1968, where he took over as chair in the journalism department of the Bolivian Catholic University, and later become sub-director.

He was granted Bolivian citizenship in 1970, and over the course of the next 10 years worked in both the written and radio press, produced documentaries on social themes and got into screenwriting.

As an avid defender of human rights, the priest cofounded the Permanent Assembly of Human Rights in Bolivia in 1976. During the 1971 military coup led by Hugo Banzer Suarez, Fr. Espinola intervened on behalf of persecuted and detained politicians and trade unions.

In 1977 he participated in a three-week-long hunger strike to gain general amnesty for political exiles, validity of trade unions and the withdrawal of the army from mining centers.

In 1979 Fr. Espinola founded the weekly newspaper “Aqui,” which was quickly dubbed “leftist” due to its anti-establishment views and vocal criticism of government corruption.

As a result of his work, the priest was kidnapped by a group of paramilitaries March 21, 1980, while on his way home.

According to police and militants at the time, the militants took Fr. Espinola to La Paz' Achachicala slaughterhouse, where he was tortured for five hours before being shot 17 times. His body was found handcuffed and gagged the next morning.

In 2007, Morales officially declared March 21 as the “Day of Bolivian Cinema” due to the priest’s contributions in the area. On that day, cinemas and television channels are obliged to show national films, particularly relating to the themes of human rights and indigenous peoples.

Fr. Lombardi noted during a July 6 press briefing that no cause has been opened for Fr. Espinal's beatification. 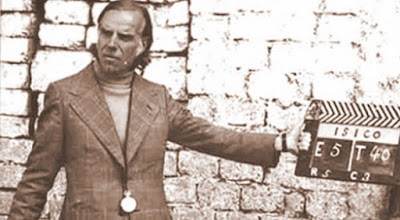 Fr. Espinal, who considered himself a "worker priest" remained in the capital, La Paz, where he lived in a poor neighborhood with two other Jesuits. He worked as a theater critic for the daily newspaper Presencia and initially designed his own show on national television, in which he reported on the "worker priests" and took interviews with members of the Marxist guerrilla movement Ejército de Liberación Nacional (ELN). In 1971 he was awarded Bolivian citizenship. From that year until his death he was a member of the Jesuit radio station Radio Fides and chief editor of the weekly newspaper he founded, Aquí as a mouthpiece left "popular movements". He supported the miners' movement, founded in 1976 the human rights organization, Asamblea de Derechos Humanos and joined a public hunger strike in 1977 with the demand for democratization.

Luis Espinal was one of a number of Jesuits and got closer to various forms of Marxism. Unlike his brothers he did not go over to armed struggle.

When the Leftist Nationalist, Lidia Gueiler Tejada from the interim Revolutionary Nationalist Movement of Bolivia, was the President of the Republic, Espinal was abducted and murdered on March 21, 1980. Whether the offenders were sent by the drug cartels that soon afterwards supported the dictatorship of Luis García Meza Tejada, or from one of the various rapidly changing, and disempowered military rulers could never be clarified. Espinal followers see the reason in his public criticism of an amnesty for crimes during the tenure of President Banzer.

source: Eponymous Flower, What is the Origin of the Hammer and Sickle Crucifix? -- Marxist Jesuit

Francis meets with Evo Morales and they exchange gifts

A fellow Spanish Jesuit priest, Xavier Albo, who worked with Luis Espinal wrote an editorial this past week in which he explained the  hammer & sickle crucifix hand carved by Espinal as well as relating a few of his experiences with him.  Albo said, the hammer & sickle crucifix expresses, "the necessary but elusive Marxist Christian dialogue with the workers and peasants, which made him the Christ of their votes he shows how the urgency felt in such a dialogue."

Luis Espinal left Spain because he felt stiffled by the censorship of Franco's government.  After Luis had lived in Bolivia for a time he wrote that, "The liberation of the workers will be the work of themselves." Yup, that sounds the opposite of what Christ said, "I am the way, and the truth, and the life. No man cometh to the Father, but by me." (John 14,6) 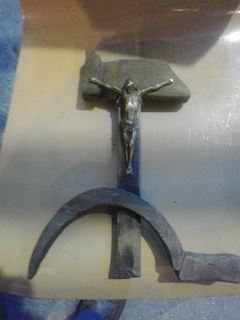 The hammer & sickle crucifix, hand carved by and used by the late Fr. Luis Espinal
Camps, S.J.  It is kept at the Jesuit headquarters in La Paz, Bolivia. 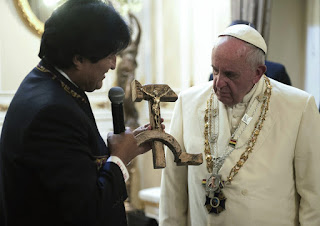 Francis didn't know Luis Espinal had carved a crucifix like this. 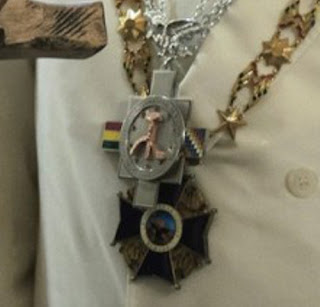 The two medals presented to Francis by Evo Morales.  Notice the same hammer & sickle crucifix as the emblem on the top one.  Also, the two co-official flags of Bolivia.  Since 2009, Bolivia has had two flags.  The rainbow colored flag is called the Wiphala of Qullasuyu or the Túpac Katari Wisphala and the rainbow supposedly stands for the indigenous people and the land they live in.  Coincidentally, the flag has 7 colors as does the Noahide Rainbow.  The Tupac Katari Guerrilla Army (Ejército Guerrillero Túpac Katari) traces its origins to the revolutionaries trained by Che Guevara.  We bring this last point up only because one of the Tupac Katari Guerrilla Army's former members, Álvaro García Linera, is the current vice-president of Bolivia.


News media outlets and conservative Catholic websites went into overdrive after the President of Bolivia, Evo Morales, gave the two hammer & sickle crucifixes to Francis as presents.  They claimed Francis uttered, “This is not right," when receiving the gift and used a still shot taken out of context, ignoring the smile seen in the video on Francis' face and the fact that he accepted both gifts!  Great job reporting guys!  Our take on it is that those in the media doing the reporting still see communism as evil and projected their own desires onto Francis and they further didn't do their work, checking what was actually said in the video.  In our opinion at Call Me Jorge..., Francis should have slapped Morales across the face for presenting him with blasphemous gifts like this and walked out of the room at the least.  Instead of the falsely attributed quote, he said, “I didn't know that.”  Doesn't sound like a condemnation does it?

And now the same in English:
[Morales:] Your Holiness, fortunately they have made the symbol of the hammer-and-sickle cross, which is probably the work of Espinal, Luis de Espinal. It’s an interesting symbol.
[Francis:] I didn’t know that.
[Morales:] Now you know.

source: NovusOrdoWire, Commie Crucifix Kerfuffle: What did Francis say to the Bolivian President?

Are you sitting down dear reader?  The Vatican said, the hammer & sickle cross was not a sign of ideology but one of dialogue!  They used the same explanation Xavier Albo gave.  Thanks for the clarification Fr. Lombardi.  The communists should remember that line next time they are massacring Christians.

Instead of reading Francis' new encyclical Laudato si', the Vatican and all Catholics should take the time to read  two encyclicals which condemn the same socialism and communism Francis so admires.

We can't think of a more astute observations than what one commentator on twitter wrote. "this is bergoglio's liberation theology tribute trip...so this blasphemous hammer and sickle is his award trophy," and "one twitter image says it all... bergoglio is a communist.. he hides his communism behind the crucified Christ."


"I can only say that the communists have stolen our flag. The flag of the poor is Christian. Poverty is at the center of the Gospel."


"Communists say that all this is communism. Sure, twenty centuries later. So when they speak, one can say to them: 'but then you are Christian'."


"Let's say together with our heart: no family without a roof, no peasant farmer without land, no worker without rights, no person without dignified labour!"


“Land, roof, and work … It’s odd, but for some, if I talk about these [subjects], it turns out the pope is a communist.”


“Marxist ideology is wrong. But I have met many Marxists in my life who are good people, so I don’t feel offended.”


Francis in interview with La Stampa 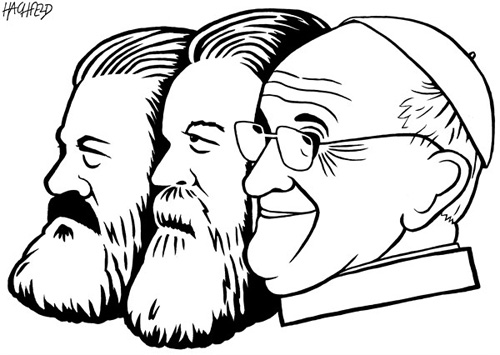 ...a Commie!
Posted by hereisjorgebergoglio at 11:56 PM