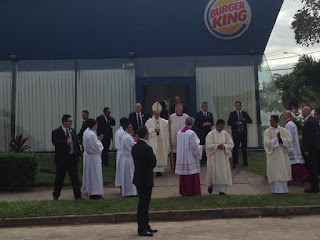 Burger King has long been providing quick meals. Pope Francis has now used it for a quick change.

With hundreds of thousands of Catholic faithful waiting, Pope Francis needed a place to don his vestments to celebrate Mass at the Christ the Redeemer square in Santa Cruz. He had just spent more than 30 minutes in his popemobile waving to thousands lined up on the streets as he drove to the square for the service.

Enter the restaurant known for Whoppers and fries.

The famously unpretentious pope used the fast food joint, which was closed for the morning for the papal visit, before walking to the nearby altar and beginning the Mass.

Alfredo Troche, manager of the Burger King, said the papal entourage approached the restaurant and "asked for help because this was an appropriate place and we had closed" to customers.

Minutes later, during his homily, Francis blasted consumerism. He said that by materialistic logic, everything becomes an object that can be consumed and negotiated.

The company wasted no time in letting the world know of the papal visit. Even before Mass had ended, the restaurant put a post on Facebook thanking the pope "for choosing the BK restaurant as your sacristy."

It also included an advertisement-like image showing the pope beneath a Burger King logo and the words: "There are visits that don't just bring joy to your spirit, but also feed it." 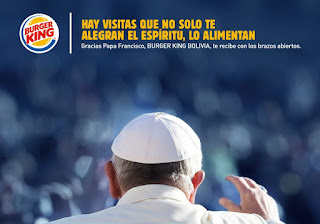 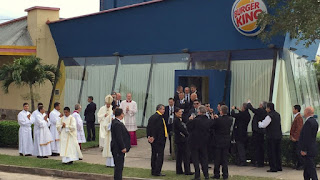 
The god of surprises must have been in town today!
Posted by hereisjorgebergoglio at 5:32 PM