In an future post one can read how the Mayor of Philadelphia sealed the deal on Francis' visit to his city by giving him six sport jerseys and by wearing a red Kaballah bracelet.   Another little known gift given to Francis during the Philadelphia delegation's visit were three types of dreidels.  We wonder has he played with them during Hannukah?  Below is an article on these dreidels which the author works in a connection to the concentration camps of World War II in a roundabout way and Rabbi Geoffrey W. Dennis explaining the mysticism of the dreidel.  Underlines are ours for emphasis. 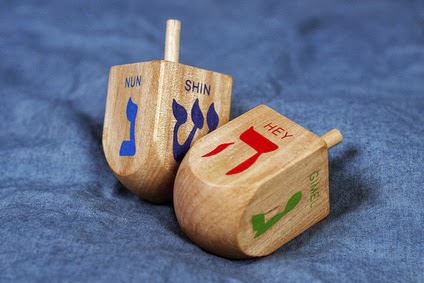 ROME - When Jeannette Lerman-Neubauer of Philadelphia steps forward to greet Pope Francis at an audience here Wednesday, the three small gifts she presents him might strike him as curious.

First, they are Jewish. They are also associated with children, not elderly popes. And they are traditionally used to celebrate Hanukkah, still many months away.
If Lerman-Neubauer has an opportunity to explain the gifts, she said she would tell Francis about the moving audience her father had with Pope John Paul II a decade ago. How John Paul, the Polish-born pope, and Miles Lerman, a founder of the Holocaust Museum in Washington, shared memories of the Nazi extermination of Polish Jews during World War II.

"They were both focused on reconciliation," Lerman-Neubauer explained in an interview.

Her visit with Francis will come as part of the delegation of Philadelphians who have traveled to Rome this week to highlight preparations for the Eighth World Meeting of Families, an international, Vatican-sponsored gathering that will meet in Philadelphia in September 2015.

She will attend along with her husband, Joseph Neubauer, chairman and former CEO of Aramark and one of a number of civic leaders from the Philadelphia region who have been tapped by Archbishop Charles J. Chaput to help raise money to host and stage the event. Chaput named Neubauer cochair of the World Meeting's board of trustees, which has already received pledges of $5 million.

That a Conservative Jewish couple would choose to involve themselves in so emphatically a Roman Catholic event might seem unusual to some, said Lerman-Neubauer. "But Philadelphia has always had a long history of interfaith cooperation," she said, noting that Benjamin Franklin was a contributor Congregation Mikveh Israel, the city's first synagogue. "That gesture has always touched me deeply," she said. "I think it speaks to the character of our city."

Lerman-Neubauer, 64, said she had no expectation of meeting Pope Francis when her husband first agreed to serve as cochair of fund-raising. But when she learned several weeks ago that a delegation from Philadelphia - including her and her husband - would meet with him in late March, she remembered her father's own encounter with John Paul in 2004.

Miles Lerman grew up one of 10 children in Belzec, in eastern Poland, and was a teenager when World War II began. His parents and grandparents and seven siblings were soon rounded up and sent to death camps, but Miles Lerman was assigned to a slave labor camp building a road.

The Nazis erected the first of their notorious death camps in Belzec, where more than 500,000 Jews were eventually put to death. Lerman himself might have been sent to die had he not overpowered his guards one day and made an escape. He survived the war, Lerman-Neubauer said, by working with the Polish underground resistance. He met his future wife, Chris Laks, after the war at a displaced persons camp in Poland, hoping to learn if any of their family members had survived.

Few had, and Laks was lucky to be alive. She and two of her sisters had first been sent to Jewish ghettos and then assigned to forced labor, first at Treblinka, then Auschwitz. But as the German war effort began to falter and Russian troops pushed west, the Germans sent many of the labor camp inhabitants on a forced march. En route, her mother and her sisters were able to hide in some woods and survived the war's end.

After her father and mother married, they moved to New York City and then settled in Vineland, N.J., where - with their limited English - they could live economically as farmers. Miles Lerman eventually became a distributor for Amoco Gas Co., grew wealthy, and in the 1970s, around age 60, began to get involved in growing effort within the United States to memorialize the Holocaust.

He raised millions of dollars towards creation of what would become the National Holocaust Museum. Lerman also led and funded efforts to create a visitors' center and small museum at what remained of the neglected and largely overlooked Belzec death camp, where members of Joseph Neubauer's family had been executed. The center was dedicated in June, 2004.

Although Pope John Paul II was unable to attend due to failing health - he would die the next year - he asked a Polish cardinal to represent him at the dedication ceremony and invited Lerman and his wife to meet with him in Rome.

Barely able to speak, the ailing pontiff nevertheless "lit up" when Lerman was presented to him, and reached out to pat him on the cheek, a moment that was captured by Vatican photographers and became a treasured family memento.

"My father was beaming. He had this beatific glow," she recalled. "I think it meant so much to them because, when they were in the war, fighting to survive, they felt there was nobody who cared for them.

"To find themselves in the presence of the pope, who was working so hard towards Jewish-Christian reconciliation, and to make sure that such horror never happens again - well I think it recreated hope for them. It recreated trust the power of good will vanquish the power of evil."

Miles Lerman died in 2008. His wife is still active in promoting awareness of the Holocaust.

And so, as she and her husband began to plan for their own meeting with Pope Francis this week, she struggled to think of a suitable gift.

Unsure what type of dreidel to give Francis, she settled on three. One, carved from olive wood, comes from the Holy Land. Another is a piece of folk art, folded from magazine paper. And the third is "painted wood. Not fancy.


Rabbi Geoffrey W. Dennis on the mysticism of the dreidel: 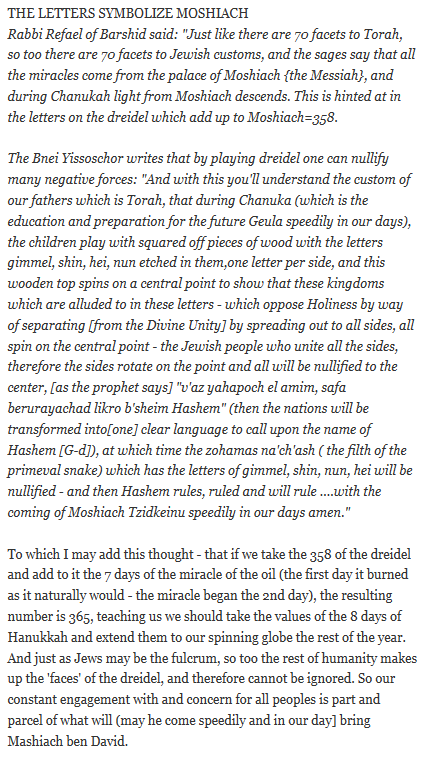 
**Hannukah = the miracle of Hannukah in Talmudic Judaism was that the oil burned for eight days instead of  one because their god was showing his continued adoration of the Jewish people.  (for more see, The Hannukah Hoax) 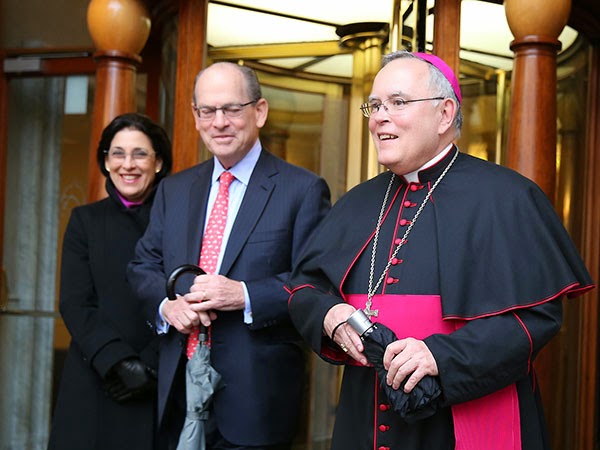 Don McLean - Dreidel
Posted by hereisjorgebergoglio at 11:20 AM