Celebration of Nostra Aetate
A three-day symposium at The Catholic University of America
May 19-21, 2015 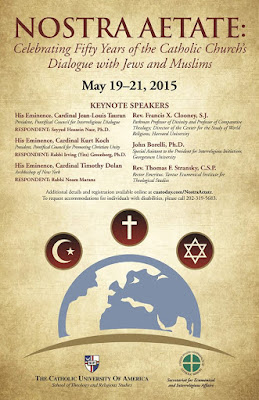 Welcome Message from the Dean:

One of the most significant documents produced by the Second Vatican Council was Nostra Aetate, the Decree on the Relation of the Church to Non-Christian Religions, which expressed the Catholic Church's positive regard for other faiths which often reflect a ray of that truth which enlightens all people, and in particular put Catholic-Jewish relations on a whole new footing, deploring anti-Semitism and emphasizing the 'common spiritual heritage' between Christians and Jews. 2015 sees the 50th anniversary of this great document, and The Catholic University of America and the United States Conference of Catholic Bishops warmly invite you to an outstanding conference to mark the occasion. Three cardinals will deliver keynote addresses, Cardinal Dolan of New York and Cardinal Koch from the Vatican on Catholic-Jewish relations, and Cardinal Tauran from the Vatican on Catholic-Islamic relations; further distinguished speakers from CUA and elsewhere will consider the art of dialogue, the links between interreligious dialogue and ecumenism, what can be learnt from Asian religions, and prospects for the future; and Rev. Tom Stransky who was actually there, will reflect on the drafting of Nostra Aetate. Please join us for this landmark event!

Note: The 50th anniversary of the document Nostra Aetate, published by the Second Vatican Council, is an opportunity to bring together not only distinguished keynote speakers, but also local and national volunteers interested in ecumenical and interreligious dialogue with partners from Jewish, Muslim, and other religious traditions. Accordingly, as well as, offering a more general open program available to the public, the conference will include closed sessions in which Catholics and Muslims, and Catholics and Jews, respectively, will meet in official dialogue.


source: The Catholic University of America, Celebration of Nostra Aetate

1 hour 8 minutes A woman in the crowd thanks Dolan & marans for their speeches and says it is, "really shaking our souls and our hearts."  This brings to mind the words of Rabbi Arbraham Heschel, who helped draft Nostra Aetate, "I want to attack their [Christians'] souls."


We cover the following a second time as we at Call Me Jorge... cannot stress this point enough.  Rabbi Marans at the 53 minute mark in above video talks of using the Talmudic tradition of the rabbis as a lens for understanding the impact of Nostra Aetate.  This Talmudic tradition, we remind the reader, nullifies God's laws.  Marans says that in today's Judaism the written Torah can only be understood by the Oral Torah.  And that the same can be said about Nostra Aetate.  He further states Nostra Aetate wouldn't exist without the 'Oral' or rabbinical Nostra Aetate.  This is a candid admission from a rabbi that the faith practiced by the post-Vatican II church is no longer Catholic.  Cardinal Dolan and company sit there and do not object.  Is it any wonder Our Lord said,


"But yet the Son of man, when he cometh,
shall he find, think you, faith on earth?"

The enemies of Christ are in charge and the sheeple in the pews go along with them as they have for so many years.  Did the sheeple forget to learn their catechism?  Or do they worship the rabbinical gods too?

Posted by hereisjorgebergoglio at 9:35 AM