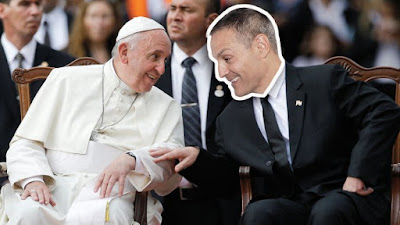 Let me tell you how my father was a terrorist and helped blow up 91 people!

According to The Hollywood Reporter, Francis' representatives have approached Patrick Whitesell, Brian Grazer, Oprah Winfrey, Matt Damon and David Geffen in addition to Ari Emanuel to a special meeting which will take place at the Vatican in the fall.  Francis, "apparently is interested in discussing how the church is perceived by Western media influencers and ways to improve its portrayal in entertainment."

Is Francis' elevator out of order?  Doesn't he realize these same people are responsible for using Christ's name in vain and God's name in vain in television, the movies, and music?  These same people are also guilty of pushing sex in their products.  How about misogyny and curse words?  What about immoral dress?  Or sodomy?  Or gratuitous violence?  And drug use?  We at Call Me Jorge... believe that Francis' elevator is fully functional and that he shares these revolutionary values with these vile people.

Francis should worry less about how the church is perceived by the Talmudic Jewish media and be more concerned about how God perceives him and his un-Catholic behavior.
Posted by hereisjorgebergoglio at 12:10 PM