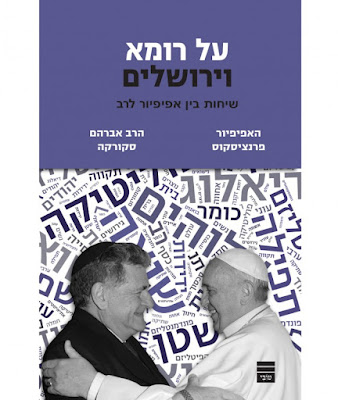 We tire of writing about the Talmudic blasphemies against Our Lord, Jesus the Christ and the Catholic Faith but few seem willing to point them out.  Back in Argentina in 2010, Jorge Mario Bergoglio and Abraham Skorka published a book together from their conversations about religion, economics, morality, life, science, etc...  It was named, Sobre el cielo y la tierra.  After Bergoglio was elected to the papacy in 2013, it was reissued in a new Spanish edition as well as translated into English as On Heaven and Earth: Pope Francis on Faith, Family, and the Church in the Twenty-First Century.  It was considered such an important work it was eventually translated into Hebrew in 2014.

The Hebrew edition is entitled “About Rome and Jerusalem: The conversations between a Pope and a Rabbi”. It is beautifully translated, attractively presented and has a series of footnotes to help the Jewish reader negotiate the Christian passages in the text. It is good preparatory reading for the upcoming pilgrimage of the Pope. President of Israel Shimon Peres endorsed the book with the words: “Their conversations forge confidence, arouse inspiration and bestow hope for peace”.


Interestingly when Call Me Jorge... ran the Hebrew title (על רומא וירושלים :שיחות בין אפיפיור לרב) through several online Hebrew to English translation programs they gave us, Rome and Jerusalem: Rabbi Talks with Pope.  A slightly different slant to the title which brings to mind the title of the magnum opus of Moses Hess, The Revival of Israel: Rome and Jerusalem.  On the website of the Saint James Vicariate For Hebrew Speaking Catholics in Israel an article, Bergoglio and Skorka in Hebrew, it mentions that Our Lord, Jesus the Christ is referred to in the book as "Yeshu" (the rabbinical acronym for "May his name and his memory be wiped out" which also appears in Francis' favorite piece of art, White Crucifixion by Marc Chagall) and priests are referred to as "komer" or idol worshipers.

As a footnote, we, as Hebrew speaking Catholics can express a certain disappointment with the volume. Despite considerable progress in dialogue between Jews and Christians, the publishers chose to maintain a traditional vocabulary about Christianity, using the word “Yeshu” to translate Jesus and the word ‘komer” to translate the word “priest”.* Both these words are the product of centuries of polemics that we hopefully can begin to leave behind us.

At a time that Israel witnesses a series of hate crimes against Christians, the book bears witness though to the friendship, intimate conversation, mutual respect and collaboration that have developed between Jews and Catholics in the more recent past.

* “Yeshu” instead of “Yeshu’a” is a perversion of the name of Jesus in Hebrew and was used as a polemical curse, an acronym short for “May his name and memory be erased”. The word “komer” is used in the Old Testament only for priests that worship idols. The neutral word for priest is “kohen”.


Is this a joke? We fear not. Francis sends one message to those he says have never had their covenant revoked by God and are one of the sacred roots of Christian identity while simultaneously sending another to those who fill the pews in his macabre mockery of mercy for all but those who hold to the Faith.  Call Me Jorge... checked the Spanish and English language editions of the book and both Abraham Skorka & Jorge Mario Bergoglio hold copyrights.  Are we to believe the humble man who answers his own letters with cold-calls and gives impromptu invitations to the Vatican to all manner of revolutionaries doesn't know his book has these blasphemies against God in them?  Recall this is also the same man who never offends the Moslem religion and who gives unfounded respect to the Talmudic religion of the rabbis.  Who knows all the halakhic minutiae?  Who tells blasphemous jokes about Our Lord?  (See, Last Lunch)  Why Francis does!  As we have written here before,

"By the time Francis gets finished with his reign in the Vatican, the Novus Ordo church will resemble a synagogue and the Vatican a shtetl." 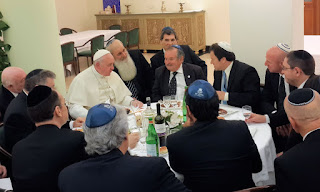 Posted by hereisjorgebergoglio at 2:10 PM