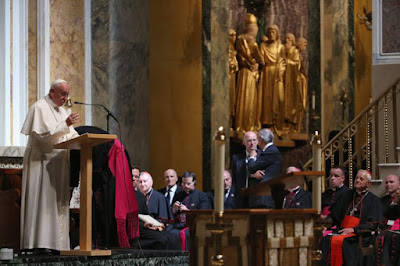 Francis addressing the bishops of the United States of America in
St. Matthew's Cathedral on Wednesday 23 September 2015.


The Pope didn't schedule an event this evening in honor of the eve of the important Jewish Holiday, Yom Kippur according to CNN.
— Colleen Hamilton (@Colleen_ham1) September 22, 2015


As can be see by the tweet above, CNN said that Francis wasn't attending any events the night of 22 September 2015 because he wanted to respect and honor the eve of the important Talmudic Jewish day of Yom Kippur.  Recall that the official first act of the pontificate of Francis within hours of his election was his drafting and sending a letter to Rome's Chief Rabbi, Riccardo Di Segni, calling for the continued strengthening of ties between Catholics and Jews.  So when Francis spoke to the bishops of the United States of America in St. Matthew's Cathedral on Wednesday 23 September 2015, it is fitting he started his address with these words,

"First of all, I wish to send a greeting to the Jewish community, our Jewish brothers and sisters, who today are celebrating Yom Kippur. May the Lord bless them with peace and help them to advance on the path of holiness, as we heard today in his word: “You shall be holy, for I am holy” (Lev 19:2)."


If the Talmudic Jews are "holy" without Christ, what is the point of Christianity? (Thanks to Michael Hoffman for pointing this out.)

(underlines are our for emphasis)

"For God so loved the world, as to give his only begotten Son; that whosoever believeth in him, may not perish, but may have life everlasting.  For God sent not his Son into the world, to judge the world, but that the world may be saved by him.  He that believeth in him is not judged. But he that doth not believe, is already judged: because he believeth not in the name of the only begotten Son of God.  And this is the judgment: because the light is come into the world, and men loved darkness rather than the light: for their works were evil.  For every one that doth evil hateth the light, and cometh not to the light, that his works may not be reproved."
— John 3, 16-20 —

"...God hath sent his only begotten Son into the world, that we may live by him.  In this is charity: not as though we had loved God, but because he hath first loved us, and sent his Son to be a propitiation for our sins.  My dearest, if God hath so loved us; we also ought to love one another.  No man hath seen God at any time.  If we love one another, God abideth in us, and his charity is perfected in us.  In this we know that we abide in him, and he in us: because he hath given us of his spirit.  And we have seen, and do testify, that the Father hath sent his Son to be the Saviour of the world.  Whosoever shall confess that Jesus is the Son of God, God abideth in him, and he in God."
— 1 John 4, 9-15 — 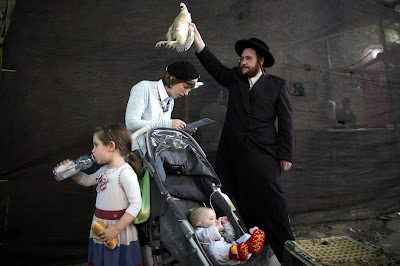 For more on the Babylonian Talmudic Jewish superstition of Yom Kippur & its voodoo ritual of Kaparot see:

Posted by hereisjorgebergoglio at 4:02 PM