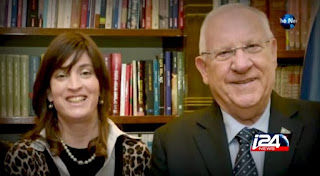 Rivka Ravitz, whom was in the recent post Talmudic R-E-S-P-E-C-T, is a trail blazing Renaissance Haredi (ultra-orthodox) woman and the President of Israel's Chief of Staff according to the video embedded below.  Rivka is President Reuven Rivlin's longtime assistant and served as his executive assistant when he was a Knesset lawmaker.  Later she served of his Chief of Staff when Rivlin was the Speaker of the Knesset.  She is also the mother of 11 children.  Francis didn't chastise her for 'breeding like a rabbit' because she isn't Catholic and he has respect for all things Talmudic.

Why does Francis show respect for the Talmudic religion but not Catholicism?


Posted by hereisjorgebergoglio at 11:49 AM