Get your barf bags out...

...the she who became a 'he' is to publish a book about her encounter with 'humble' Francis 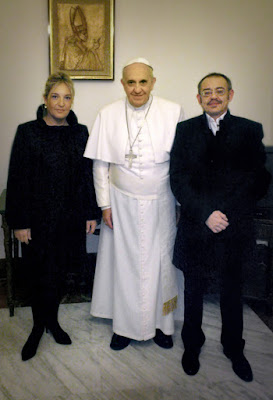 left to right: The fiancé, Francis, and Neria (Diego) the woman who styles
herself a man, pose for a photo after their private meeting at the Vatican.

For those who don't remember Neria (Diego)  Lejárraga, a brief refresher.  Neria was a woman the first 40 years of her life but she has a mental sickness in which she doesn't like being a woman.  Since she didn't like herself the way God created her she decided to do something about it.  She had hormone treatment, surgeries, and plastic surgery so that she could identify as a 'he' and began to call herself 'Diego'.  Neria was upset when people didn't accept this diabolical change with open arms.   So she wrote Francis who invited her to the Vatican.  Not only did Francis invite her there with her 'fiance' but he also offered to pay the same-sex couple's way.  To top it off Francis told Neria, a genetic female, on the phone, “God loves all his children, however they are; you are a son of God, who accepts you exactly as you are. Of course you are a son of the Church!” 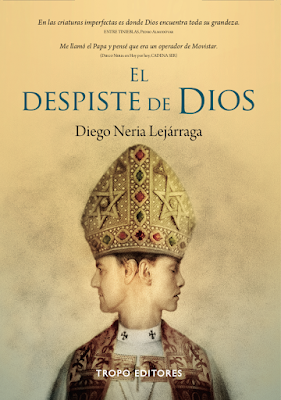 A teaser was released online the other day consisting of the cover and the first chapter of the book to garner interest in anticipation of the upcoming publishing date of March 2016.  The title of the book is 'El Despiste de Dios' which translates into English as 'The Mistake of God' The Spanish word despiste can also mean absentmindedness.    The first blurb on the cover reads, "En las criatura imperfectas es donde Dios encuentra toda su grandeza."  This translates into English as, "(it is) In the imperfect creature is where God finds his greatness."  This quote is from Pedro Almodóvar, who is a Spanish film director whose films are know for transgressing sexual morals boundaries.  Notice on the cover the hexegram mitre the two-faced bishop is wearing.  It looks just like the one Benedict XVI wore on 11 October 2009 for the canonization ceremony of five new saints. 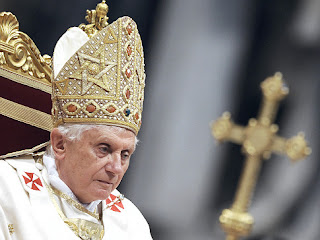 It has all sorts of kabbalistic magic symbolism on it.  This is Talmudic Judaism exaltedly imposing its amoral sexual mores over Christianity.  Not only is the two-faced bishop a symbol of the two-faced double-minded God, Janus, but also it is a symbol of rabbinic Judaism's hermaphrodite god.  This, taken into account with Naria's sex transformation, is an example of Tikkun Olam being performed in the world as Neria is restored to the prefall hermaphroditic state with male and female reunited.  Neria's DNA says she is a female but she appears as a he on the outside.  This is the nightmare of a world which the rabbis and, their noahide buddy, Francis want to create.

When will Michael Voris and the crew over at ChurchMilitant report on this?

Posted by hereisjorgebergoglio at 5:28 PM