Good news Bruce Jenner, Cardinal Burke would accept you as a nun! 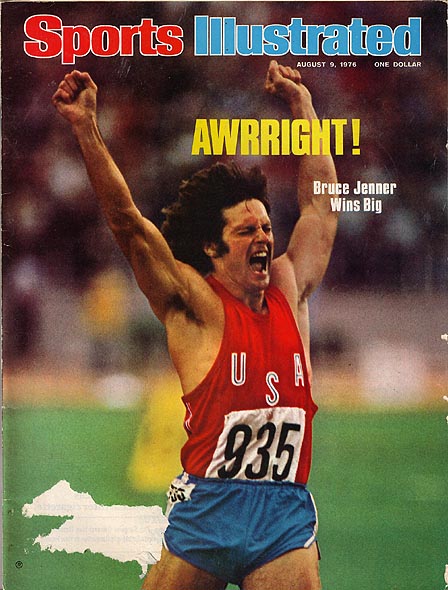 Bruce Jenner a man with mental illness who wants to be a woman.

We can hear the Cardinal's defenders say, "Burke would never do such a thing!"

These same defenders were extolling the virtues of Burke and thanking God that the conservatives had a champion like him earlier this year in January when Francis had Neria, a woman who styles herself a man named Diego, and her fiance over to Casa Santa Marta as his private guests.  Recall what Francis told Neria (who God created as a female),

"Why, if only someone else was in Rome, someone like Cardinal Burke!"

One quick question, has anyone heard Burke speak out about Francis meeting with Neria and uttering his words of false 'mercy' to her?

We didn't think so.

Then Bishop Burke playing the modernist game of hide the Crucifix.


"Thanks goodness!" they said when Burke spoke up about the Synod on the Family.

Michael Voris of churchmilitant.tv thinks so highly of him that he wants Burke to one day become Pope Leo XIV.

These same conservatives which took Burke's words out of context, overlook Burke's clarification of them,


“I’m not resisting Pope Francis, because he’s done nothing against doctrine.”


Which brings us to Bruce Jenner and Raymond Leo Burke.

Would Burke accept Bruce Jenner as a nun if he were Catholic?

Does anyone remember the Franciscan Servants of Jesus?  The Franciscan religious congregation for women was founded in 1993 (under Bishop Weakland), elevated in 1997 and approved of by the then Bishop Burke before being suppressed by him in late 2003. Turns out one of the two sisters who co-founded the order was in reality created by God as a man!

Interestingly, there was very little mention of this matter in the press. From the Riverfront Times's article, Bishop Takes a Queen,


"Julie Green is living a lie!" writes Mary Therese Helmueller in an October 25, 2002, letter to Archbishop Gabriel Montalvo, Papal Nuncio to the United States. "[She] is a transsexual, a biological male. He is really Joel Green, who had a sex operation to make him physically appear as a woman.... I fear that The Church in America will suffer another 'sex scandal' if Julie Green continues to be recognized as a Catholic Religious Sister, and if Bishop Raymond L. Burke receives his final vows, as a religious sister, on November 23rd, 2002."

Montalvo forwarded the letter to Burke, who on November 20, 2002, replied to Helmueller. "With regard to Sister Julie Green, F.S.J., the recognition of the association of the faithful which she and Sister Anne LeBlanc founded was granted only after consultation with the Holy See," he writes. "These are matters which are confidential and do not admit of any further comment.... I can assure you that Sister Julie Green in no way espouses a sex change operation as right or good. In fact, she holds it to be seriously disordered. Therefore, I caution you very much about the rash judgments which you made in your letter to the Apostolic Nuncio."

Adds Burke: "I express my surprise that, when you had questions about Sister Julie Green, you did not, in accord with the teaching of our Lord, address the matter to me directly."

Green and the Franciscan Servants weren't the only controversial religious order with which Burke allied himself. In the late 1990s, the bishop combined the parishes of St. Mary and St. James in Wausau, Wisconsin. The two parishes formed the Resurrection Parish at what was formerly St. James' Parish.

St. Mary's was sold. Burke then asked the conservative Latin-rite religious order, Institute of Christ the King Sovereign Priest, to perform the Tridentine Mass at what was formerly St. Mary's. In February 2002, the order's superior, Monsignor Timothy Svea, pleaded guilty to exposing himself to and molesting teenage boys.


What makes this tragic is Burke needed clarification from the Vatican on the matter!  This from a 'traditionalist' who at the time had or was a:

One would think with just the basic education a child receives from learning a Catholic catechism, one would know that a man cannot be allowed to be a nun much less found a new religious order and become its mother superior.  Thank goodness, Mary Therese Helmueller knew what a sin against God is and took action!

In January, 2003, a concerned parishioner from St. Paul, Minnesota notified us that a transsexual (man to woman) had been a religious Catholic sister for 18 years, ten years in the Milwaukee Diocese under Bishop Weakland in a women’s Franciscan order. Then in 1993 this transsexual nun went to the LaCrosse Diocese under the Bishop and received permission to found his/her own religious Catholic Women’s Order called “Franciscan Servants of Jesus”. On October 4, 1997 Bishop Raymond L. Burke elevated the order and was going to hear the final vows of Sr. Julie Green (Joel Green) on November 23, 2003.

The concerned parishioner sent copies of all papers that had been collected on Sister Julie to various authorities in Rome, but received no reply. Finally, the parishioner went to Rome and only when publicity was given to the case, was any action taken by the Church. Bishop Burke commented in a letter dated January 27, 2003 that unfortunately the situation had been publicized, denied that Sister Julie became a nun or was the mother superior of the religious order, and that “...such a person has been unable to emit valid vows except to the sex of his or her birth”.


At the time when all this went down, what was the Vatican's position on persons who had had their 'sex changed'?  In the article below from Catholic World News, we have sex change operations ruled invalid by the Vatican in 2000.  So pre-October 1997 when then Bishop Burke consulted with the Vatican about founding the Franciscan Servants of Jesus did it slip his mind to ask whether or not to find out if it was OK for a man posing as a woman to be one of the founders of the Order?  Did he think it perfectly alright?  Or was he in the dark about 'Sister Julie' Green? 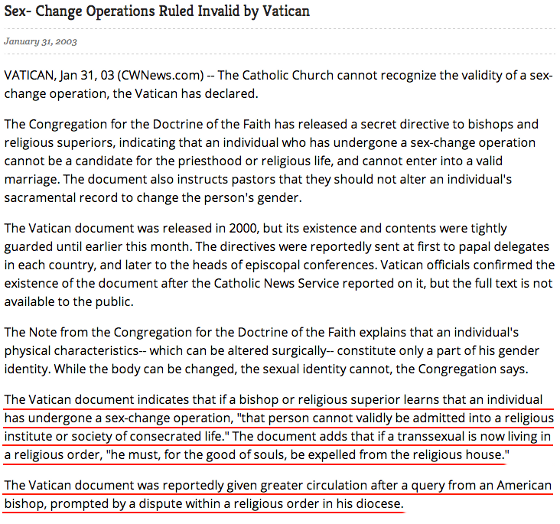 If the then Bishop Burke was in the dark about Joel Green posing as a female nun in his diocese, the best case scenario is that Burke is an inept leader.  If he wasn't then...

This isn't the only scandal to be associated with Burke.  There were his denials of sex abuse under his watch, the messy matter with the bizarre (and non-Catholic) St. Stanislaus Kostka Church,  and his appointing the sex-abusing priests of Institute of Christ the King Sovereign Priest to his diocese.  Not to mention his practicing religious rituals of the Talmud.  We at Call Me Jorge... believe Burke to be a false 'traditionalist' and the above demonstrates it.  He is a modernist!

We predict there will be no schism in the Novus Ordo caused by Cardinal Burke as he will go along with everything Francis does even if he might grumble about it.  Recall what Burke wrote in February 2014 in L’Osservatore Romano, his position is still the same today.  In fact we believe he will help Francis merge the Latin Mass & the Novus Ordo.

In this interview, Card. Burke also envisages the merge into one single rite of the Novus Ordo such as approved by Paul VI and the Tridentine Mass, as allowed by Benedict XVI in the Summorum Pontificum. He said: “It seems to me that what he [the Pope] has in mind is that this mutual enrichment would seen to naturally produce a new form of the Roman rite - the reform of the reform, if we may - all of which I would welcome and look forward to its advent.” (2) Here we have another confirmation by a Vatican official that we are heading to a hybrid Mass. Indeed, we heard Card. Kurt Koch saying something similar last year. 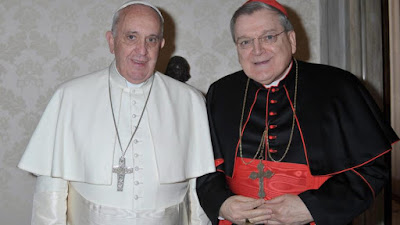 Francis and Burke, two modernist peas in a pod.


And if Bruce Jenner were to become a Catholic with the desire to become a nun, well based on past history Cardinal Burke would have no problem helping him to achieve this dream.
Posted by hereisjorgebergoglio at 10:52 AM