If the video above does not play try either this link or this alternative one.
The transcript of Skorka's speech is below. 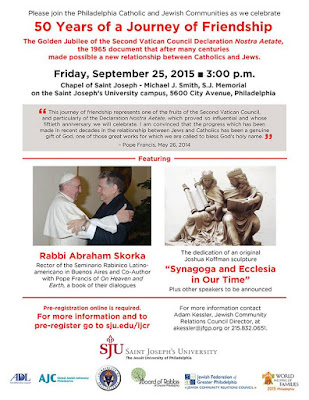 Nostra Aetate is the declaration approved by the Second Vatican Council on October 28, 1965.  It discusses the relationship between the Roman Catholic Church and the non-Christian religions. It undoubtedly created a theological turning point for the Catholic Church that fostered a new vision of respect and dialogue with the Jewish people.

Two fundamental axioms are developed in chapter 4 of this declaration, which is dedicated to the relationship between Catholics and Jews.

On the one hand, it removed any reason to doubt that the covenant which God shares with the Jewish people, described in the Hebrew Bible, is still considered valid from a Christian perspective. Therefore the special relationship between Jews and God continues into the present.  On the other hand, Nostra Aetate affirms that, although in the days of Jesus there were some Jews implicated in actions that ended in his crucifixion, one cannot impute guilt to all the members of the Jewish population of that time, let alone accuse Jews of later generations.

Once and for all, the ignominious vilification of a so-called deicide people, cursed by God, which was hung upon the Jews, and which justified their persecution, humiliation, and oppression, was abolished.

Nostra Aetate was the Catholic answer to the Shoah.  Centuries of Christian theology in which Jews were denigrated contributed to European anti-Semitism. The Nazis tapped into this deep-seated prejudice to build the death camps in cooperation with the active and passive indifference of a great part of the European population.  One third of the Jewish people, six million souls, were exterminated in the most atrocious form that human history records.

To recognize the Jewish People as fully loved by God after this abominable tragedy was an act of spiritual audacity which Saint John XXIII was able to introduce, something which had apparently  been  unattainable for Pius XII.

At the same time, this challenged Catholicism to construct a new theological vision based upon the rediscovered truth that the old covenant between the Creator and the Jews was not abolished. Thus both covenants, the new and the old, complement each other in seeking to elevate human beings spiritually and to guide them in building a reality of Justice and Love, of the redemption of the human being.

The Declaration Nostra Aetate, signed by Blessed Paul VI, served as a solid basis for a renewed encounter between Jews and Christians. On October 22, 1974, he created the Pontifical Commission for Religious Relations with Judaism, which redacted in 1974, 1985, and 1998 three very important and substantial documents developing the concepts that Nostra Aetate had referred to only in an embryonic way.

These documents – "Guidelines and Suggestions for Implementing the Conciliar Declaration Nostra aetate No. 4" (1974), "Notes on the Correct Way to Present Jews and Judaism in Preaching and Teaching in the Roman Catholic Church" (1985) and "We Remember: A Reflection on the Shoah" (1998) – helped to establish the habit of dialogue that Christians and Jews are able to enjoy today.

Through symbolic acts of enormous significance, Saint John Paul II profoundly reshaped the Jewish-Catholic relationship. The Great Synagogue of Rome is very near the Vatican.  It takes only a half an hour walking at normal speed to traverse the two places.  Yet many centuries had to pass for a Pope to walk this short distance to greet his Jewish neighbors. John Paul did this in 1986, the first pope to do so in perhaps two millennia.

He also established full diplomatic relations between the Vatican, the Holy See and the State of Israel. He asked for God's forgiveness for Christian sins of the past towards Jews, whom he called “elder brothers” and "the people of the Covenant."

Beginning with Nostra Aetate, the official teaching of the Church considers the relationship with the Jews as unique and special. This fact is reflected in Pope Francis' 2014 Apostolic Exhortation, Evangelii Gaudium. He writes:

We hold the Jewish people in special regard because their covenant with God has never been revoked, for “the gifts and the call of God are irrevocable” (Rom 11:29). ... Dialogue and friendship with the children of Israel are part of the life of Jesus’ disciples [§247-248].

I first came into contact with Jorge Bergoglio, today's Pope Francis, when he began serving as Archbishop of Buenos Aires. Being elder than me and holding such a high Church office,  I initially left the initiative for interfaith activities between us in his hands. Over time, I came to understand that in the course of his spiritual journey he had developed deep theological respect for Jews, , and that we shared a common understanding of the importance of dialogue in general and the interfaith dialogue in particular.  These were the reasons that bound us to one another. Each of us had recognized in the other the partner for the enactment of the commitment to interreligious dialogue that we both took as a central priority in our lives.

Rabbi Abraham Joshua Heschel´s “No religion is an island” was a guide and an imperative I incorporated into my soul. He was one of the most important Jewish contributors to the development of Nostra Aetate. Chapter 4 of the declaration echoes much of a statement the Rabbi sent to Cardinal Augustin Bea in the conversations they had while the Council was in preparation.

The founder of the Seminario Rabínico Latinoamericano, of which I am the rector today, Rabbi Marshall Meyer, was one of the beloved students of Heschel at the Jewish Theological Seminary in New York. Meyer spread Heschel's  ideas in Latin America, especially by translating his works into Spanish.

The spirit of Nostra Aetate and the ideas and challenges that developed in its aftermath impacted Cardinal Bergoglio and me and led us to write  a book together, to record 31 television programs, and to do so many other things together.

Since Bergoglio became Pope Francis, his commitment to the Jewish Christian dialogue  has been revealed through many deeds and statements.

The twentieth century witnessed, both before and after the Shoah, great Jewish thinkers and scholars who understood that the original dialogue between the first Christian community and its Jewish brothers needed to be started anew if Christians and Jews were to collaborate, each from their own perspective, in the construction of a better world. Mordechai Martin Buber, Joseph Klausner, and Abraham Joshua Heschel are some of the very many Jewish leaders who took it as a personal mission to renew this dialogue. Nostra Aetate, which was nurtured through the dialogue of Rabbi Heschel and Cardinal Augustin Bea, was the best answer to their dreams and ideals.

In the old city of Prague, at Number 1 of the Nový Svět (New World) Street, we find the house where the famous astronomer Tycho Brahe lived. The astronomical measurements of Brahe were the data with which Johannes Kepler was able to formulate mathematically his three laws concerning the movement of the planets around the sun.

A new world was discovered at that time.  The heliocentric description of the solar system, the existence of new continents to explore, the conquering of new navigation routes, as well as so many other advances allowed human beings to contemplate a New World.

Today we have brought our perceptions to Pluto at the fringe of our solar system. We have taken pictures of its surface , and received much entirely new  information. Mankind has begun deeply studying characteristics of a world that is no longer foreign to us.

The new challenge for humankind is not to discover a new world but to create a “new world”, a new reality with no more hunger or injustice, no hatred among peoples, no more wars. The world in which each individual enriches spiritually through the dialogue with neighbors in whom he or she sees a brother or a sister. The challenge facing us is to create a new world where each individual makes a place for God’s presence.

The ultimate aim of Nostra Aetate was to create a new reality for Jews and Catholics, a new world. A world in which they are not opposed but can actively study and learn together, and so enrich each other and assist each other in walking their covenantal lives with God. We are no longer "foreigners" to each other. This idea is represented by the very significant sculpture we are about to dedicate, which will remind all who will see and contemplate it in the future about the achievements of the past and the challenges for the future.

In the eighth century BCE, the prophet Isaiah (65, 17), said in the name of God, that God will create new heavens and a new world (earth), where no former tragedies will be recalled.

Among the Jewish sages there is a discussion about this that has been going on for centuries. They asked: Is humanity in its present psychic and spiritual condition able to fashion a reality of peace and concord at all levels, or does God have to substantially modify the originally created world in order for peace to come?

The masterly opinion of Maimonides is that the human being in his present condition is indeed able to construct a reality of dialogue and of peace.

Taking into account the human impulse and the individual struggle to pursue goodness in our lives, rejecting the wars and the cruel violence that afflict us daily, there are many who understand Isaiah’s hope for a new heaven and a new earth in covenantal terms: Humanity, the partner of God in the constant recreation of Creation, will co-create this hopeful New Cosmos -- a new Reality in which Nostra Aetate and those who were inspired by it, will have made a crucial contribution and helped pave the way. 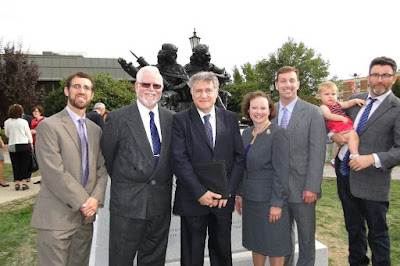