Mark Shea was right Elton John is preaching the 'gospel' 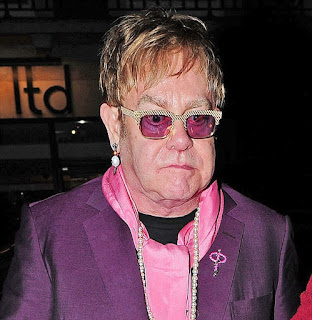 It's only a matter of time until Dwight repents, gives up his
sinful ways, dresses like a man, and acts like one as well!

Back in 2014 on October 31st, Mark Shea used his column, (see, Elton John greatly admires Pope Francis) to chastise those scandalized by the growing admiration for Francis by all sorts of malcontents and degenerates.  Shea wrote Francis was just going onto,


“highways and byways and bring in the poor, the crippled, the blind and the lame so that the wedding feast will be full.”


Are you kidding Mr. Shea?  Actions like this from Francis who said,


“proselytism is solemn nonsense, it makes no sense.”


Shea finished his column with this


“Will those attracted to Francis’ beautiful witness and obvious holiness need to repent of things? Of course. Don’t we all? But here’s the thing (and the point Francis tried to make last year in his America interview): You don’t start a life of discipleship with a set of moral precepts. You start it by an encounter with a person. The *real* magnetic force in Francis’ life is Jesus Christ. It is for us to introduce a person like Elton John (or whoever) to Jesus so that they can begin to grapple with his astonishing person.”
[...]
“–and why Francis is so very obviously a model for how we *should* be thinking about evangelism.”


So what message has Sir Elton John been spreading in the media?

“Keep going, keep pushing it. Change is very hard, especially within the Catholic Church, you don’t get things done immediately, you’re not going to persuade people, but you know change is just about keep going and keep going and suddenly in the end the wall will fall but he's got an enormous task. I don't envy him his job.  I think he’s on our side.”

Elton's not a Catholic but he would love to meet Francis

“I would love to meet him. I’m not a Catholic but from the first day he was elected he tried to bring a new message and tried change the Church and bring it into the 21st century. And he said this should be an inclusive Church. And for me that was a good message for him to bring.  It was a message of hope and it was a message of change and I think in the 21st century we need some change from the church, every church and we need hope and I think he's a man  that passionately believes that this is a good message to bring.”

It appears to us at Call Me Jorge... that Francis and Sir Elton Hercules John are on the same team. The team which has perverted God's promise to Noé by usurping the rainbow as their emblem to symbolize their sinful ways.

Posted by hereisjorgebergoglio at 12:18 PM