...is PETA as dense as Francis? 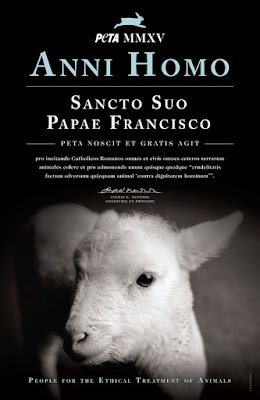 The first pope to take the name of St Francis of Assisi, patron saint of animals, is also the first to be picked as PETA’s Person of the Year.

Pope Francis earned the title for asking all citizens of the world to reject domination over God’s creation, treat animals with kindness and respect the environment – something that seems to us can only be interpreted as a subtle call to go vegan, given the well-established role of animal agriculture in climate change.
In his 2015 treatise, Laudato Si’, Pope Francis stressed the importance of treating animals with kindness, writing the following:

We have only one heart, and the same wretchedness which leads us to mistreat an animal will not be long in showing itself in our relationships with other people. Every act of cruelty towards any creature is ‘contrary to human dignity’.

It is contrary to human dignity to cause animals to suffer or die needlessly. #LaudatoSi
— Pope Francis (@Pontifex) June 19, 2015

He also included these important words to live by:

We are not God. … [W]e must forcefully reject the notion that our being created in God’s image and given dominion over the Earth justifies absolute domination over other creatures.

Pope Francis is also known for his focus on environmental stewardship – a concern that PETA shares through our vegan advocacy, as, according to the United Nations, a global shift towards vegan eating is necessary in slowing the most dangerous effects of climate change, including the extinction of wildlife.
With more than a billion Catholics worldwide, Pope Francis’ animal-friendly teachings have a massive audience. His Holiness is PETA’s Person of the Year for spreading the message of kindness to all, regardless of their religion or species, and we hope people will hear his message and choose a compassionate vegan lifestyle.

PETA turned a blind eye towards Francis' advocating for kosher slaughter back on September 2nd, 2013 when he met with officials from the World Jewish Congress.

The pope specifically expressed concern about the bans on kosher slaughter in Poland and directed Cardinal Kurt Koch, the president of the Vatican’s Commission for Relations with the Jews, to investigate and host a follow-up meeting as early as next week.
Francis reiterated a statement made last June that “a Christian cannot be an anti-Semite” and said that “to be good a Christian it is necessary to understand Jewish history and traditions.” 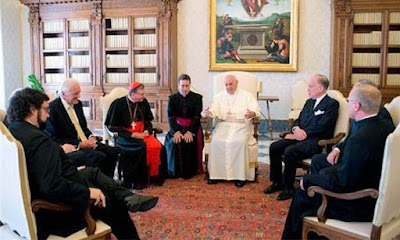 A short clip of kosher slaughter from a film made by PETA.
**** WARNING A GRUESOME VIDEO ****

CLICK HERE to view the film in it's entirety.

PETA's website says, “Animals are not ours to eat, wear, experiment on, use for entertainment, or abuse in any other way.”  So how does PETA figure naming Francis their person of the year, when he being an advocate for 'shechitah' (kosher) slaughter, was a good idea?


Maybe we at Call Me Jorge... should look at the bright side.  At least Francis wasn't named person of the year by a sodomite magazine again! 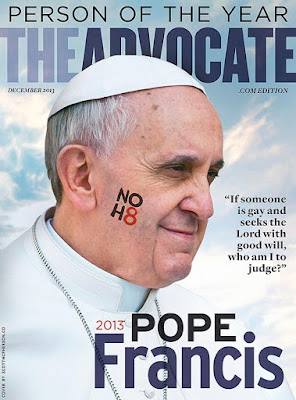 Posted by hereisjorgebergoglio at 9:42 PM