Sigh... does Francis ever shut up?

...another day, another interview 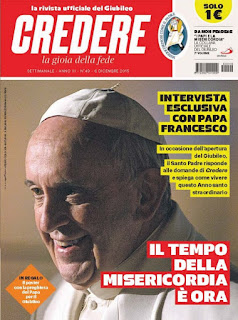 Credere, official magazine of the Jubilee of Mercy!

Francis conducted another interview, this time with "Credere" (Believe) the official magazine of the 'Jubilee of Mercy'. We wonder what is the official automobile of the 'Jubilee of Mercy'? The official snack?  Yerba maté?  Back onto the topic of Francis latest interview. It can be read in its entirety at the Vatican website, Intervista del Santo Padre Francesco al settimanale “Credere” (Dec 2nd, 2015). Below are some highlights and a synopsis of what was said.

The theme of Mercy has always existed in the church but the special importance placed on it in recent times is a new tradition.  It started with Paul VI, then John Paul II emphasized this strongly with 'Divine Mercy'.  Francis realized,

"it was necessary to do something and continue this tradition."


During the Conclave, Francis was given a book on Mercy by Cardinal Walter Kasper, Francis' first Angelus was on Mercy, as was his first homily in St. Anne's.  This comes not from cold calculation but from inside Francis.  The Holy Spirit wants it!  There is so much badness and cruelty in the world that Mercy is needed now more than ever.

"I felt that Jesus wants to open the door of your heart, that the Father wants to show off his bowels (guts) of mercy, and this sends us the Spirit"


The church is a field hospital of Mercy, judging none but giving them compassion and caressing.  It is sacrilegious to go on living the way we are in the world because we are made in God's image.  God is the Father of Mercy not cruelty.


Francis relates a story from his past which can be summed up by saying that he views religion as a faith experience.  This faith experience is one of the traits of the modernists Pope Saint Pius X wrote of in his encyclical, Pascendi Dominici Gregis (1907).  Francis then goes on to explain the maternal dimension of God.

"Not everyone understands when talking about the "motherhood of God", it is not popular language...so I prefer to use (speak of) a mother's tenderness , the tenderness of God, born from the bowels (guts), paternal tenderness. God is father and mother."


Does this remind you of the rabbi's Shekinah or Leonardo Boff's Feminie Side of God?  During this Jubilee of Mercy we need to have a revolution of tenderness!  When Francis sees the infirm or elderly, he spontaneously caresses them.  It is his way of showing, "I love you."  Every Friday Francis will make a new gesture which witnesses to God's mercy.

Posted by hereisjorgebergoglio at 4:26 PM