"You shall not covet your neighbor's house. You shall not covet your neighbor's wife, nor his manservant, nor his maidservant, nor his ox, nor his ass, nor anything that is your neighbor's."[...] we must reaffirm our belief communities and to all the rich men of sensitivity and wisdom, the need to pursue the path of dialogue that twenty years ago we wanted to start. [...], dismayed to witness horrific acts that profane the name of the Lord, perpetrated by the infamous claim to fulfill His will, we take with concern the increasingly frequent signs of a humanity lost, disappointed by so many that led their followers to false idolatry in paths full of ruins and no future, [...] from the fruitful dialogue we have undertaken, by the search for moral values ​​and Spiritual shared in which work in harmony, can emerge a positive witness of faith, a faith which can restore hope and to turn back the hearts of many to the Lord because it inspires messages of life and peace, a faith that can enrich us in 'soul and to guide us in the choices for our true good, pleasing to the Lord. [...] This path appears as a concrete realization of that "fraternal dialogue" mentioned by Nostra Aetate (4), dialogue with non-Christians approved in 1965 by the Second Vatican Council, which was for both sides a milestone in 'opening of a new era, having called for a dialogue between brothers, between peoples and individuals who wish to grow in awareness and in the comfort of this fraternity: a fraternity for too long hidden and inhumanly hampered, a fraternity that we have not finished yet to discover, a fraternity but manifests itself more and more in its essential and providential actuality.


This statement is so farcical, so full of chutzpah!  The need for Catholics to go to a synagogue and listen to the one way dialogue of Talmudic Judaism.  Not to mention that these same followers of the Talmud consider the believers of Jesus the Christ, idolaters.   It all comes back to the blasphemous document Nostra Aetate, or so the rabbis lead you to believe.  Don't worry, if Catholics would just listen to what the rabbis were saying they could discover the fraternity of slavery by following the edicts known as the the seven Noahide Laws! 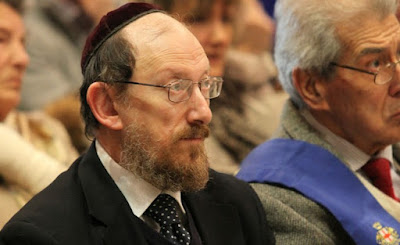