The three (male) Kings no longer come bearing gifts for Our Lord...

...it's now two male Kings and one female King! 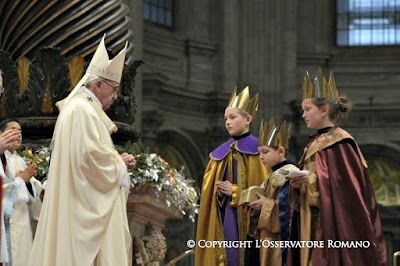 Not even a day had passed in the new secularist calendar year and another novelty comes from Francis the 'Humble'.  Instead of having a procession with three male magi, Francis on the Feast of The Solemnity of Mary, the Holy Mother of God had a procession of two male kings and one female king.  (CMJ's note: from 1568 AD to 1960 AD, January 1st was the Feast of The Circumcision of the Lord and the Octave of the Nativity until John XXIII declared it simply, the Octave of Christmas, which it remained 'til 1969 AD when it became the Feast of The Solemnity of Mary, the Holy Mother of God.)   Notice in the photo above, the girl is dressed not as a queen with a tiara but as a king with a crown.  In the modern times in which we live, with the following men dressing as a women and taking female hormones, Bruce ‘Caitlin’ Jenner, Laurence ‘Lana’ Wachowski, Martin ‘Martine’ Rothblatt, James ‘Jennifer’ Pritzker, Robert ‘Lynn Conway’ Sanders , etc... and the resultant confusion in the secular world which has resulted from exalting and pushing a social order which is abhorrent to God, the Vatican decided to pull this off.  Giving the nod to politically correct sexually aberrant mores is nothing new at the Vatican.  Recall Cardinal Schönborn's delight as fellow Austrian, Thomas ‘Conchita Wurst’ Neuwirth, a drag queen, won the Eurovision Song Contest in 2014.  We can hear the hemming and hawing from the some of the conservative church commentators, ‘Francis didn't know this was going to happen!  It was the evil men who surround him who pulled another trick’.  So who is responsible for the young girl dressing as a king?  Why it is none other than the Master of Pontifical Liturgical Celebrations, one Monsignor Guido Marini.  Michael Voris said of him, “In 2013 Pope Francis chose to keep Monsignor Marini as Master of Pontifical Liturgical Celebrations, because of Marini's traditional formation.”  The blogger Mundabor wrote, “It is for a conservative Catholic very difficult not to like the person and the work of Monsignor Guido Marini. A true lover of sound liturgy”.  The pseudo-conservative Fr. John Zuhl$dorf even put a selfie of himself with Msgr. Marini on his blog.  According to Rome Reports, Guido Marini is, “one of the Pope's closest aides, his discreet work is among the most important in the church.”  Discreet indeed!  We can hear the conservative church commentators, ‘It wasn't Msgr. Marini, for he is a bastion of tradition!’  Oh that's right, he is one of those conservative modernists of the Second Vatican Council tradition.  This brings to mind the BBC News report of the Marini's exchange with Francis after the papal conclave election.


“Minutes after the election result was declared in the Sistine Chapel, a Vatican official called the Master of Ceremonies offered to the new Pope the traditional papal red cape trimmed with ermine that his predecessor Pope Benedict XVI gladly wore on ceremonial occasions.

"No thank you, Monsignore," Pope Francis is reported to have replied. "You put it on instead. Carnival time is over!"”


No, Carnival time just started then.  So if it wasn't Marini according to conservative church commentator logic was it Francis?  Call Me Jorge... believes it was both Francis and Marini with the ultimate responsibility belonging to Francis as he is in charge. 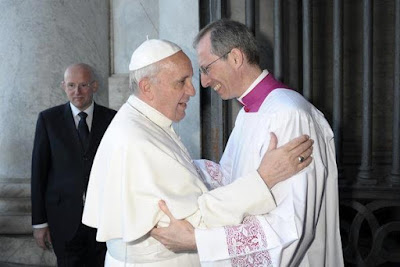 Do they look like they don't get along?
Nope, they appear to be two peas in a modernist pod! 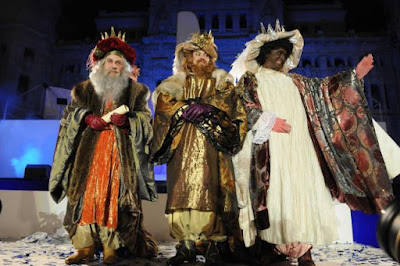 Two of these kings are women.


The Spanish site, La Informacion suggested that Francis was taking a cue from Manuela Carmena and copying what was done in the neighborhoods of San Blas-Canillejas and Puente de Vallecas.  In 2015 Manuela Carmena became the Mayor of Madrid, Spain.  She is an ex-communist who was an opponent of the Catholic dictator, Francisco Franco, and regularly sued him in court.  Earlier in December 2015, Carmena had said the government didn't want to change history and in the next breathe she proceeded to call for women to be allowed to dress as men to play the three kings in the Ride of Kings (la Cabalgata de los Reyes).  Another reason given was that it would help the visibility of women in Spanish culture! 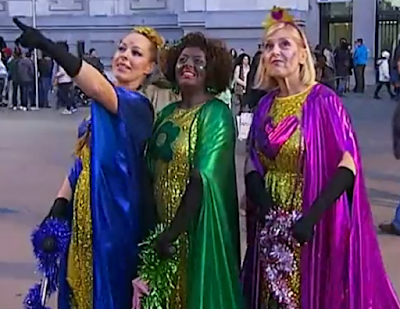 The neighborhood of Cibeles took it a step further and had three queens!


—Why would we think Francis responsible for this?


Francis has said he says foolish things or perhaps heresies...he doesn't know, recently he suggested that Jesus sinned, and he told a woman who had sex-change surgery and takes male hormones, “God loves all his children, however they are; you are a son of God, who accepts you exactly as you are. Of course you are a son of the Church!” when he met with her at a private audience.  Or is he taking a page from Saint John Paul II who loved liturgical innovations.  Every papal trip of his included a new liturgy which incorporated native non-Catholic traditions which was considered a revolutionary act at the time.  Maybe Francis is just going along with the hermeneutics of continuity of Saint John Paul II's allowing girls to serve as altar boys.  If females can dress up as altar boys, surely they can dress up and play a king.  Recall in December 2014, Francis said he sees women as, “strawberries on the cake, but we want more!”  Expect to see women show up in more and more places they do not belong in 2016.  As Francis would say, “God is a God of surprise”.

info Catolica reports this an absurd controversy because Benedict XVI started the modernist tradition of having females dressed as male kings on this day.  They further said since that date, it alternates every other year with 2 boys & 1 girl one year and the next 1 boy & 2 girls in the procession.  Francis is no different than Benedict XVI in his substance, only the styles contrast.  This is another hermeneutics of continuity between the modernism of the two.  Thanks to reflexionar for this comment! 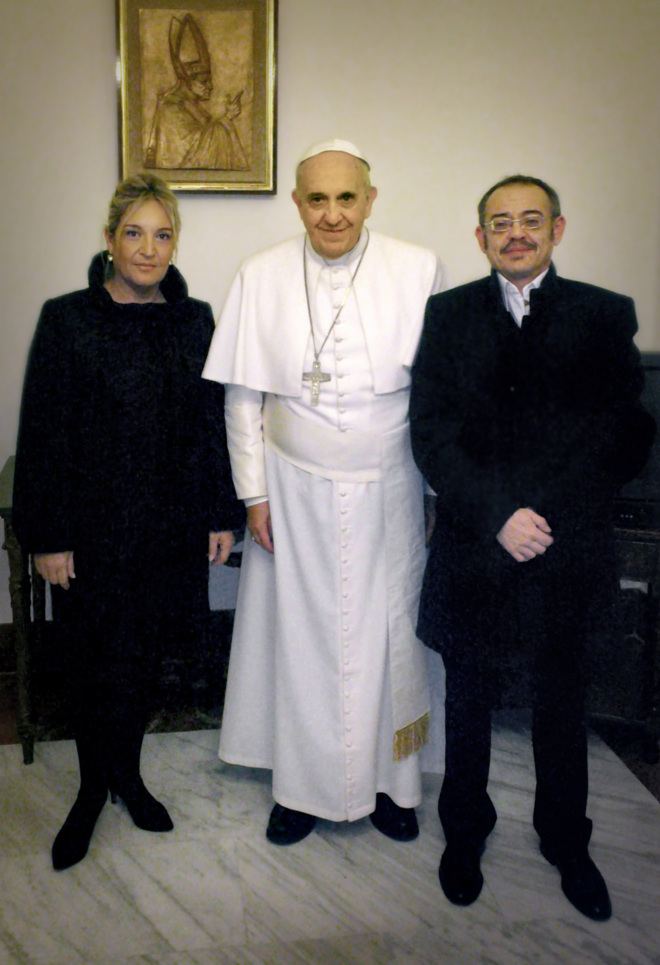 Two women with Francis at the Vatican.  The one with a mustache
is named Neria Lejárraga but refers to herself as ‘Diego’.

Here's the CTV video of the procession in St. Peter's Basilica.

Posted by hereisjorgebergoglio at 7:56 PM