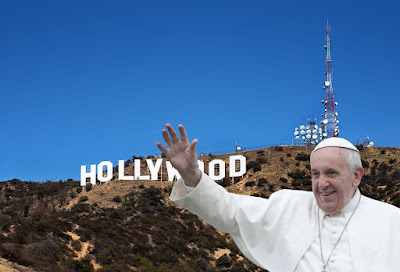 “Pope Francis is already a celebrity, one of the most popular and talked-about figures in the world. So it’s fitting that he could officially become a movie star, playing himself in an upcoming film titled “Beyond the Sun.”

AMBI Pictures, a Luxembourg-based international production company, announced Monday that the pontiff has agreed to play a small role in an upcoming family adventure movie, based on his own suggestion to filmmakers to find imaginative ways to tell the Jesus story to children.
On background, however, a Vatican official on Monday struck a cautious note, saying details of the pope’s involvement are not yet worked out.
Assuming Francis does appear in the film, it wouldn’t be a papal first; he’ll following in the footsteps of his predecessor Pope Pius XII, who made his own cinematic cameo almost 60 years ago.”
[...]

“When and if the papal movie eventually hits theaters, Francis will become the second modern pope to play himself on screen.

In 1958, Pope Pius XII agreed to play a small role in a movie called “Embezzled Heaven,” which tells the story of Teta Linek, a cook for the noble Austrian family of Argan, who thinks primarily of ways to get to heaven.
If the past is prologue, the pope’s participation may not mean a critical free pass on the movie. A 1959 New York Times review, after “Embezzled Heaven” had been dubbed into English, praised it as “inspiring” and “thought-provoking,” but also called it excessively “verbose” and “cumbersome.””