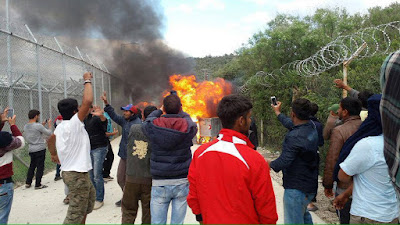 The camp for migrants (aka Moslem invaders) in Lesbos, Greece that Francis recently visited after being invited by Ecumenical Patriarch Bartholomew returned to its normal behavior of rioting, setting things on fire, and throwing stones at police.  In the photo above, look at all the males in their physical prime taking cell phone photos and videos.  One has to wonder are they selling these to the mainstream Talmudic media outlets to make a few dollars on the side as well as to further their planned Moslem invasion of Europe or are they sending these back home to their mothers, wives, and children?

Not to worry though, Francis had told those who want to build walls to keep these Moslem invaders out and who also support the enforcement of borders that they are evil because in these Moslem invaders he sees the face of Jesus.  If it were up to Francis he’d put the residents of these camps into every European town he could because Europe is too rich and needs to share.  How much longer will once Christian Europe continue to take these invaders?  Will they ever go after the plotters of this invasion?  Will they ever wake up and expel these invaders?  Will they ever tire of Francis’ anti-Christian blather?  Or will the Europeans man up (sarcasm) and become good Noahides? 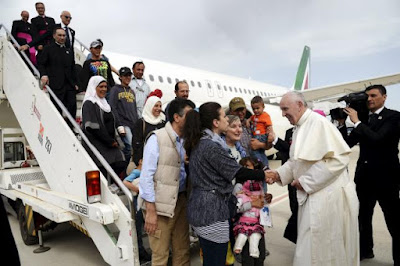 The rabbis and freemasons told me to tell you, “Welcome to Europe!”
Posted by hereisjorgebergoglio at 6:17 PM