a spoon full of sugar helps the revolution go down in a most delightful way!

gatekeeper John L. Allen, Jr. says don’t get bent out of shape with the media and Vatican changing the words of Francis...they have been doing this since John XXIII 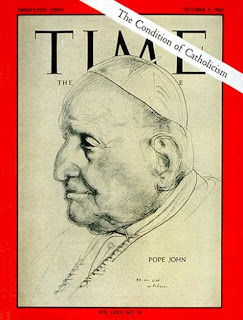 “In the past, the problem with this sort of thing was that it wasn’t always clear it was really the pope making the changes. Famously, an anonymous editor at l’Osservatore Romano, the Vatican newspaper, admitted in a 1962 interview with Time to taking the edge off the words of Pope John XXIII’s speeches about the Second Vatican Council whenever the pontiff said something the editor worried might stir controversy.”

source: CruxNow, Let’s not get bent out of shape over ‘Transcriptgate’

Call Me Jorge... doesn’t have a subscription to Time Magazine nor do we want one to an official rag of the establishment. We did the next best thing though, and searched google books to see if any authors had cited this article. We found one author, Peter Hebblethwaite, who cited it in two separate books on John XXIII. 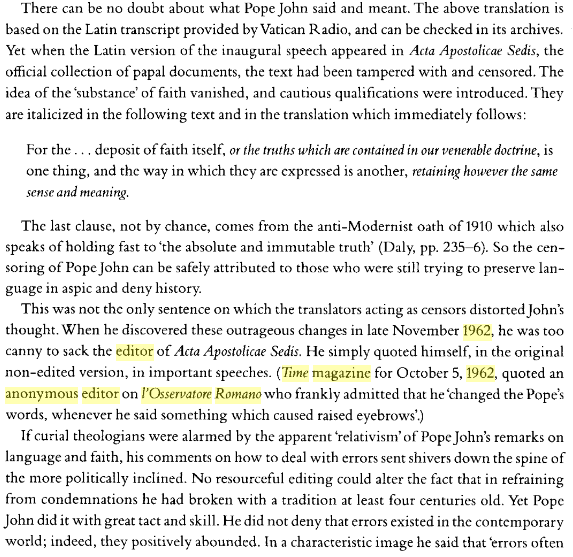 So there you have it!  John XXIII’s un-Catholic remarks were cleaned up and changed to make it appear as if he were a staunch upholder of Catholic tradition in some of the medias and Acta Apostolicae Sedis (Official Acts of the Holy See) when with the benefit of today’s hindsight we know he was anything but this.  This has been done since the pontificate of John XXIII by the media and the Vatican bureaucrats who also have been sanitizing the the words of Paul VI, John Paul I, John Paul II, Benedict XVI, and now Francis.  Why would they perform this disservice to the world?  Are they also members of a revolutionary club?   What has changed with the advent of the internet, is that now anyone can compare what was said by Francis on video to what was published in the medias and official Vatican documents.  Often times these match up perfectly, sometimes they don’t.  How different would the world be today if what was said by the Petrine office (since John XXIII) had been honestly reported on?


Posted by hereisjorgebergoglio at 10:30 AM