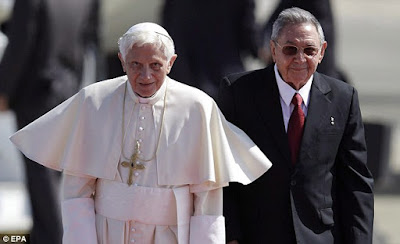 “I need scarcely remind you of how impressed I was in Cuba to see the way in which Raul Castro wishes to lead his country onto a new path, without breaking with the immediate past.” — Benedict XVI 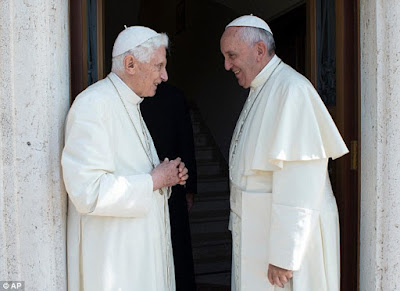 “Obedience to my successor has always been unquestionable. Then there is a sense of deep communion and friendship. The moment he was elected I felt, as many others did, a spontaneous sense of gratitude towards Providence. After two Pontiffs from Central Europe, the Lord set his eyes as it were on the universal Church and invited us towards a broader, more Catholic communion. I personally felt deeply touched right from the start by Pope Francis’ extraordinary human warmth towards me. He tried to reach me by phone right after his election. He wasn’t able to get hold of me so he tried again straight after the meeting with the universal Church from St. Peter’s balcony and he spoke to me in a very cordial manner. Since then, he has given me the gift of a marvelous paternal and fraternal relationship. I often receive small gifts, letters written in person. Before undertaking any major trips, the Pope always comes to visit me. The human kindness he has shown me is for me a special grace in this final phase of my life, which I can only be grateful for. What he says about being close to other people are not just words. He puts them into practice with me. May he in turn feel the Lord’s kindness every day. For this, I pray for him to the Lord.” — Benedict XVI

Sadly, there are those who believe Benedict XVI didn’t resign from the papacy because of grammatical errors in his resignation.  These people also believe that Benedict is a lover of all things traditional in the Catholic Faith, which couldn’t be further from the truth.  Some people project Benedict to be pope spoken of in the private revelation of Fatima and are even anxiously awaiting for Benedict to consecrate Russia to the Immaculate Heart.  The reality is Benedict XVI was a modernist who was under suspicion of heresy by the Holy Office before Vatican II and still remains one.  Benedict has made many public statements (in interviews, letters, and a speech) stating that he is no longer a pope.  Denial isn’t a river which flows through Egypt but is a state of mind of those who refuse to see the truth of the situation for what it is.

Benedict XVI resigned not for Wales
but for Rio and World Youth Day! 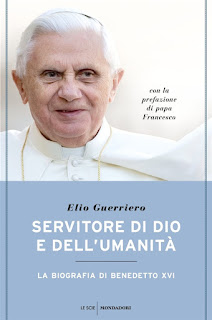 What other bombshells does this book contain?
Posted by hereisjorgebergoglio at 9:02 AM