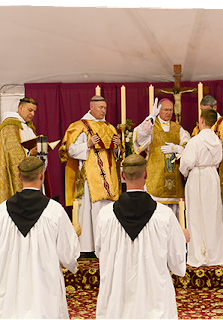 
Earlier this year in July at the ordination of abbé Sabur, in Paris France, Bp. de Galarreta of the Society (FSSPX) gave a sermon in which he talked about a letter which Bp. Fellay had been given by the Congregation of the Doctrine of the Faith which gave the SSPX permission to ordain whomever they see fit regardless of what the local diocesan officials had to say about the matter. Below is a transcribed excerpt of a recent sermon of Bp. Fellay in which he confirmed Bp. de Galarreta's words.

The sermon can be found on the website of Our Lady of Gudalupe Monastery listed as Minor Orders - Sermon of Bishop Fellay.

One can also download or listen to the audio file directly by clicking here.

[Bolding and underlines are Call Me Jorge...’s for emphasis.]

“And there are two ways of incardination. The one is belonging to a diocese and the one the other one is belonging to a religious congregation order. The Church refuses to give this sacrament to let's call them loose, loose cannons, loose priests. They must be under the jurisdiction, under the order, under the obedience and it is very interesting to see that this is one of the major arguments which Rome is using against us to say that we and the uh future priests are suspended. They claim that you are not incardinated so your ordination is illegitimate. This they did since the time when they pretended since they had suppressed the Society.  Now and this is very interesting, and you may understand there the importance of our discussions with Rome.  Discussions we do not deal with so you say making a deal with Rome or making concessions with Rome.  No. These discussion have as a purpose that we request from these authorities which we still recognize as legitimate.  That they do recognize that our action is authentically Catholic, is legitimate.  And one of the we may say last steps which Rome has done is precisely about the ordinations given by us.  In fact, it's about a little bit more than two years now that this is already a fact but as it is done with the subtle Roman politics I didn't even realize that.  As only just now a few months ago that I have received a letter so it's written in black and white from Rome which states, “you can freely ordain the priest of the Society and of course it implies the communities which are with us without asking the permission to the local ordinary.”  So Rome states we can freely ordain our candidates.  That means that Rome does recognize as legitimate the action like the one we took today.  We can see here how far we are from the condemnation from the local ordinary.  But, yes, it is true, it is very complicated, it is a very complicated situation the one in which we are and it is not because of us.  It's because of the situation of the Church which is real...excuse the word a real mess.  They, we do say that this situation of tremendous confusion is the consequence of a Council , Council Vatican II, in which the germs of this confusion have been inoculated into the Church.  And that's precisely because we fight against this because we fight against this disorder that we have been punished. Of course we do say that it is unjust. That's the situation, that's why we continue to do what the Church has always done but it is interesting to see that little by little, in the facts, Rome does recognizes that we exist and that what we do is right.”

Posted by hereisjorgebergoglio at 3:17 PM