the koran verses read in the Cathedral of Bari

Bari, the imam reads the Quran in the Cathedral: “For by Allah we are all equal”


“I never thought of having to demonstrate unity with our Christian brothers, but if they want, we are ready to do it.” In the cathedral of Bari, Imam Sharif Lorenzini, president of the Islamic Community of Italy, responded to the French call for a day of prayer after the killing of Father Hamel in a church in Rouen.  And he chose to read to the 200 present faithful, of which about 50 Muslims, the verse in which Allah speaks of the origin of life: “Allah will appeal to all of humanity, not only to Muslims. It tells us that we are born of a man and a woman, Adam and Eve, they reminds us that we have the same origin.” 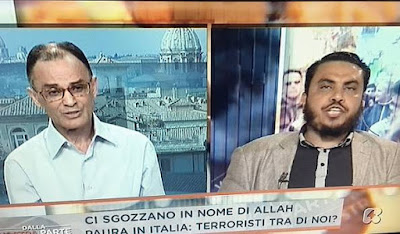 Magdi Cristiano Allam confronts imam Sharif Lorenzini and what he recited from the koran.


The journalist Magdi Cristiano Allam is a Moslem who converted during 2008 at the Vatican's Easter Vigil service but later abandoned the Novus Ordo church because it was too soft on Islam. He says he remains a believer of Jesus the Christ and a Christian.  On national television in Italy (Rete 4), Magdi Cristiano Allam confronted the Imam Sharif Lorenzini about the verse he sang from the koran in the Cathedral of Bari,


“The guest of Belpietro on (the television program) ‘On Your Side’, the imam Lorenzini was questioned by Magdi Cristiano Allam: “You have to say what you read in church.  You, during the meeting in the cathedral, have read the opening of the Koran.  Or the verses that recite these words ‘Allah guide us to the straight path, the path of those who have been blessed, not of those who have incurred Your wrath, nor of those who wander in error.’  Then Allam provides that claiming to be the most common interpretation of the verses:  “All Muslim theologians agree that ‘those who have been blessed’ are Muslims, ‘those who have incurred Your wrath’ are the Jews, ‘those who wander into error’ are Christians. So you’re in the church actually reading verses concerning the disbelievers, ie Christians and Jews.” ”

Let’s recap we have Francis washing the feet on Moslems on Holy Thursday, Francis marching arm-and-arm with Moslem invaders at a general audience, parishioners told to say the Rosary in church in silence so as not to offend Moslems, Francis tell Poland’s bishop to welcome more Moslems into their country, the koran being read at Christmas Mass, Ramadan being celebrated in church, symbolic communion given to Moslems during the Novus Ordo Missae, Moslems sleeping in churches, Francis constantly saying that Islam is a religion of peace, one of the Moslem refugees Francis helped bring into Italy call him ‘the First Moslem’, Francis say Moslems, Talmudic Jews, and Christians all worship the same God, etc... And now we have an imam come into a Cathedral as a show of fraternal solidarity because two of his fellow Moslems murdered a priest and he then proceeds to read a verse against Christians in it!  Who invited these people to Europe?  Whose country is it?  Who are the conquerors?  Who are the conquered?


To read more about Abp. Lefebvre’s above statement click here.

Posted by hereisjorgebergoglio at 12:13 PM