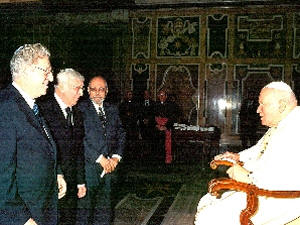 
John Paul II received in a private audience 160 Jewish leaders, rabbis, cantors and their relatives.  It was unprecedented in that never before had so many rabbis set foot in the Vatican at once and they were there to meet John Paul II!  It was requested by the Pave The Way Foundation located in New York, United States of America.  John Paul II’s Talmudic Jewish friend, Gary Krupp, proposed the meeting as a way to show thanks to John Paul II for combating anti-semitism.  The Pave The Way Foundation prides itself on working behind the scenes and achieving concrete results in the furtherance of their mission.  One of their previous victories in 2002 was getting papal permission for Talmudic scholars and rabbis to have access to the Vatican Library where they can view and study the original works of Maimonides (aka the RaMBaM).  This mission was aptly named the “Maimonides Project”.  Another success was receiving permission for a loan of manuscripts of Maimonides and others, from the Vatican Library, to the Israel Museum, for its fortieth anniversary exhibit during the upcoming summer of 2005.  Among the items were:


At the audience, three rabbis blessed John Paul II as well as a group of cantors who sang a special blessing, the Shehecheyahu.  John Paul II addressed them with these words,


“May this be an occasion for renewed commitment to increased understanding and cooperation in the service of building a world ever more firmly based on respect for the divine image in every human being.  Upon all of you, I invoke the abundant blessings of the Almighty and, in particular, the gift of peace.  Shalom aleichem.”

the historic meet and greet

Posted by hereisjorgebergoglio at 12:17 AM