Remember back on 24 October 2015 when Eric ‘the great monarch’ Gajewski interviewed John Salza about his new book and Fatima?  Well, it appears that indeed ‘the great monarch’ takes orders from his spiritual mentor Paul Kramer.  Why do we say this?  For the simple reason that Eric has thrown his Salza interview down into the memory-hole.  It turns out recently Kramer has been attacking Salza and Salza has returned the favor — so the head of the ‘order of eagles’ made the interview disappear.

Here are the links to their respective websites if one is interested in their ongoing cat fight:

Thanks to the internet one can still enjoy all the lunacy of these two clowns. 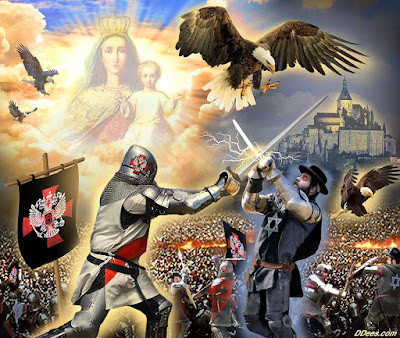 Dear supporters of TradCatKnight are you in agreement with how your donations are being used?  Gajewski commissioned artist David Dees to make this picture of ‘the great monarch’ leading his make-believe ‘order of eagles’ against some other group of make-believe soldiers.


A 100% guarantee this post will not be copied and pasted by Gajewski to his blog like countless others from Call Me Jorge... and so many other blogs have been!

Posted by hereisjorgebergoglio at 10:57 AM