Francis tweets about the Talmudic concept of the “Other” 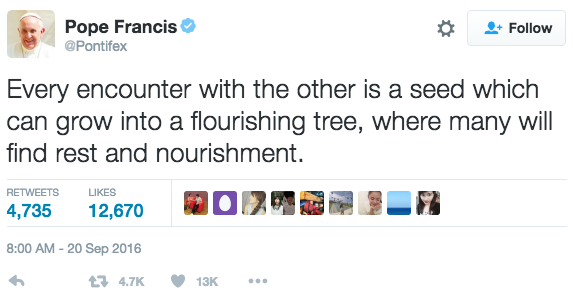 
Francis tweeted the above before he went to Assisi, Italy for the final day of the Assisi V — Interreligious Prayer Meeting for World Peace.  Many on social media were confused by this tweet and thought it out of place and odd.  This is far from the case.  Francis is practicing alchemy on his church and  putting the finishing touches on the transformation of it.  We previously covered the Talmudic concept of the “Other” on this blog in the entry, the hermeneutics of talmudic alchemical continuity — John Paul II, Levinas, and Francis, which explains how this Talmudic idea took root in Francis’ brain and what the “Other” is.  We further demonstrated how the rabbis and church officials are adopting the “Other” in the following post, Catholics don’t understand their faith so the Talmudic Jews explain it to them.  One can be certain that when Francis and his associates are finished with their alchemical magic, the people in the pews of the Novus Ordo churches will have adopted a noahide attitude and will not recognize Jesus the Christ as the Messiah.


Every encounter with the other is a seed which can grow into a flourishing tree, where many will find rest and nourishment.
— Pope Francis (@Pontifex) September 20, 2016

Posted by hereisjorgebergoglio at 2:57 AM