If you are a dove and see Francis coming, run away! 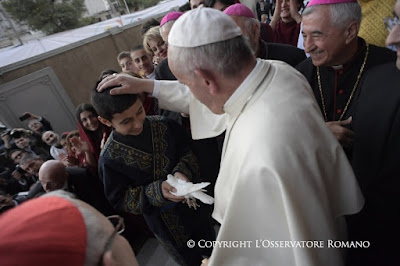 
The German blog Nur ein Kreuzknappe (Only a Crusader’s squire) reported earlier today that on Friday evening a peace dove Francis released skyward promptly flew smack dab into a wall!  No, we at Call Me Jorge... are not kidding.  The peace dove really did fly into the wall surrounding the courtyard of the Church of St. Shimun Bar Sabbae in Tbilisi, Georgia.  Francis was at the church to pray with, meet, and speak to the Chaldean and the Assyrian Catholics of Georgia on Friday, 30 September 2016.  Social media went into a buzz — wondering what had happened to the poor bird.  Thanks to the reporter Alan Holdren, who is covering the papal trips to Georgia and Azerbaijan for the Catholic News Agency and EWTN, we have the answer.

We couldn’t think of a more blatant sign of Francis’ rule than a dove of peace blindly taking an impromptu flight into a wall and falling to the ground.  Thankfully the bird was unhurt, unlike all the souls Francis is leading to perdition with his un-Catholic pronouncements and behaviors.


Remember the peace doves kerfuffle of 2014?

Maybe in the future, Francis will want to request children in foreign countries hand him ‘balloons of peace’ to release skyward as he now does at the Vatican or better yet the doves of the world could unionize.

Posted by hereisjorgebergoglio at 2:59 PM