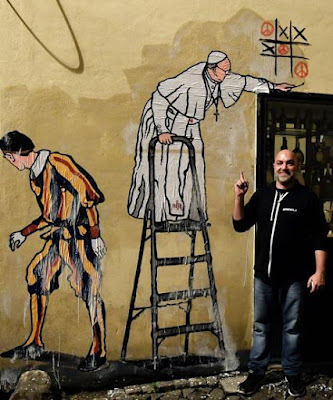 The street ‘artist’ poses with his latest creation.


Another one from the you can’t make this stuff up file. The Italian street ‘artist’ MAUPAL (Mauro Pallotta), famous for his previous work — SuperFrancis, slapped another piece on a wall on Borgo Pio near the Vatican City State. Since we at Call Me Jorge... have not seen a name for the piece in the Italian media nor heard an official statement from Mr. Pallotta, we will call it GraffitiFrancis. 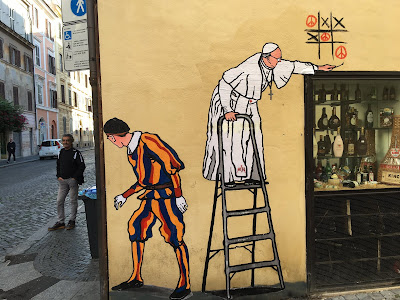 As one can see from the photos, Francis is busy graffiting a wall with a tick-tack-toe game while a Swiss guardsman is on the look out for the Roman authorities. We assume after Francis’ turn is finished the two will switch roles and start another game. 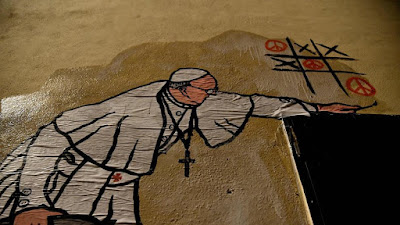 What is interesting is the symbol Francis is painting instead of the usual ‘O’ in his tick-tack-toe game is the ‘peace sign’. The peace sign was popularized by the Fabian Socialist-Communist, Bertrand Russell, and purportedly created by Gerald Holtom in 1958 to represent ‘nuclear disarmament’.

The N & the D come from the British Navy’s semaphore flag
signalling system.  Where the circle comes from is a mystery.


This symbol has had many uses before its modern day version.  One of which was the Saracens using it in battle verses the Christians in the early 8th century. These Moslems believe it symbolized the breaking of the Christian Cross.  We at Call Me Jorge... would suggest another interpretation more suitable to Francis.  The symbol is an inversion of the orphrey cross on the chasuble a priest wears when offering the Tridentine Latin Mass. 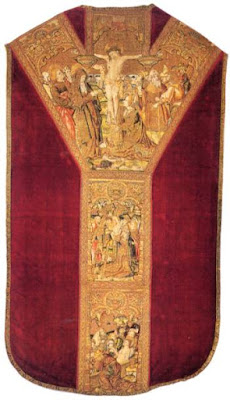 A chasuble worn by a priest.


Francis is always focused on man and seldom on God.  Not only has he inverted the hierarchy of the church but also the Gospel.  The Novus Ordo Missae is man-focused and created by man.  It was not instituted by Jesus the Christ.  In this piece of street kitch, Francis is doing something illegal (graffiti) and using one under his command to assist in this crime — how apt! 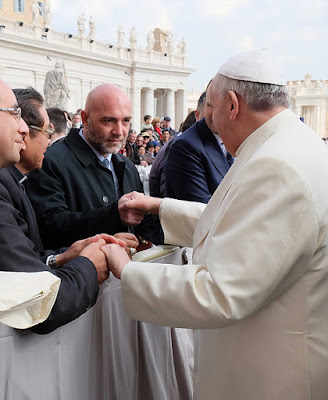 Mauro Pallotta meeting with Francis at the general audience of 26 February 2014.

Thankfully, the Roman authorities have removed this blight.  Let’s hope they get on with the rest of the graffiti which sadly covers Rome.

Posted by hereisjorgebergoglio at 11:08 AM