Francis, “believe me, in my pastoral work, there is no place for homophobia.”


Francis, back in 2008, when he was known as Cardinal Jorge Bergoglio told this to his sodomite friend Yayo Grassi.  Is there a place for homophobia?  Is it unhealthy as Bergoglio was implying?  If one looks at Bergoglio’s past behavior and his present actions as Francis never does he perform pastoral work with homosexuals.  He instead welcomes them, condones their deranged sinful behaviors, and tells them that they are part of his mockery of a church which stands for anything and everything but the Catholic faith given to us by Our lord, Jesus the Christ.  Does Francis have no place for scelerophobia as well?  Who is he to judge?  Isn’t condemning ‘homophobia’ a judgement?

Below is a video as well as a transcript of what Francis’ long-time friend, Yayo Grassi,  said about the man.  These remarks took place at New Ways Ministry’s Bridge Building Award Ceremony and were wink, wink ‘impromptu’.   New Ways Ministry is in the Vatican’s official penalty box, at least that’s the public position.  They however have many allies on the inside who must agree with their belief that homosexuals are born that way and homosexuality is not a sinful nor an abnormal behavior.  One of these is the secretary to both Benedict XVI and Francis, Archbishop Georg Gänswein.  Back In February 2015, Gänswein gave front row tickets to the two head honchos, Sister Jeannine Gramick and Francis DeBernardo, at New Ways Ministry.

Grassi was there to watch and give his support to James Martin, the editor of the Jesuit magazine America, receive the Building Bridge Award.  Martin who we have earlier covered in this blog posted a photo with Martin Luther that strongly implied he was a saint to his America magazine and facebook page as well as runs with crazy things attributed to Francis such as “paradise is open to all of God’s creatures.” As we wrote previously of Martin, “Apparently if you can fog a mirror, the Novus Ordo church wants you as an editor.”

Mr. Grassi was previously written about on Call Me Jorge... when he and his male homosexual boy toy had a private audience with Francis when he came to America.  Grassi speaks of this visit and others in the video.  This audience happened the same day that Kim Davis met with Francis but thanks to Thomas ‘three Marinis a day’ Rosica, the English language media attaché of the Holy See Press Office, we know it was all a big mistake...the Kim Davis meeting. Francis may not believe in homosexual lobby at the Vatican but this blog, judging by the behaviors of James Martin and Thomas Rosica makes us wonder if they are members of a Vatican homosexual club.

One of the first things in the video, the listener will hear Yayo speak of how upset he was when he heard the Argentinian media say his good friend, Jorge Bergoglio, was against homosexual marriage.  Yayo Grassi wasn’t the only homosexual to get his panties all in a bunch, so did pro-homosexual activist, Marcelo Marquez. He also wrote a letter explaining how he was offended and less than one hour later his phone rang and on the other end was Cardinal Bergoglio stating, “I'm in favor of gay rights and in any case, I also favor civil unions for homosexuals, but I believe that Argentina is not yet ready for a gay marriage law.”

Francis is always making a judgement even when he judges that he, himself, is not fit to judge.  When it comes to one of the four sins that cry to Heaven for Vengeance, sodomy, Francis is often coy and vague about his position on it leaving it up to the listener to fill in the blanks.  When he isn’t the mainstream and Novus Ordo presses pretend as if he never said anything.  If one takes the time and examines his actions over the years as we did extensively in the entry, Francis takes his ‘Jubilee Year of Mercy’ to its logical conclusion, another picture emerges.  This is of a pontiff who tries to keep all his flock in perpetual confusion as he transforms the Novus Ordo religion through pilpul into a noahide golem of Orthodox Rabbinical Judaism.  And without further ado we present Yayo...

“I have known Pope Francis since he was my teacher, my professor in high school when I was seventeen years old. I know that he knew then that I was gay, and we have been friends ever since. I visited him in Rome and then we visited when he came to Washington. He met who was at the time my boyfriend both times, and he’s always asking about him.

When the gay marriage law was being discussed in the Senate in Argentina, I read on the internet that then-Cardinal Bergoglio was very much against it and that he had said really painful and hateful things about the approval of the law. I was very surprised. I was very surprised more than anything else because knowing him, and knowing how much love there is in his heart, it was difficult for me to understand that he would do such a hateful thing. Words like this [inaudible] word from God this is a temptation from the devil etcetera.

So I wrote him a quite extensive letter. I sent him an email telling him how much I admire him, how important he was in my life, and how much he did for me. How he had brought forward through his education the most open and progressive thought in my life. And then I went on saying, I will never be able to thank you, so you might think its a very strange way to thank you if I tell you I’m very disappointed by the way you treated the gay [marriage] law.

And I went on with the explanation and the letter was too long and very personal, so I will not go into it. He replied two days later and the first thing he said was, ‘first of all was I want to ask you to forgive me because I realize that I have, you are hurt. Believe me I never said any of those things. The press picked out from two letters that I sent to the nuns asking them not to give any kind of opinion on this, and they were distorted and they were put as my words.’

But the most beautiful thing and to me the most amazing thing and we are talking about 2008. He ends up his letter besides asking me, ‘to pray for him’ as he always does, saying, ‘Yayo, believe me, in my pastoral work, there is no place for homophobia.’ And that is the first time that I realized what an amazing person he was. He not only said, ‘Who am I to judge?’, there is something very important that he said later, he said ‘Who are we to judge?’ But that we wasn’t just personal, the we was the whole church, and the whole humankind.” 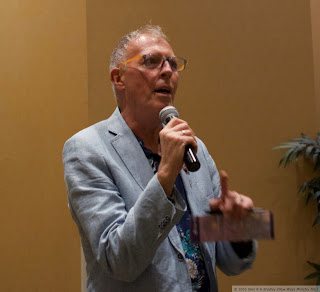 Yayo Grassi with his ‘impromptu’ address. 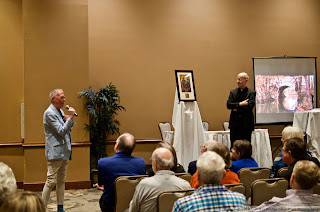 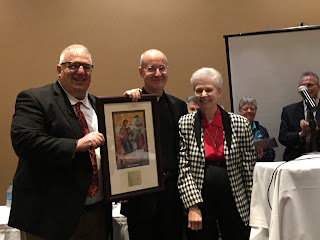 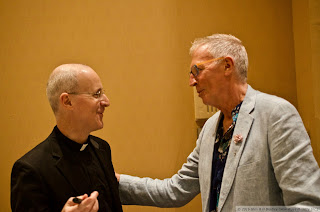 James Martin and Yayo Grassi
Posted by hereisjorgebergoglio at 3:57 AM