Featuring Communion in the hand!


...and yes that was right in front of Francis. 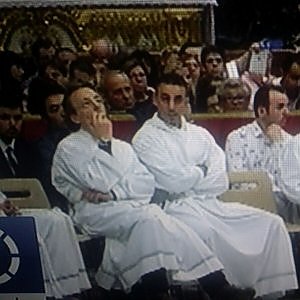 Issam is center and looking at the camera.


Issam a prisoner of the Busto Arsizio penitentiary had a special role to play.  Before the Novus Ordo Mess began, he alone washed the hands of Francis in the sacristy.  Issam asked one request, on the trip, of his warden — to bring along his Moslem prayer rug and say his prayers.  He did this once on the way from the prison to the Vatican and once somewhere on the premises of the Vatican!  Issam, a 34 year old ‘refugee’ hailed originally from Morocco but was smuggled 20 years ago into Italy from Libya.  Once he arrived in Europe, he entered school and graduated then he became an alcoholic and drug addict who committed a slew of crimes to feed his addictions. Issam said, “It seems strange to say but being in prison has saved me. I was arrested six years ago for a heap of crimes and I still have four more years to be served. Behind bars I was strengthened in the Muslim faith that I had since childhood and this has changed me: now I study [the Koran], I do not do drugs, I do not drink and I have found inner peace.”  Thanks to Jorge Rondón Santos who sent us this information.  Issam’s full name is Issam El Jyad.  He is serving his time in jail for sexual assault, trespassing, aggravated assault and stalking.  Issam repeatedly tried to rape a young Romanian woman living in his apartment building in Cardano al Campo as he figured she was an easy target.  When the prisoners met Francis, Issam was chosen by his fellow inmates to present Francis with the gift they had made for him in the prison’s bakery — a chocolate key of St. Peter’s.  Asked why he wanted to be an altar boy Issam replied, “To make people understand that we Muslims are different from what some would have you believe: we are for peace,” and continued later, “If the popes pray in mosques why shouldn’t I do it in the Vatican? I remain Muslim but together we can pray for each other, for peace, for the world. And this Sunday, I did this.”  Of Francis he excitedly said, “His words took away my breath away. He prayed for us prisoners.  We heard him say we are no longer the last, the excluded.”  Don’t expect Issam to abandon his false religion and convert anytime soon, “I remain a Muslim but I believe in dialogue and respect.”

Let’s recap what Francis has done since his reign began. (By no means is this list exhaustive.)

What’s next?  A Moslem Imam offering the Novus Ordo Missae?


Francis’ revolutionary Mess in its entirety

Posted by hereisjorgebergoglio at 6:03 PM