Who did Bergoglio celebrate Christmas with? 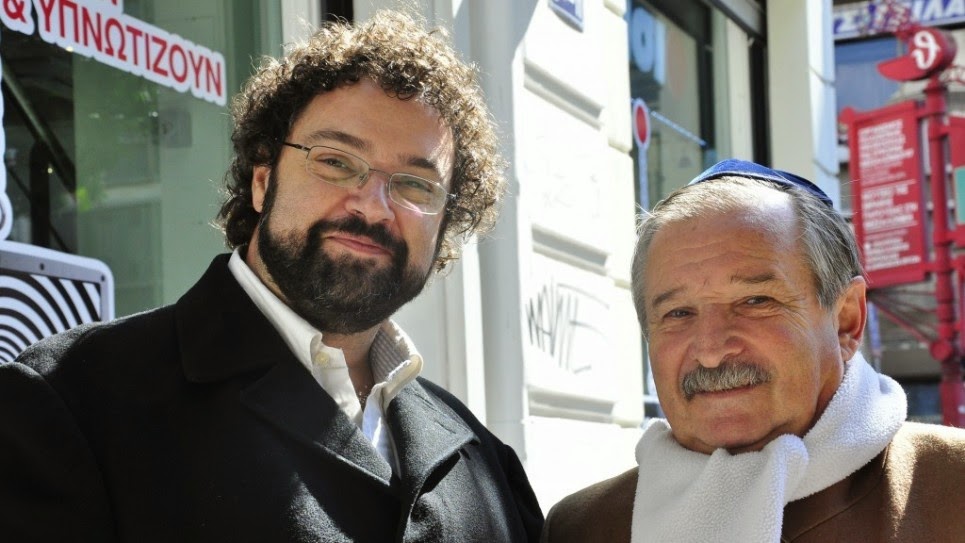 
Dear readers, who do  you celebrate your Christmas dinners with?  Your loved ones and your family, are we right?  Well Francis, back when he was Cardinal Bergoglio spent his Christmases with his relatives didn't he?  Or maybe with some fellow Novus Ordo priests and nuns?  Nope, the man never ceases to amaze.  Bergoglio spent Christmases with Talmudic Jews, the heirs of the Pharisees from the Old Testament.  You know those guys who are always following the ‘traditions of men’ or what we now call the ‘oral tradition’ aka the Talmud.  A tip of the hat to Martina Katholik for sending us this news story!  The Times of Israel: ‘Our Christmas dinners with the pope’ by Gavriel Fiske

According the website of the Archdiocese of Buenos Aires, Bergoglio gave the homily on these Christmas Eves: 2001, 2003, 2004, 2005, 2006, 2010, and 2011.  One wonders if the great Rabbi Bergoglio also participated in the kabbalistic ‘Nittel Nacht’ traditions which take place on both Christmas Eves; tearing toilet paper, referring to Christmas by derogatory names, avoiding Talmud study, reading the Toledot Yeshu, playing cards, playing chess, sewing (the favorite of the late Lubavitcher Rebbe, Rabbi Menachem Mendel Schneerson), paying bills, balancing the books, or spinning the dreidel.  Who will Francis have over at the Vatican this year as his guests and will they celebrate the Talmudic hoax, Hanukkah, which glorifies the supremacy of Klal Yisroel (the Judaic people) over the rest of humanity?  As always the underlines are ours for emphasis.


‘Our Christmas dinners with the pope’

Argentina’s Jewish leaders describe an extraordinary relationship with Francis I, who comes to synagogue for ‘selichot’ and loaned out a cathedral for a Shoah event

THESSALONIKI, Greece – Cardinal Jorge Mario Bergoglio of Argentina made history last week by becoming the first pope from Latin America and the first from the Jesuit order. This week, Argentine Jewish leaders, attending a World Jewish Congress meeting in Greece, predicted a new era for Catholic-Jewish relations and described a man who is very close to the Jewish community, who regularly visits synagogues and has invited Jewish friends to Christmas dinner.

“I think it is the first time a pope has been elected that the Jewish community knows previously, and has a long history [with],” said Claudio Epelman, director of the Latin American Jewish Congress, speaking to The Times of Israel on the sidelines of the weekend meeting, held in the northern port city of Thessaloniki in conjunction with public events memorializing the near-destruction of the ancient Sephardic community during the Nazi occupation of northern Greece during World War II.

Epelman said Sunday he was “very, very optimistic” about Catholic-Jewish relations under the new pope, who took the name Francis I and has embarked on what has already been described as a humble, hands-on papacy, eschewing the pope-mobile in favor of shaking hands and meeting children on his first Sunday in office amid the vast crowds at the Vatican.

“He is a real friend of the Jewish community,” he continued, describing Francis as “totally committed to interfaith activities.” He “loaned out” the Buenos Aires cathedral to the Jewish community to hold a memorial event honoring the victims of Kristallnacht and the Holocaust, Epelman recalled.

“I have been with him many times,” Epelman said, “not only for organized meetings and activities, but also just to discuss and learn from each other. I’ve never spoken about it, but for the last six years I have had Christmas dinner with him, just myself and a few others. It is very private, very intimate… It’s a major holiday to share with a Jew, and he is very kind to hold the dinner.”

Julio Schlosser, the other Argentine delegate in Greece, who is the president of a Buenos Aires synagogue, called Francis “my friend and a friend of the rabbis” who is “very close to the Jewish community.”

Schlosser described how for “many years,” Cardinal Bergoglio has come to his synagogue for selichot (the series of evening penitent prayers held before Rosh Hashana), where he would also give a formal talk.

“It’s very important for the world Jewish community to have somebody like this [in the papacy] because he is very open,” Schlosser added. “He works for the relationship between the Church, not only with the Jews, but with Muslims and other communities.”

Schlosser, who has also had Christmas dinner with the pope, confirmed that Francis I often prefers public transportation to his official car. After a visit to the AMIA Jewish community office building (which was bombed 19 years ago by alleged Iranian and Iranian-backed operatives, with the loss of 85 lives), Bergoglio eschewed his official vehicle in favor of the subway, he said.

Overall, “everything is fine” for the Jews in Argentina, he said, except that “Argentina, Venezuela, Ecuador, Nicaragua… are leftist-run countries who by extension have close relations with Iran.” And despite the recently announced joint Argentine-Iranian probe into the AMIA bombing, he said, “Iran will never accept responsibility for it.”

Schlosser may have an opportunity to discuss these and other issues with his friend the pope in person: He and Epelman left Greece Monday to arrive in Rome as the pope’s personal guests for his Tuesday inaugural mass.

"We believe we can make a contribution to the world, us 45 traveling Argentineans," said Epelman who spent seven Christmases with then Cardinal Bergoglio at Mass and afterwards at dinner.

Previously, he was the only Jewish observer of General meeting of Latin American and Caribbean Bishops in Aparecida in Brazil where the agent was Bergoglio and thereafter met the present Pope."

For more information on the hateful Hasidic ‘Nittel Nacht’:

Posted by hereisjorgebergoglio at 6:45 AM